I know they make vinyl cutting drag knives but I wanted to know if anyone has tried the diamond tipped drag knife on the adhesive vinyl wrap? The only vinyl drag knife I could find was $175 and I am getting into vinyl to save money…

Plans for making your own at: https://www.shapeoko.com/wiki/index.php/Spindle_Overview#Drag_Knives

I have the DIY drag knife (2nd from the top on WIll’s link list). While it cuts well, it’s the software that needs work. Meaning you can’t just use standard text, because of the way that the knife turns (rotates). It leaves round edges rather than crisp square corners (see photo)…Meaning, you need a knife AND special software…IMO. Edit: And a REALLY FLAT and LEVEL Table (TIR 0.002")

Good luck, and enjoy the hunt. 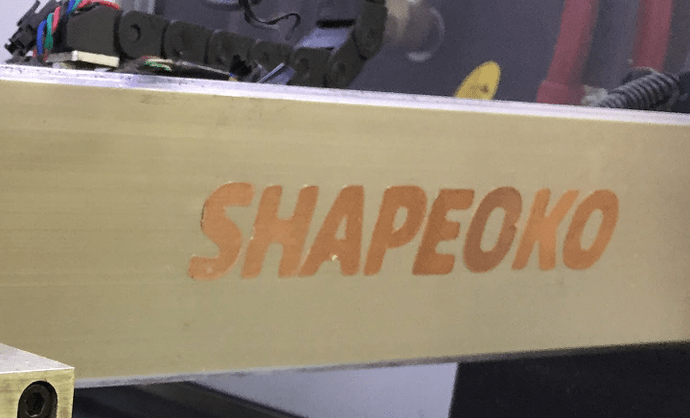 The Donek drag knife folks have posted an Excel spreadsheet which will add the extra moves needed at corners.

Sweet thanks, I will look into it. I found this tool for $65 on eBay:
https://www.rockcliffmachine.com/product/cnc-drag-knife-bit-0-250/

I also found replacement blades on amazon for cheap, albeit I don’t know if they are compatible. Here’s to hoping it works

That looks a lot like the Cricut insert and blades. Some people have reported success with the Cricut installed in the spindle on CNC, haven’t had time to research it, but have seen them at Michael’s and other big box craft stores.

It should be feasible to do the same with a modified S3, but it’d need to use a different controller that can handle the extra axis. And also, software would be needed to do the rotation bit too. It might an interesting project for someone (not me).

If you google ‘Cricut blade in CNC’ there is an Instructable and Hackaday, it also returns info about Roland cutters modified for CNC’s.

I think the rotary control is for one specific knife blade body. If you could modify it to fit in the collet, enter the offset, you can probably bypass the additional driver/servo/commands. Just don’t energize your Spindle with the drag knife installed.

On many of the drag knives used in those machines, the blade itself is free pivoting with spring loading (at least, most roland based ones are, like the sillouhette) - if you mounted in the spindle (plausible) it should work fine if the blade depth has been set properly in the holder AND the Z is set properly (a little tricky, but not hard). The extra axis on the silhouette is there only for whether the blade is in contact to cut or not - which can be readily done with Z. Interestingly, many of these machines run hpgl, which is pretty readily converted to gcode (some run gcode, some run both).