Is there an accepted way to calculate a starting depth per pass?

There’s some information on this here: http://www.shapeoko.com/wiki/index.php/Materials#Feed_and_Speed_Calculators

r/shapeoko: Do you use a ShapeOko CNC machine? Learn and Share with us!

and maybe a bit more here.

There have been some really helpful posts on this here, but I think they all got linked into the above pages — let me know if I missed any.

I’d check out Will’s page. Without knowing material, tool, etc it pretty hard to recommend anything specific. However, we usually recommend going 1 diameter deep per pass or 1/2 diameter deep for harder to cut materials. You can also go shallower than this if you need to (usually preferable to going too slow with your feed). However, going less than 1/2 diameter per pass you run into radial chip thinning which can mean you need to increase your feed further to eliminate rubbing. (Good info on rubbing and chip thinning here (Link))

If I can be of any help please let me know.

I’ve had trouble with even 1/2 diameter in aluminum, I seem to get horrible chatter no matter what I do. And suggestions? I’ve been using G-Wizard to attempt to get something reasonable, but it’s just not working out for me (Nomad 883 pro). At .01in, 10 in/min I still get terrible finish. .06in, 5 in/min looks terrible, leaves lots of chatter, particularly on the plunge, even with the plunge at 2in/min. Have tried both single flute and 2 flute 1/8" square mills.

Do you know what grade of aluminium you have attempted to mill? @mikep
As Nick said would help to know the grade as aluminium runs a huge range in machinability. From the numbers and description you listed I would guess your feed is too slow. You are probably not getting good tool engagement and rubbing the tool which is contributing to your chattering. I’d try your lowest plunge of 0.01" and start the cut at 25 IPM at 10,000 RPM (2% total chip load). Keep in mind these are off the cuff numbers and obviously assuming at a minimum decent tooling speced for metals. Try to keep recutting the chips to a minimum. Cutting fluid, and coatings for aluminium cutting are also quite helpful. Assuming that gets you a decent cut work your way up in feed or deeper passes. If that seems too high of cutting forces for your machine keep the feed numbers up and reduce your plunge.

I’m not so sure any more what alloy it is. I was under the impression it was 6061, but it’s a “drop” and the segments I’ve got aren’t marked.

I’ll give what you recommend a try and report back.

This has got to be 5052 or something like that. Still getting a lot of chatter, though it’s better. What threw me, I think, is that it’s got a ground surface, and the factory cut edges actually look really good.
There was actually pretty good chip clearing while this was running, lower radius still looks terrible. Chatter really clearly visible on the outer wall. 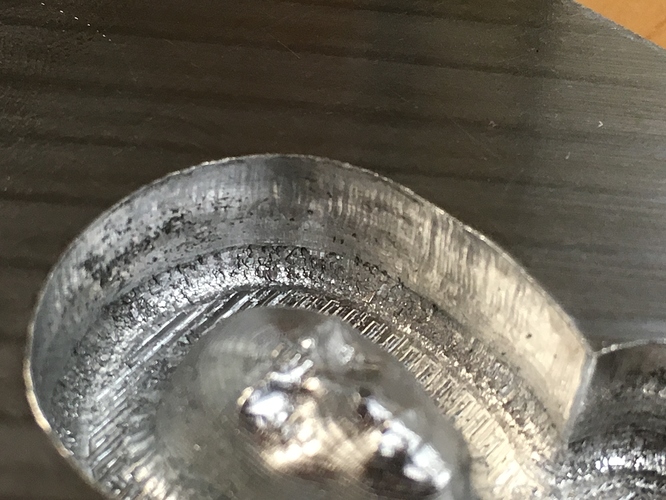 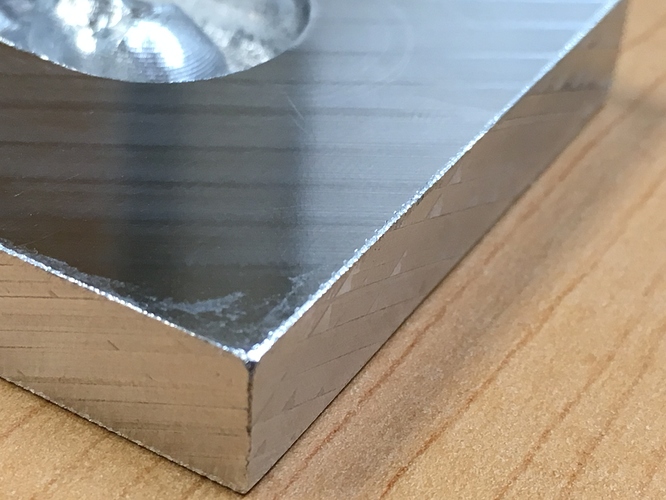 Chatter in the waterline finish passes. 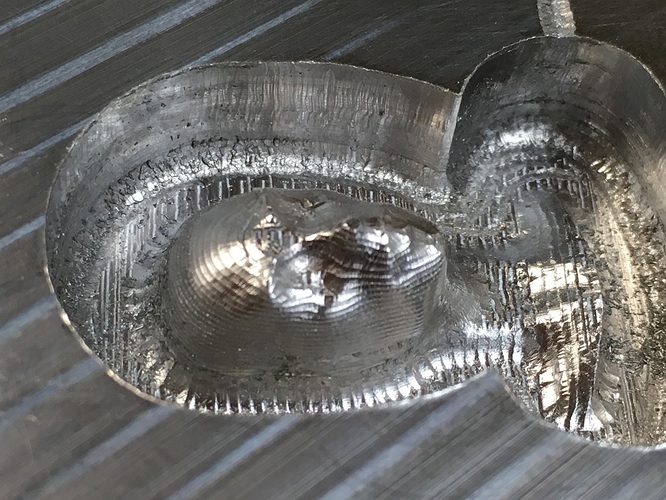 @mikep
Yeah, that doesn’t look like 6061 to me. The bottom corner cuts and the broken edge on the corners of the block look like a much softer grade. You can try feeding faster (bigger chip, better cut in this case) but I would try a sweet spot test first (can find the link in Will’s page posted above). Possibly the bigger issue though is going to be chip clearing. ANY material getting recut is going to be a pretty big issue. Cutting fluid would buy you some forgiveness but I don’t know if you have the ability to use any. You could also try keeping compressed air on it to blow the chips out as you cut.

Assuming a grade in the 5000 series I would probably be looking at feeds in the 40+ IPM range to get a decent cut (depending on tool geometry and quality). That’s of course assuming the machine and tooling you’re using can keep up. To be clear I’m not trying to beat up on anything. I just honestly don’t know the machine well enough or what tooling you’re using to have a good guess.

@Qwkpony
Composites are what diamond cut bits were designed for. As they have more of a grinding geometry than a cutting one they are usually used full plunge. You can reduce the plunge depth or feed if you are getting deflection in the cut.

The 2 flute tooling is a whole other issue. They don’t handle composites like this well as they have very little cutting surfaces compared to the diamond cut routers. If you have to use them try to keep the depth of cut low (.010) as it’s going to have a hard time with the glass in the FR4. Also keep in mind that you will dull these VERY quickly so if you need a decent number of them I’d look at getting some different tooling.

One last thing. As I mentioned above FR4 is glass loaded. You need to be VERY mindful of the dust as you don’t want to get the glass in your lungs. Make sure you have proper vacuum, dust collection, etc.

Because @mikep is getting chatter it would suggest to me that it is a harder alloy. If it were a softer alloy I think it wouldn’t chatter rather it would be “guminess” that would be the problem. A very rough and simple way to get an idea of the hardness of the aluminium you have is to use a utility knife to cut a small slither off one of the edges. If it slices fairly easily and cleanly it is likely to be 6061 (or 6082 here in the UK).

The other thing to consider is that you piece of aluminium may have a different temper for some reason increasing the hardness.

Possibly the bigger issue though is going to be chip clearing. ANY material getting recut is going to be a pretty big issue. Cutting fluid would buy you some forgiveness but I don’t know if you have the ability to use any.

Was getting an occasional dab of oil in there (about the best I can do), had two strong streams of compressed air blowing chips out of the cutting area. I think what I’ll do is get a hold of some known 6061 and see where that gets me. 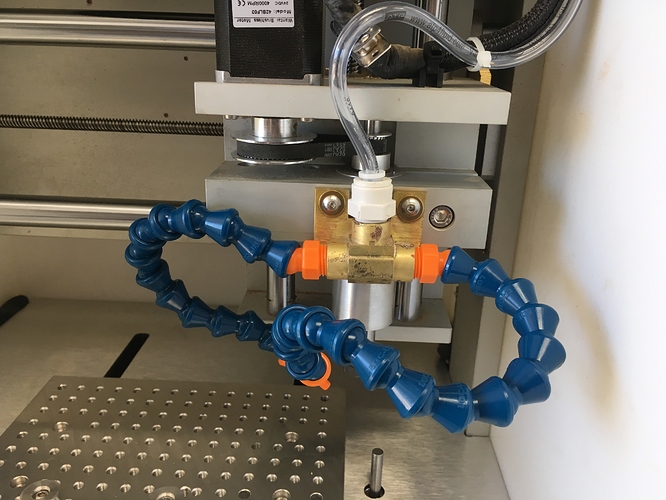 Carbide 3D just posted a chart which should have information on this:

@nick
Hardness is relative and in general you can get chatter in anything depending on the weak point in your system. If you take a deep enough plunge and feed fast enough in something like maple you will get chatter. But maple is going to be vastly softer than any grade of aluminium.

Not sure what you mean by cutting the aluminium with a knife. Ran a quick test of it just now to see though. The 6061 I had to use much more force and the knife wanted to skip. The 5052 I could cut deeper and was a much smoother cut. Wouldn’t want to rely on this as a method for testing though. Pics attached for reference anyway. 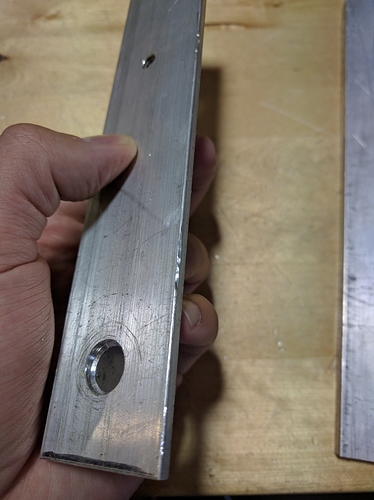 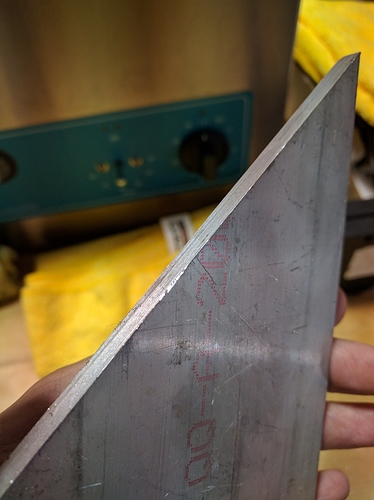 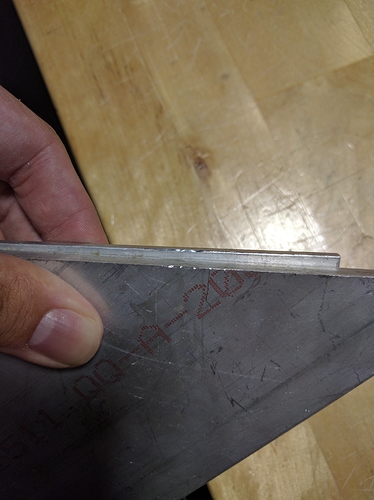 (sorry for the bad pics. Just did it real quick on my phone.)

@mikep
As long as you’re clearing the chips you should be good. I’m wondering though if the cut starts to degrade at the bottom because your air can’t clear it that deep. The corner of your cut looks a lot like a soft grade with chips getting recut.

@WillAdams
Glad they have something. Keep in mind though, this is a feed guide for those tools, with a 611 (or close by RPM), on a Shapeoko 3. Not sure what tools Mike is using, he’s on a Nomad, and can only hit 10k RPM.

Not trying to be a downer Will. I love how much time you spend helping everyone and all the good information you give out. Just want to make sure people understand that chart in context relative to their setup. 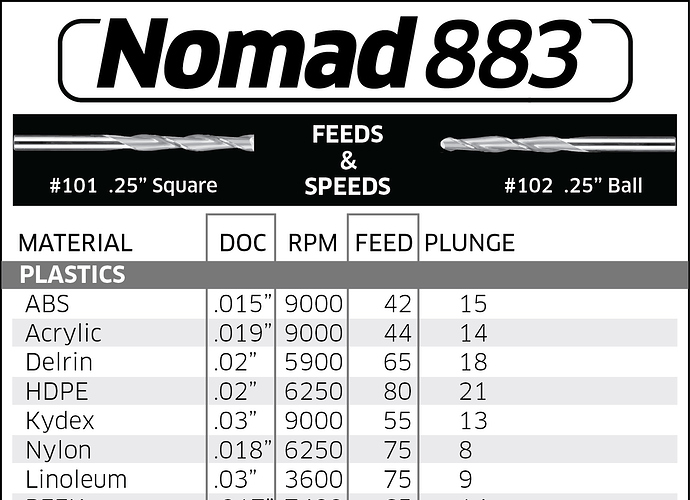 Fair enough, I see your point!

hmm… interesting, I based that idea on when I use a deburing tool on aluminium, I always found it easiest to debur 6082 (equivalent to 6061 here in the UK) than any other grades of ali I used!

Just tried it with a knife myself and you’re right, it behaves completely differently to the deburing tool! my bad!

For reference this was my result milling aluminium on the Shapeoko 3:

Ouch… that feed chart has a 0.0008 total chip load in 6061. That’s definitely going to be in rubbing territory. If that’s required due to the spindle HP you’d probably be better off either reducing the plunge or switching to a smaller diameter cutter. However, considering the feeds Mike has been running at I wonder if feeds this low are really required.

@nick
After reading back through my response I think I came off a little harsh. Sorry Nick, was not intended that way just trying to pass on information.

Yeah, I think the reason it’s so much easier to deburr is that it’s so hard. I know with the softer grades our deburring tools want to bite much more which makes it hard to get a smooth even deburr.

@TDA no problem, I thought it might be a useful technique without trying it myself, I was wrong

no hard feelings! I think that is the case, the deburing tool is very hard so it carves through aluminium like butter but you can feel the difference between certain grades. It may not give an accurate representation of hardness though which is odd…