Different amount of nodes from file to file

Hey everyone. I’ve been getting some pretty bad tear out recently while contour cutting maple. I’ve gone over all of the usual mechanical culprits, however. As I was rechecking my files, I noticed massive differences in the amount of nodes from file to file when clicking the edit node button. I’ll attach pics, but does anyone know why this would be happening? 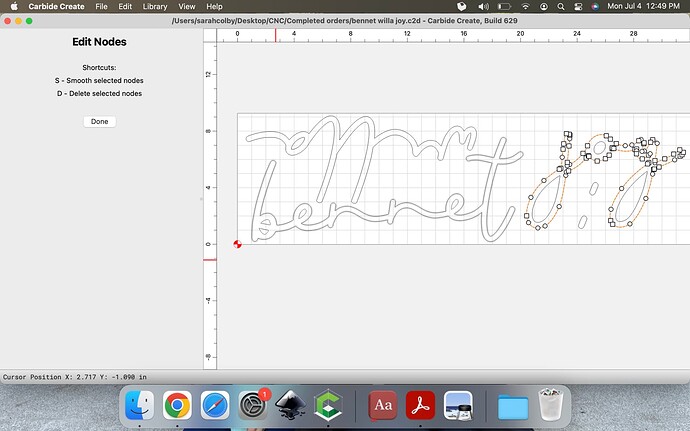 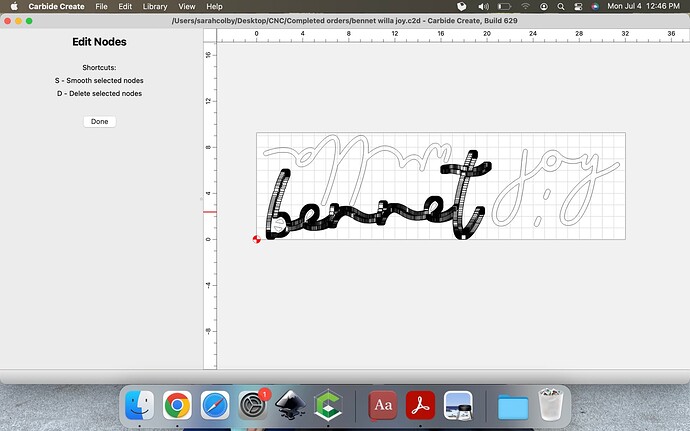 Both jpegs converted to svg

Boolean Operations convert Curves into polylines. Use the Trim Vectors tool or export and use a 3rd party tool.

Sorry I don’t think I was clear on my question (my wife designs the files and I’m on the machine) so we use convertio to convert a name file from a JPG to an SVG, then we upload the file into carbide create. It seems like some uploads have more nodes than others. Would having less nodes affect how smoothly it cuts?

Carbide Create should import the nodes which are in the file.

Having more shouldn’t be an issue — the machine eventually has to move in straight lines.

It’s easy to convert a curve to a polyline to check, but it’s more likely to be the tool or feeds and speeds or the material.

I tend to agree with the f&s and material thinking (as my knowledge of design carbide create is extremely limited) I was only thinking, do more nodes create a smoother curve compared to the files where the nodes are fewer and spaced further apart. Or does that no matter at all really. Side note. We use CC build 629. Is there an update we should be doing? We just kind of stick to what we’re comfortable with as we’re fairly new to all of this. Thanks so much for the help

Check your F&S but maple has a split personality. Some of the grain is smooth and linear while other parts have will grain that runs in every direction. Most wood when the cutter is moving cross grain will have some fuzz around the edge of the cut. If possible use downcut bits. Some bits like Vee bits are not up or down simply straight cutting. But if using end mills try downcut to help with tearout. Upcut bits like the #201 leave a lot of fuzz no matter how good the wood grain is because of the nature of upcut bits.

Thanks for jumping guy! 100% agree with the Downcut bit. I only use Freud & whiteside Downcut. Most the time it works well. However, when the tear out happens, it’s always on the same sections of my files (which is why I wanted to investigate the design part as well). Although lord knows there’s enough variables with the machine as well. But the tear out occurs on the curved tops or bottoms of the letters. I’ll try to show a few pics so you get the idea 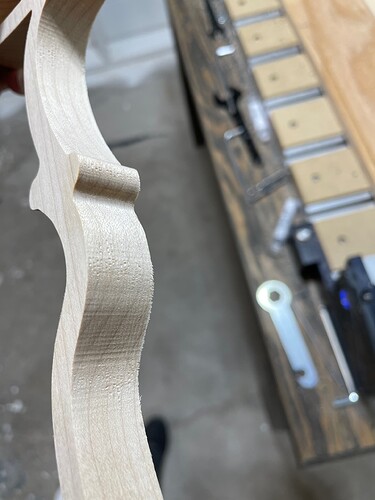 Have you tried leaving a roughing clearance and taking a finishing pass?

For the finishing pass, try a tool w/ a higher flute count, HSS if that’s an option.

In the picture where the curve looks rough looks a lot like you are cutting from straight face grain and basically you are exposing end grain. Even though it is not like a 90 degree cut going on face grain and turning across and getting the classic end grain revealed. As you are cutting on the curve you are exposing end grain. Endgrain is always a rougher cut. Maybe someone can recommend a change in cutting parameters but you may just have get the sand paper out to smooth out the rough spots.

The grain is running parallel with the main part of the object but when you cut the curved part the fibers of the maple are being cut at a bias exposing end grain but only at an angle and not at a full 90 degrees to the long fibers of the maple.