DO NOT leave your CNC unattended

This not my video. I just stumbled onto it. This is not a fault in the Shapeoko. This was the result of not keeping an eye on your machine while it is in operation. From the description he struck one of his holddowns which ended up causing all this mayhem.

Wow…I hate it when that happens, but it could have been sooo much worse…Imagine if that was aluminum instead of wood…
Gotta give the guy props for getting the warning out and not hiding this…

Speaking of fire, here’s something I wonder about. How safe, really, are the cyclone dust collectors? It seems that if you suck up some really hot chips (probably metal being worse), it could sit and smolder for hours in the bag of sawdust and finally ignite after you’ve gone to bed. This video makes me worry even more about that possibility.

Always safely dispose of combustibles (and recycle metals if possible).

Note: Be careful to recycle or safely dispose of milling debris and dust, keeping in mind flammability, (potential) spontaneous combustion, and chemical considerations. Even natural materials can have surprising implications for disposing of them, e.g., walnut wood dust is aleopathic (inhibits plant growth) and an irritant to the skin and breathing tract and potentially poisonous to some animals in addition to the typical spontaneous combustion hazard which sawdust poses.

If you are inexperienced/novice/newbie, sure, but I’ve been in this game for more than 4 decades, and as such, my machine runs unattended ALL the time.

PS My shop ALSO has a sprinkler system.

PS that’s an old video and has been on this forum before. (Feel free to search for it)

I put four cups of water in my Dust Deputy as soon as I empty it-or as it dries out. The soup makes pouring out the junk into a ziplock bag much less of a mess than dumping dry dust -Leave the Zip lock open on the shelf until it dries, zip it closed and into the trash it goes!

I’ve been doing stuff for decades, too. But I don’t trust the robot bastards to be left alone. They’ll get sentient on you and club you in the back of the head at the top of the stairs when you go up to check why the noise is different.

I was wondering about a water column of some type in the vacuum stream @YoMan… do you simply catch your Dust Deputy particle matter fallout into a water bath?

p.s. Sorry to go off-topic and to the OP, yes this video has made the rounds here previously.

Exactly…1" of water in the bottom of the catch bucket.

This is one thing I like about my 3d printer, hit print, walk away, you may not come back to a successful print but you’re unlikely to come back to a house fire. My shapeoko running is a good time to clean my shop or watch youtube but never go too far.

Id like to set mine on fire at times lol,

I didn’t mean to imply they don’t simply that I’m overall more confident something catastrophic won’t happen. I wouldn’t run either machine if no one was in the house, I don’t run the cnc unless someone is in the room.

IT joke. If I were in a locked room with Hitler, Bin Laden and a printer and I only had two bullets, I’d shoot the printer twice.

Happened to me this evening (though nowhere near this severe). A final pass to cut-out the perimeter of a clock face, and I just couldn’t understand why the g-code was screwing up on the depth of pass with a .25" bit - it was sloping the cut -down- into the grain, then -up- away from the grain… and then the router plunged. Right through the material (and into my wasteboard), jamming the end-mill hard against the aluminum T-Track… I was sat right by the machine, but still wasn’t quick enough to save either the end mill or my T-track. Fortunately no other harm done (apart from adding further to my growing firewood pile!)

It wasn’t the G-code - it was an Id10T error on my part - In my haste to complete the final 2 minutes of the job, I hadn’t fully tightened the collet, so the end mill was ‘floating’ on the material. That’s to say: right up until the moment that it wasn’t.

To the OP’s point - I’m not sure I’ll ever be ‘confident enough’ to leave ~any~ power tool running in my shop unattended - that’s asking for more trouble than my pay grade can afford.

I’ve ruined enough parts runs due to inadequately clamped collets & bits… now I obsessively tighten everything. I was thinking of extending my stock Dewalt wrench for more tightening torque, 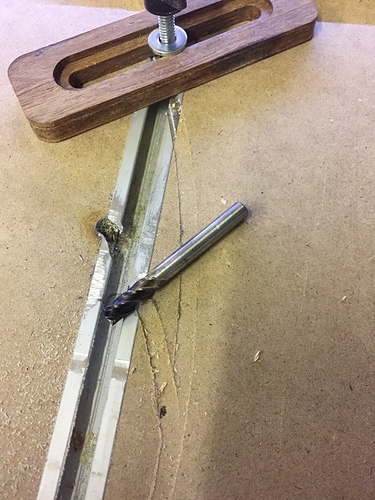 …Not the first scalp I’ve taken, as you can see

I’m always worried I’ll damage the shapeoko applying too much torque. I hold the route but some of that twisting has to transfer. Ideally I’d remove the router and change it but that’s really annoying with the z axis limit plate in the way.

Generally speaking anything that has moving parts, electricity, and that level of energy can catch fire. I’m even a bit phobic about leaving things “turned on” when I’m not around, and often flip the mains if I’m going to be out of the office for more than a day or two.

I’ve also had problems with flooding, years ago I was at work and my mom called “the house is flooded” a toilet hose burst and filled the house with about 2" of water. Thankfully it was a stick-built concrete slab house, so no serious damage was done, but we had to rip out all the floors, and there were dehydrators running in the house for about 3 weeks. So these days if I’m out of town for any extended period of time (more than a day) I also turn the water-heater off and kill the water service to the house.

One thing that hasn’t made me excessively happy about the shapeoko is it’s lack of an emergency stop button. I mean a large physical button located on the front of the machine somewhere. I did wire the power strip up to such a button, which completely kills the machine (router and control). I kinda wish the SO3 had a “fail safe” mode, as it is, if you pause, it just stops the spindle where it is, and if you hit cancel it goes into a homing cycle. If you’re trying to extricate some mangled mess out of the machine, generally the best route is to kill the power, which can totally interrupt your workflow, but it’s easier than the alternative.

Stay safe out there…