Put up a survey 'cause I was curious:

and will put the results up at:

As noted there there are a couple of options for CAM in OpenSCAD:

It’s that last which we will examine here, working up a basic test file for an endmill geometry which is not supported by Carbide Create, a tapered ball endmill:

The BlockSCAD version is available at:

and the OpenSCAD code may be easily exported from it.

As has been discussed in the past, the first thing to do is to move the variables to the top of the file so that they will work with the Customizer: 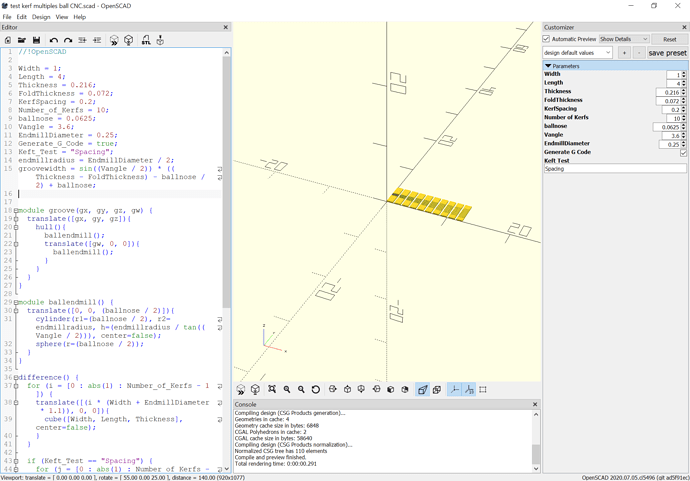 and then updating them to reflect the metric default in OpenCAD.

One notable consideration here was avoiding the use of transform() so as to ensure that the cuts in question would all be done in the same coordinate space when written out as G-Code: 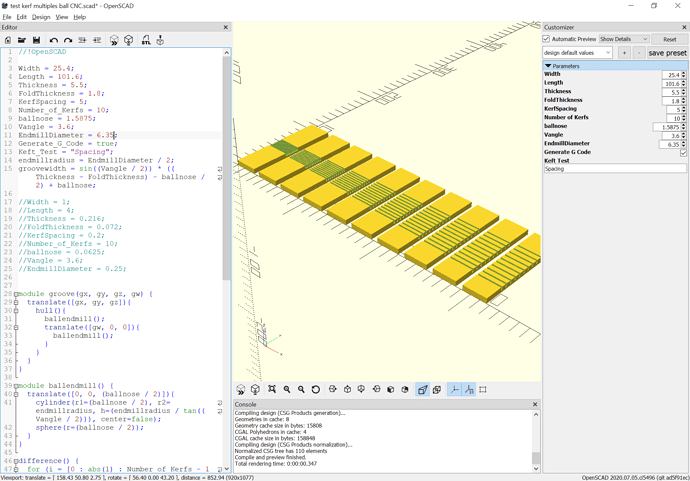 the module used for the cutting has as arguments the begin/end points, so it is a simple matter of writing them out suitably.

First, add a section for the CAM settings (moving appropriate variables there and adding those necessary):

Then we add the appropriate commands to export the G-Code:

which results in the G-Code being written out to the Console:

We do need to work out adding a suitable preamble and postamble.

The commands needed for the preamble are roughly:

which indicate that we need to go back and add a few more variables:

and simply add the suitable commands after the variable declarations:

Similarly, we add the postamble at the end of the file:

For anyone curious, the file is here:

Copying the console text and editing it appropriately gets one a file which previews as expected: 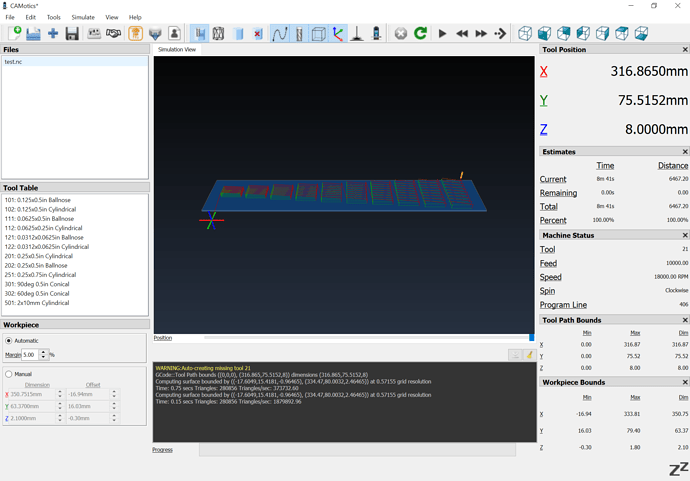 One concern is the cutting is done at full depth, and the test parts are not being cut out, but the former is easily addressed with a suitable loop, and the latter by modifying the file so that a DXF may be exported, or doing the geometry to move the endmill around the parts as necessary.

To make multiple passes it’s a simple matter of variables to support it and the necessary calculations:

and adding a loop:

(while we’re at it we’ll experiment with ramped cuts)

Test cut worked, but is a reminder grain direction matters even in plywood: 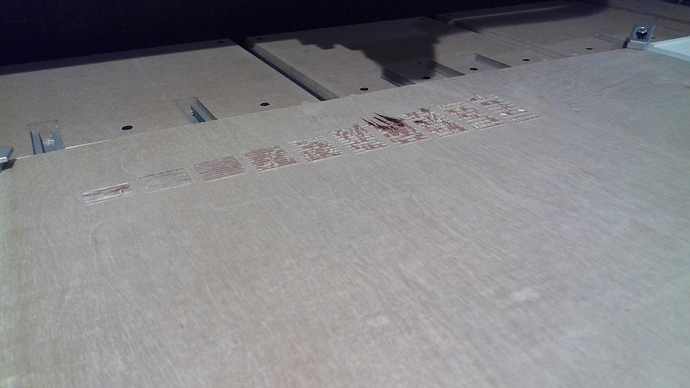 (and apparently the top layer is ~0.18mm thick — should be able to do something w/ that)

Next up is cutting the parts out with a file exported from OpenSCAD and for which CAM was done in Carbide Create and should be in register.

This is interesting but I have to ask: why? It seems to me the main motivation here would have to be manually controlling your toolpaths in a way that other CAM tools don’t allow. Do you have plans for a custom machining strategy that doesn’t exist in Fusion 360 or something like that?

Unfortunately, the actual cutting didn’t work out as well as the toolpaths: 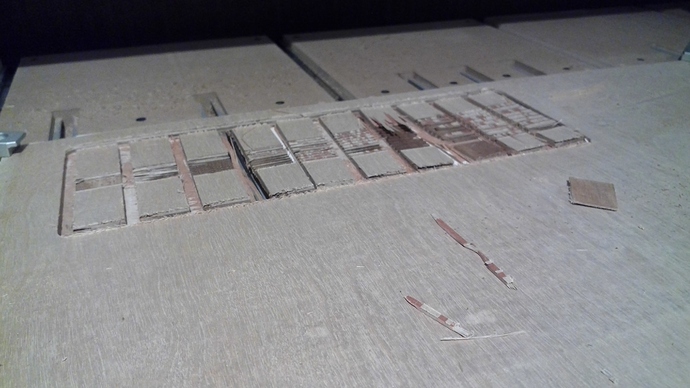 On to another test.

Hmm, is it not possible to set up arbitrary mills in Fusion as form mills?

Not here to challenge you or anything, just wondering if there’s another way if I run into this myself one day.

No interest in using Autodesk stuff — my liver wouldn’t be able to take the drinking I’d have to do to put up with them again.

I’ve been considering OnShape, but still leary of them given the bait and switch of their free license change.

I’d rather just do it all in open source — once I’ve got a complete workflow I’ll investigate other tools, some possibilities:

A notable limitation here is that OpenSCAD limits the Console Log to 5,000 lines.