So I just received an LMT Onsrud 57-285 Downcut bit today. It can be referenced here.

Since the default Shapeoko Feeds and Speeds chart isn’t set up for this bit, I’m trying to reference the Onsrud tables from their website to calculate feed. But the formulas from their page don’t make it easy to calculate feeds and speeds because you need to know 2 out of 3 things: Chip load, RPM, or feed rate. Well technically I want to calculate RPM and Feed rate, so this becomes difficult. Their chart for hard woods is: http://www.onsrud.com/files/pdf/2012%20LMT%20Onsrud%20Production%20Cutting%20Tools%20Hard%20Wood.pdf

So I guess the question is which one seems right to you?

Suggest you start w/ the latter and use http://www.precisebits.com/tutorials/calibrating_feeds_n_speeds.htm to dial in the right feed rate.

Thanks Will, for the rapid response, and the fact that you are dependable to be as helpful as usual. I’ve been watching your ongoing feeds and speeds thread, so figured this might be of interest. Any particular reason why some formulas include the cutter diameter and some don’t?

For me it’s depth of cut. Whats a rule for DOC for wood?
I always went half the Dia. in metal for the chiploads, but of course if you change DOC, so does the torque/deflection.
I’ve been using Gwizard at 45% feed speed, and it seems about the max for the XXL.
Here is what I got for your bit (actually generic) in hardwood @ .3" DOC.
I’m curious what you end up with.
This is a chipload of .003 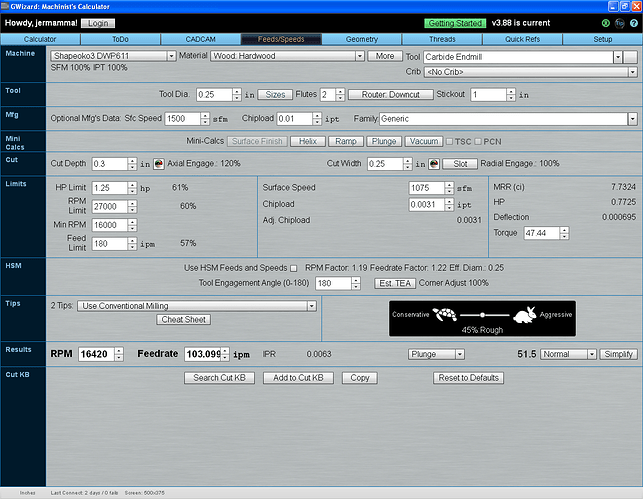 Interesting. That’s in between the two formulas I mentioned originally. It seems like I’m down to the proverbial “do a test run” stage and see how it comes out. I’m making some tool path adjustments now in Fusion 360, so should have some results this evening.

Any particular reason why some formulas include the cutter diameter and some don’t?

I think it’s for Surface speed(length of cut a tooth makes per revolution), or chipload (thickness of cut) per tooth.

For me it’s depth of cut. Whats a rule for DOC for wood?

Finally I chased Will’s link, read, and found my answer.
I figured there was a reason you didn’t answer my question

That’s an awful lot of tool engagement ― test those values, and work up to them gradually, lest you break an endmill.

Well I ran it last night. For bamboo, I ran my Makita at 19000 RPM (3.25 on the dial). I made a contour pass around the outside of my model and cut a hole in the middle using the old reliable #201 standard flat endmill, but left about 0.1" as the “stock to leave” in the Fusion 360 toolpath. Then I came back and did a finishing pass with the Onsrud downcut bit, running it at 48 IPM feed rate. I was getting some decent size chips, so I would guess that you could most likely run it faster than that. Maybe as fast at 70 IPM. I did not try it at 120 IPM or more as some of formulas indicate.

Since I’m new to this process, I don’t think I have an eye for how big a “chip” is too big, indicating that I should slow the feed rate. The router did not seem to bog down at all, at least according to my calibrated ear. Any way I can quantitatively measure if my feed rate is good? Or is it just an “eyes and ears” sort of test?

On the downside, I ruined the piece I was working on (not a huge loss, but annoying). I made the newbie mistake of getting ahead of myself and not re-zeroing after I changed from the #201 flat endmill to the downcut bit. They are different overall lengths. Giving me a different point for Z-actual. Which, before I realized it, left a nice routed groove across the top face of my piece as it moved from one place to another. Oh well, once again learning has occurred.

Any tips on how to easily re-zero for different bit lengths? At least until Carbide releases the touch block…hint hint.

A way to use those pesky Janka values, interesting indeed.

I’ve been planning to get some depth stop rings, but others say they’re annoying and dont work?
Precise bits has them

I just touch off each tool change.
And thanks for the up date