Just wondering but has anyone knocked up a bracket for a Y axis drag chain? I made one up with an angle grinder but you know… cnc… 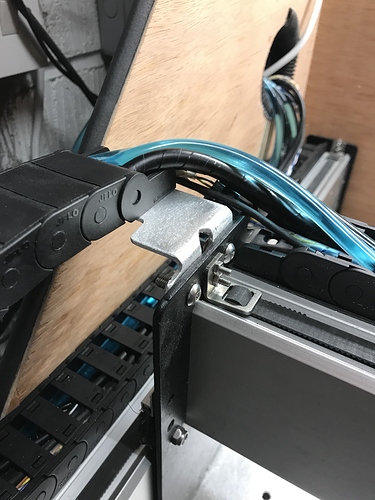 If one doesn’t exist would anyone like me to make a design?

I designed and printed these for my SO3. and they work great. I did change them out for silver ones, and they have been working fine for 2+ years.

Here are the files in a few different formats. I can’t double-check the link because I am at work and Google Drive is blocked.

EDIT: Checked the link with my phone - it works.

Those are really smart, although I can’t use them

I made my enclosure to git the machine + 1cm either side I can only get away with running them slightly over the edge of the Y. As you can just see in the pic it’s tight in there. Unfortunately I don’t have the same X as you.

Cracking design. Out of curiosity, I see you have opening drag chains and you mention your machine is over 2 years old, I take it that was an upgrade you did?

Thanks! Actually, my machine did not come with any drag chain. I did the pre-order (#0054) and ended up waiting ~7-8 months for it to ship. I had a lot of free time on my hands (while laid off) so I sleeved all of the stepper motor wiring in nylon overbraid and designed the brackets and bought the drag chain to get everything nice and neat. I had to slice some of the rubber off the ferrite bead for the SO3 power cable, but I made it fit.

I thought that might be the case. Mine didn’t either and it never dawned on me to install any till a few weeks ago… then the penny dropped.

It’s a terrible slope. . . wanting to make it just a bit tidier.

Also, I misunderstood your statement regarding drag chain. I do not have the opening gate kind like you just linked. I separated the links to bring out the cables and then re-assembled the links. I think I am going to get that chain you linked when I finally get my XXL assembled. Then I will not have to shave down the ferrite bead again.

That was my fault, I was looking at yours then saw my own picture and didn’t recognise it… silly! Thought you had the same type as I linked.

I certainly recommend the opening style. I started off with a closed type and after 30min I was causing a right old mess. Whilst I went through multiple sellers and waiting a couple of weeks. These ones are tops, bought 2m, I used about 1.5m but could have gotten away with 1m. It took me about 2 hours to install and that includes working out how to mount and making a bracket with a drill and angle grinder which in-its-self took almost an hour…

Right I have just knocked up a generic Y axis bracket for all. It’s made from 2mm aluminium, it will fit a 15x30 drag chain, possibly others.

I did the initial design, then made some improvements based around the one I made. I haven’t re-made the new design myself as it won’t benefit me.

Here are some pics, hand made VS milled, and the milled unit painted and fitted. 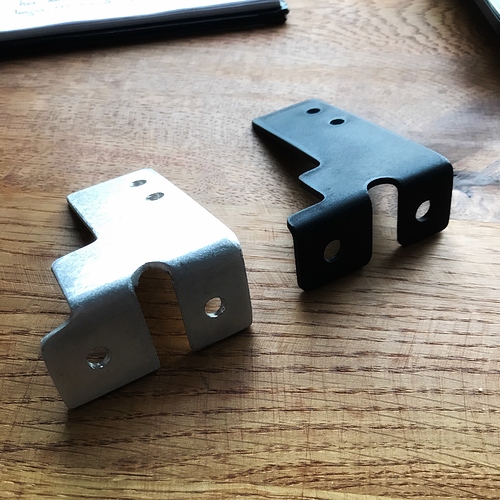 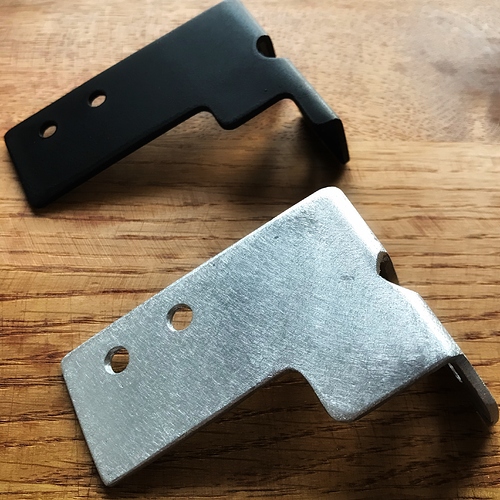 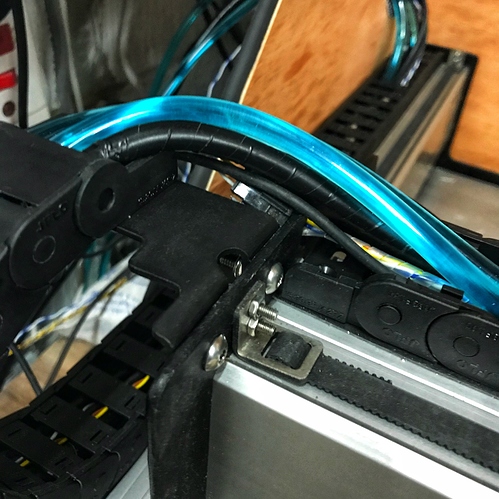 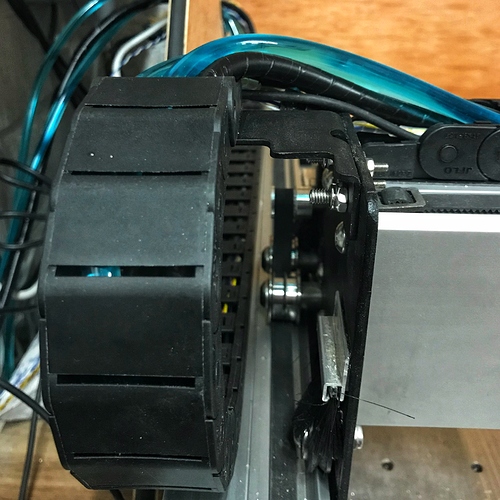 Design file with the improvements below

It should be bent approx 20mm on the right hand side.

Hey a big shout-out to @MadHatter for sharing the drag chain brackets. I made up a set while waiting on a repalcement for my controller board and just got both installed this AM. They fit perfectly: 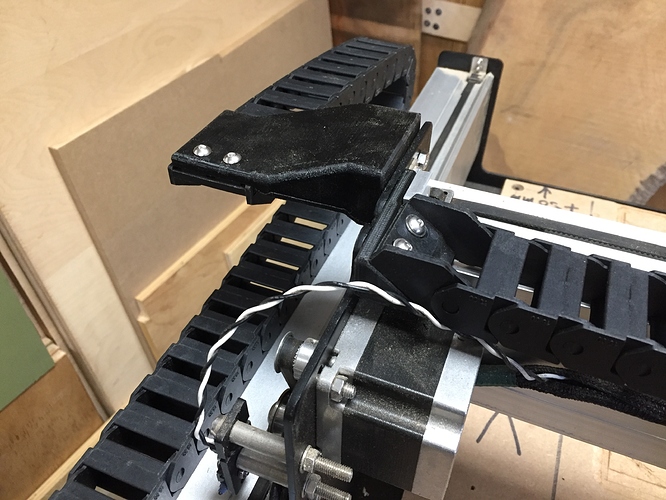 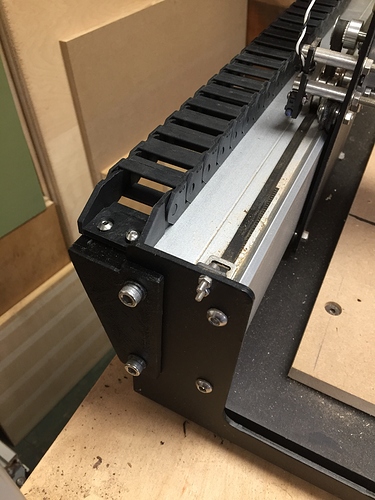 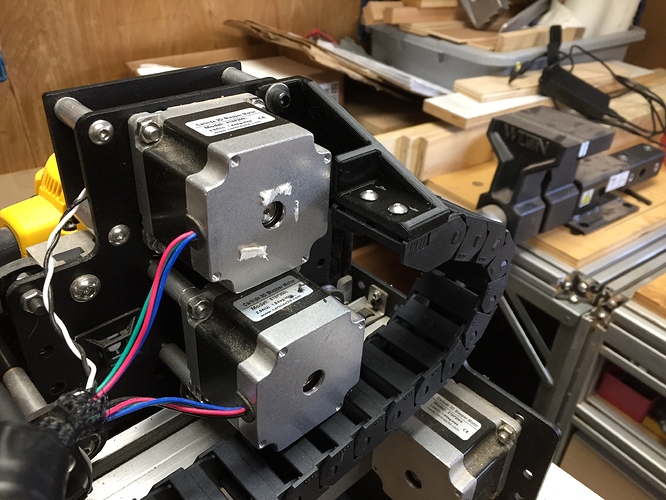 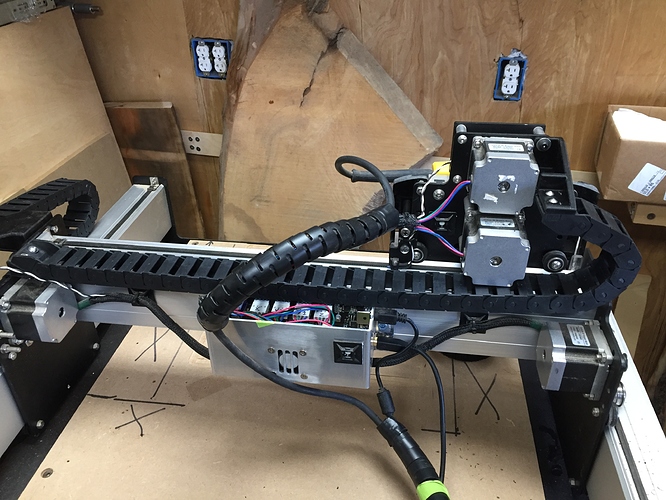 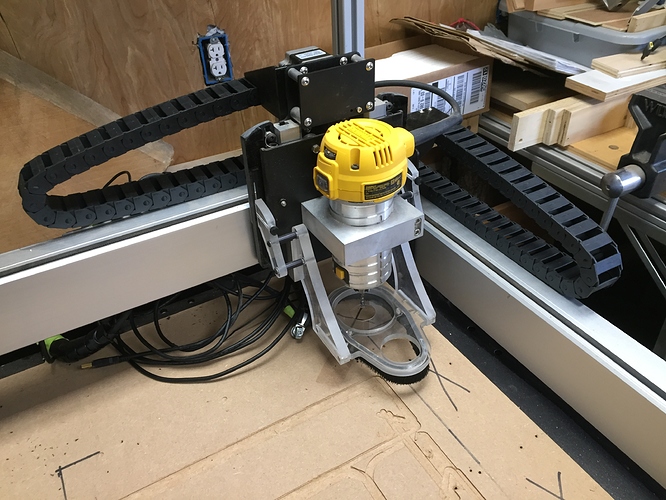 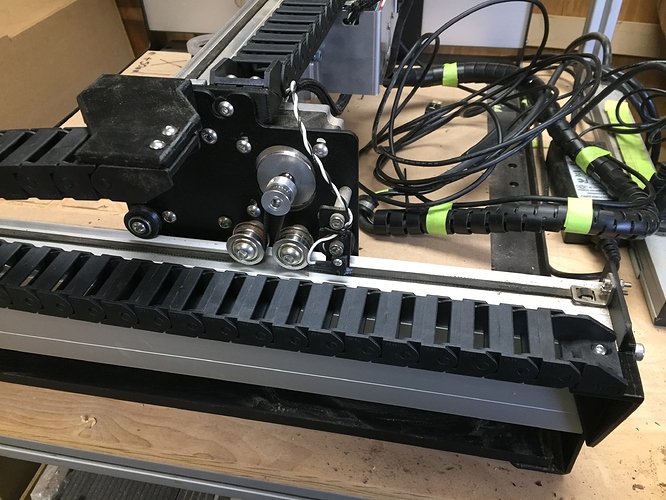 Now it’s time to wire up the Super-PID and reroute the cables. The chain I purchased does not pop open to let me lay the cable in, so I’m trying to figure out how to get the route power cord thru. I was going to retain the plug and wire a socket into the S-PID box, so I’m considering putting some sort of low profile disconnect in at the router end. Would welcome any advice on this.

Richard, glad it worked out for you. For my setup, I diked the power plug off the router and after feeding the cable through the drag chain, I put this plug on it. I put this socket on my SuperPID box (I used this box for my SuperPID, and separated the display from the control board and used these wires to join the display to the control board). I also put a 1/8" headphone extension female plug sticking out and an IEC socket I had so that I can unplug everything from the box and move it around if needed. For funsies, I added 3 lights like this (green, yellow, red) to indicate the status of the setup. I think the green and yellow are 120VAC, and the red is 5V (since I might have tied it to the 5V signal level voltage on the controller board), but it’s been a couple of years since I put it together, so I could be wrong.

Green on means it’s plugged in and has power.
Yellow means the SuperPID power is turned on.
Red means the router is running (or should be running if it is not)

I bought a 3 turn 10K pot to replace the 1 turn pot for more granular speed control, but I have not installed it yet. I’ve only had it for a year, so I guess it’s about time to put it in.

@MadHatter thanks for the details. As usual I over-complicated things, lopping of the router plug is just too simple and easy. I do like the idea of the EMI filter power socket, both parts are on their way. Not sure how I ever did anything before Amazon.

I finished up the wiring as far as I could go. Mickey-moused the router and controller power for now. Had to lengthen the limit switch wiring a bit and then wrapped most everything in split loom. 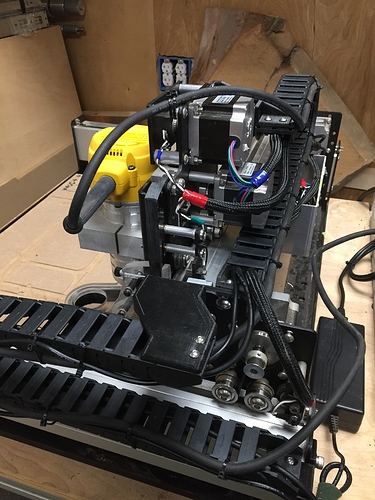 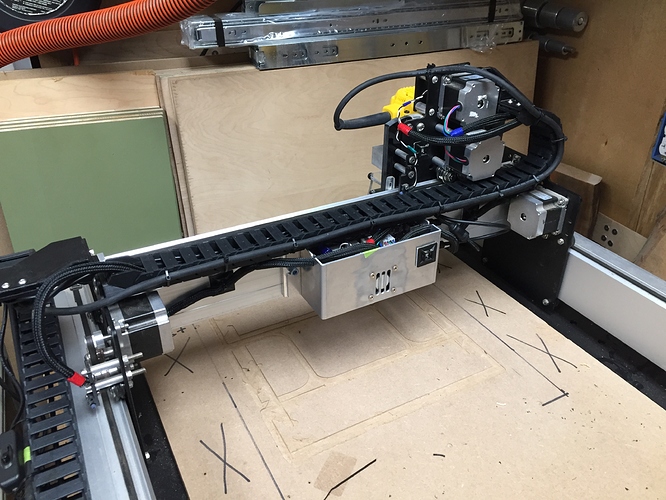 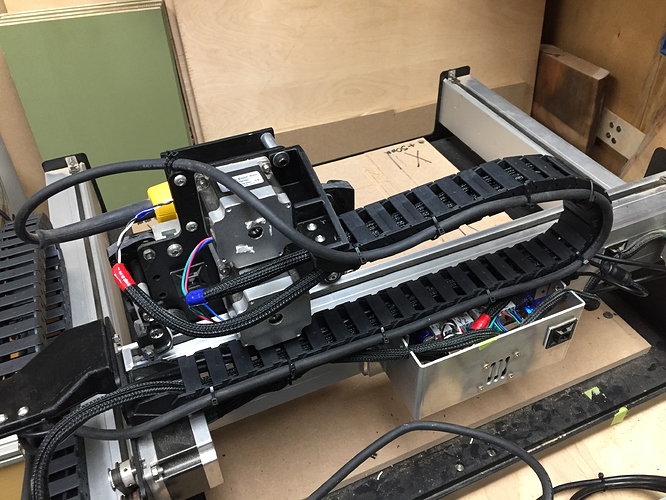 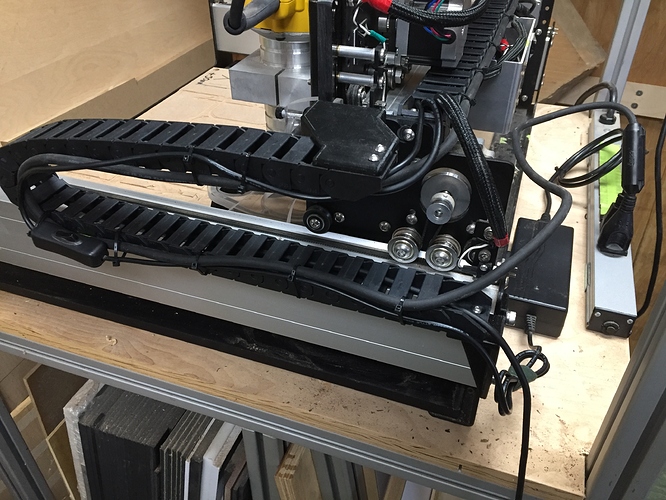 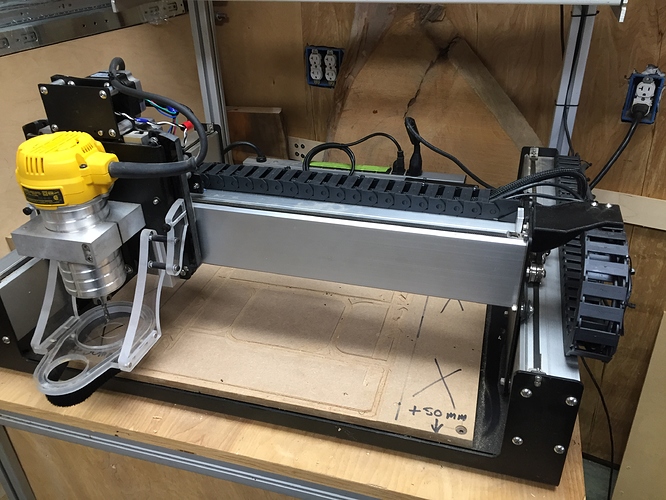 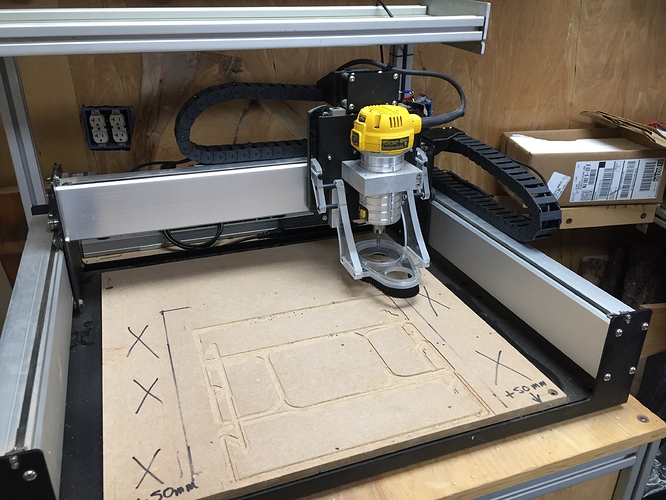 Really works beautifully with the new control board. Fingers crossed that the EMI issue is resolved, I wracked it around a bit turning the router on and off while doing rapids with no issues. I can even turn off the controller power and restart and CM recognizes it, that was never possible before.

Now back to F360 to finish up the table leg design CAM for a live edge table in progress: 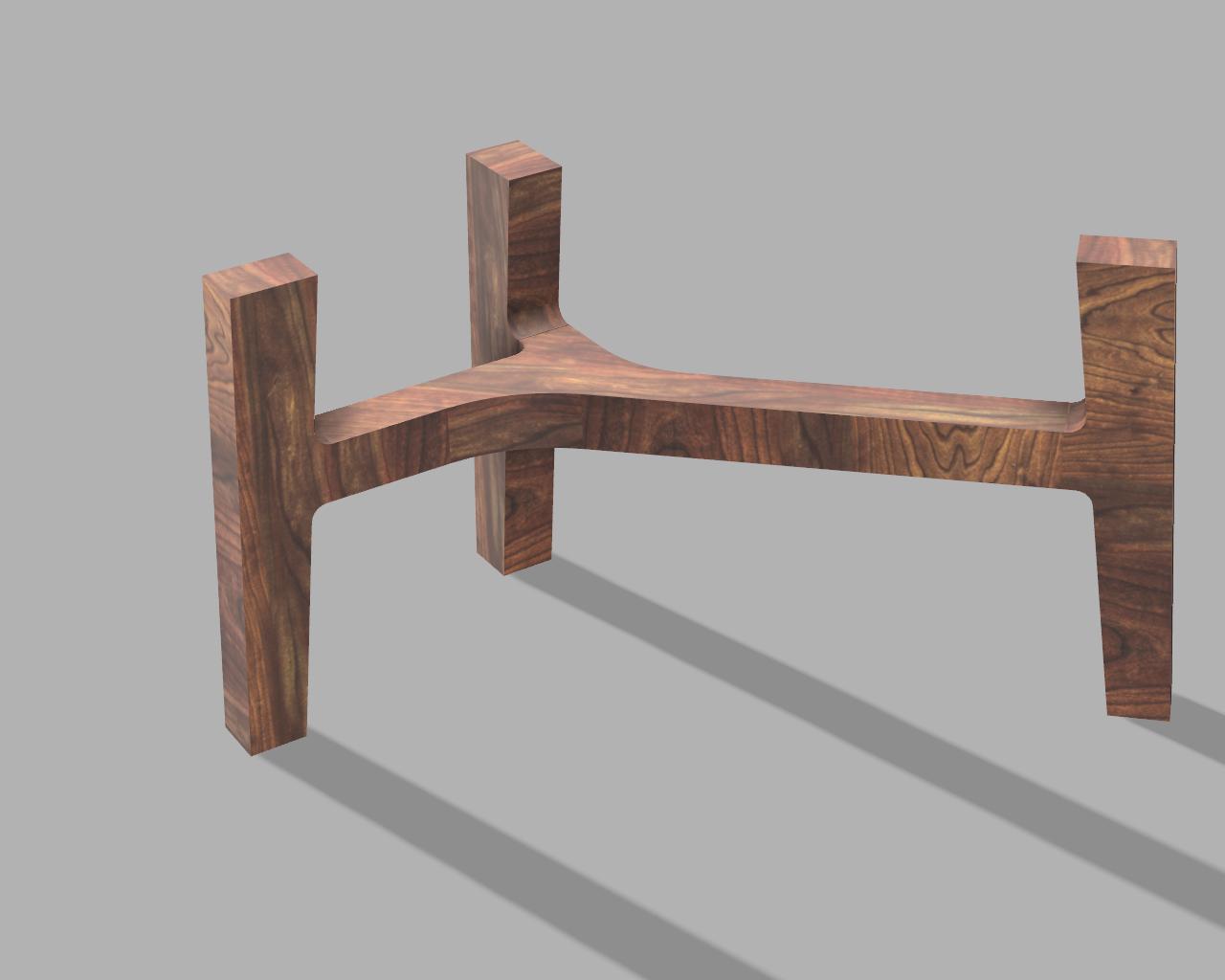 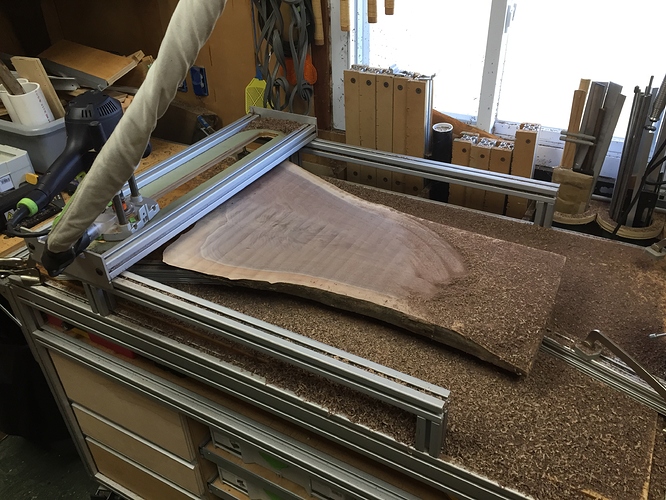 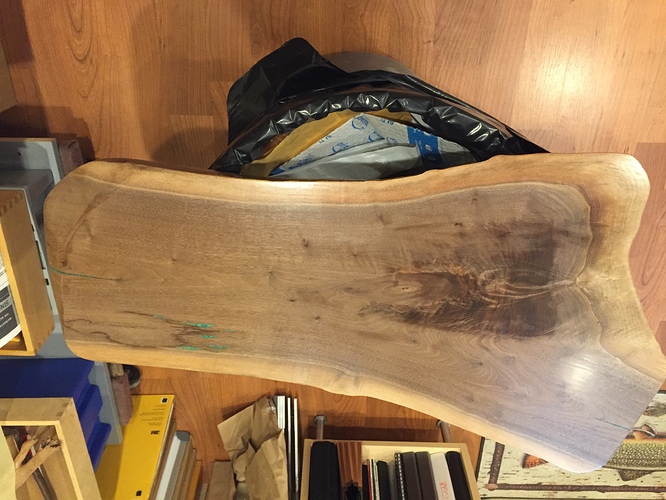 Legs will be 8/4 walnut as is the top. Snowball effect of bricking the old control board has created a month-long interruption. It’ll be good to make some sawdust again.