So im looking at both a festool and Fein dust extracter to hook up to my Shapeoko 3 XXL all the time. Im worried about price im more concerned about noise. I currently have a Rikon 4 inch dust extractor and a Ridged shop vac both are kind noisy as well. Im also concerned with how long the machines can run at a time such as 4 hours, 8 hours, etc. can anyone give me advice or suggestions please? Also to note i will be upgrading my Makita to the 1.5KW water cooled spindle soon.

At a local to tool sale/show I asked a factory rep from Fein about running my older Fein vac for long periods of time on the router and he said it would be no problem. I’ve done runs lounger than two hours with no signs of over heating, etc.

I love my Fein. I run it with a Dust Deputy inline and it barely gets dusty. It’s much quieter than either of the shop vacs I tried also. As far as spindle noise, I use the Dewalt with a SuperPID and can honestly say the spindle is quieter than the material being cut, and the sound of air being moved by the dust boot. I see a bunch of posts about people buying “proper” spindles to get rid of noise, but I really doubt the switch makes it any quieter since the spindle isn’t what’s making much of the noise. The Dewalt isn’t exactly quiet, not what I’m saying at all, but there’s so many other things that make noise it would be the last thing I changed.

Do you have the turbo II with Hepa? or the standard Turbo II?

I have the Turbo 1, no need for the extra volume since most everything goes into a bucket with the dust extractor. 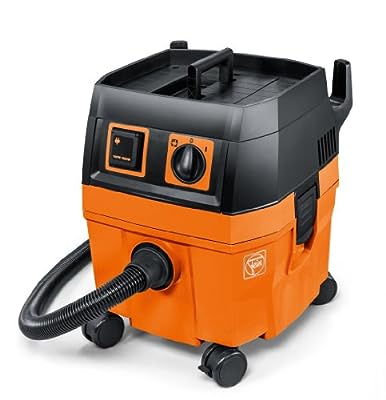 Fein Turbo 1 vacuum with 5.8 gallon tank which includes an Auto-start wet dry vacuum. Powerful 1100 watt by-pass motor is ideal for the job site or DIY use. An integrated power tool socket with automa ...

Plus since it’s smaller it fits on a shelf under my XXL:

That looks good Jude, but no worky with an XXL because of the straps. Although I had found some moulding material at HD to make suitable shims I didn’t really feel like going to HD today as I have plenty of other stuff to do. Then I realized I own a table saw and I’ve got a bunch of MDF laying around, so I grabbed a piece of 3/4" thick and cut my own shims. I decided to just make a bunch of single pieces, then strategically place them under the end plates, see pictures: [image] [image] A…

We run the Festool Midi connected to a dust deputy. Also have the DeWalt with Super PID. We run continuously for 12 hours at times.

With an enclosure, we can hear the chips hitting the ides of the cyclone. We are using the metal original dust deputy on a metal 5 gallon drum.

If you do an internet search, you should be able to find comparisons between the two.

I went with Festool over the Fien primarily because of the HEPA filters, and I already have a lot of Festool.