I run an Oneida Dust Deputy hooked to a Shop Vac and it works well for me. IF its the noise that is getting to you try setting the system outside for a trial run with the hoses brought through a door or window and you’ll find it cuts the noise considerably. IF that works cut holes through the wall to accept the hoses and build a small surround to keep the weather off of the outside system. Even with one of the larger systems you’re going to have a considerable amount of noise and will want that in another room or outside also.

I have found that putting a section of vacuum hose on the exhaust of my shopvac reduces the sound quite a bit.

I have been looking at the different dust collection systems.
I looked at ClearVue (Bill Pentz design) I would get one of these hands down but I don’t have tall enough ceilings , mine are about 80" to the drop ceiling and 87" to the bottom of the joists. Noise is also an issue as many of these are 80db or higher.

I also looked at other systems as well but again they all seem to require a tall basement or they do not have the really fine particle HEPA filtering. Jet seems to filter to 5 microns, Gorilla 2 microns. After reading Bill Pentz’s story and information it seems filtration to .5 microns is a requirement especially for someone like me.

I did come across this product in my searches, does anyone here have experience with this system ?
It seems to have all the features I am looking for including HEPA filtration. and it will fit in my basement, the only issue I see is it would potential require 2 90 degree elbows with about a 4 foot run to get to the enclosure for my Shapeoko then maybe another 3 feet to the Shapeoko’s dust boot. Harvey is dedicated to high quality machines in not only woodworking but other fields too.

My only other idea is getting a Festool CT Midi and two WEN 3410 Air cleaners or one 3417 air cleaner.

I have to try to get this sorted out tonight as I have an electrician finally coming here tomorrow and Tuesday to give me estimates since my current electrical will not support the Shapeoko nor a dust collector or extractor running since my house has old electrical where one circuit feeds half the house on 1 15AMP breaker. Really wish Shapeoko would have stated prior to purchase that the router and the rest of the unit need to be on two separate dedicated circuits.

I’ve been lusting for the Harvey setup (and a bunch of their power tools, esp. the one of their bandsaws) for a long while now — it gets very, very good reviews, and John Economaki (who sold his company, Bridge City Tool Works to Harvey Woodoworking) speaks highly of it in his blog:

(ob. discl., I bought a Chopstick Master v2, a small rule, a small square, the commemorative block plane, and the current brace, and am still trying to justify getting a DJ-3 and the extension for it)

I realized one major issue though after posting… How to get an almost 500lb machine down 20 steps to the basement in one piece… I think I am back to the drawing board unless I can hire some roided out guys at the local gym to carry it down to the basement.

The only other two options I see are the Mini Gorilla or Supercell by Oneida Air but both of them are loud at 80+ db. However much lighter and are not too tall. I honestly would prefer the Harvey but I just don’t see any way of getting it into my basement.

Yeah, same here — only option I can see is building an add-on to the house which includes a basement workshop w/ exterior access designed to allow sheet goods and heavy things in/out — until then, I’ll have to content myself w/ hand tools and smaller, portable tools.

I am not an electrician, but I hadn’t heard of a requirement for running the router and the Shapeoko on separate circuits. I think it is fairly common to have both of them on the same circuit, so they can be wired through a simple emergency stop switch that feeds both devices, like this switch:

Trying to do that with 2 circuits is considerably more complex. A functional e-stop that kills both the Shapeoko and the router is a really important safety feature. Stopping one device but leaving the other running is a recipe for disaster (either lighting material on fire from the router spinning in place, or the Shapeoko making awful noises trying to push a non-spinning router through material).

Running the Shapeoko, router, and dust collection on the same circuit does sound like inviting regular breaker resetting (many vacs pull 10A on their own), so you definitely will need more then a single 15A circuit in the shop.

But like I said, I am not an electrician and I could be wrong about all of this stuff, hopefully someone smarter/more experienced will correct me if I am wrong.

I run my my whole setup off 1 @ 15A 120V breaker. This is with the Makita trim router & a small Shopvac rated at 6.0 peak HP… pretty much crushes my dust collection bin now that I’ve got the lid so tight.
The bigger issue with running a dust collection setup is static charge which will cause disconnects between your CNC & whatever laptop or mini-system you use to control it with. Grounding of the spindle/dustshoe/vac hose is essential.

Yes it’s loud… Which is why I’ve got some rigid insulation around it for dampening. Running an exhaust hose out of the wall of my shed would help even more… But then I would be cold.
But the insulation helps quite a bit & means the spindle/cutting noise is louder. Ideally I will eventually get some foam panels(or perhaps foam glued to plywood panels) for at least a partial enclosure that absorbs most of the sound & basically keeps all dust contained within. 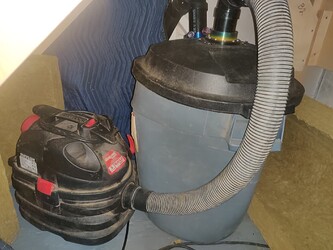 I am not an electrician, but I hadn’t heard of a requirement for running the router and the Shapeoko on separate circuits. I think it is fairly common to have both of them on the same circuit, so they can be wired through a simple emergency stop switch that feeds both devices, like this switch:

I run my my whole setup off 1 @ 15A 120V breaker. This is with the Makita trim router & a small Shopvac rated at 6.0 peak HP… pretty much crushes my dust collection bin now that I’ve got the lid so tight.

Currently the way my house was wired when it was built the outlet in my basement also powers the front bedrooms upstairs plus the front part of the living room. The wiring back then isn’t like it is now so I will need a new circuit.

As far as running a vacuum the Shapeoko the trim router and a vacuum on one outlet its possible but only if those are the only thing on the circuit. Even if the circuit can handle it to me that is a bad idea as both the vacuum and the trim router introduce electrical noise into the line from their motors and from what I have read here and other places that electrical noise feeding back into the circuit can cause disconnection issues with the controller on the Shapeoko resulting in lock ups.

You could build a closet for the dust extractors. Line it with egg crate foam. You do need some ventilation in the summer so motor does not overheat and a place for air to flow out.

So I just finally got some estimates from the electricians. I am still not fully decided on the dust collection

I have looked at Oneida Air and they have the Mini Gorilla, the Supercell and the Cobra. I am wondering if the cobra would have enough CFM as its half the price of the Supercell.
Specs say:
245 Actual [CFM] at 23" WC

Which is higher than a Festool but Lower than the other dust collection systems.

Dewalt also makes a Hepa filter for their shop vacs and has an exhaust port that a hose can be attached to to port the exhaust out of the room. They also have filter bags that can be attached. A simple box enclosure and dust deputy with the exhaust ported out side and you will have a fairly quiet setup. I guess you could even put a secondary Hepa filter on the exhaust with a custom hose mount should you wish to recirculate the air in the shop.

Also a newer dust separator looks interesting but might be a pain to empty.

A simple box enclosure and dust deputy with the exhaust ported out side and you will have a fairly quiet setup. I guess you could even put a secondary Hepa filter on the exhaust with a custom hose mount should you wish to recirculate the air in the shop.

You mentioned earlier you use a Festool for your dust collection. Has that been sufficient enough for dust and chips or does it still leave quite a mess behind on the spoil board ?

I see my options as:

And then ceiling mounting a WEN air filtration unit above the Shapeoko.

The Festool CT Midi has been a game changer for me — I’m usually able to adjust the Sweepy so that I get complete collection, or very close to it — after a cut I’ll vacuum up some stray debris, but there usually isn’t so much as to make that onerous.

After I finish cutting, I usually just leave it running for a bit, counting on the HEPA filter to clear smaller particles out — that said, I only cut materials which aren’t overly worrisome indoors (aluminum, HDPE, Delrin, food-safe hardwoods and pine and so forth) — any cutting of tropical hardwoods is done outside, and really, there don’t seem to be too many particles which escape even a long cut.

That said, I have the Oneida Ultimate Dust Deputy — not sure how the Clearvue compares.

I use the Cobra. Love it.

@Cog I originally had the SuckIt with the Cobra and it worked great…until I dropped my dust boot and it shattered. I just picked up the Sweepy 2.0 and it works great also…although I haven’t mastered the height settings on the Sweepy to be able to route deeper pockets without crushing the brushes and have to start it above the piece and end up with more chips on the surface than I used to get with the SuckIt.

I have a large DC that is 1100CFM and large chips still escape from the brush. Sometimes the bit just shoots the chips out at such speed the dust collector cannot suck it up. All the fine dust gets sucked up and is gone. I have a Jet ceiling mounted dust filter. I only use that when I am sanding. The noise between the dust collector and then add the air filter and then the router screaming is too much even for me. I am deaf in my right ear and have impairment in my left ear from working on the flight line, computer room air conditioning roar, shooting and loud music all my adult life. So even with less than perfect hearing the noise gets to me. I can only imagine what it would be like if I had normal hearing.