I have read the May ’21 topic from Amy Bailey and the reply from Fenrus but am unable to make changes to the text elements of my project’s file. I am using Carbide Create Pro, Build 621 however, my original file was created using an earlier version of Carbide Create.

Like Amy, I have a project containing a Name as a line of text. I would like to rerun the project using a different name. I was hoping that I would be able to do that by editing the existing name by inserting the new letters and then deleting the old and that the associated tool paths would automatically adjust as they do if I move or scale the existing line of text.

When I open the original file, this notice appears, and I don’t know if this may be causing at least a part of my problem: “This file is from an older version of Carbide Create. Text renders differently in Carbide Create V6 than prior versions. Would you like to covert text to paths?” Choices are: Leave as Text or Convert to Paths.

Any help that can be offered will be greatly appreciated and the answer may be as simple as my not understanding the original answer to Amy’s question.

You will need to not convert to paths — if you select “Leave as Text”, then the text object from CC5 should still be a text object and editable when selected in Carbide Create 6. 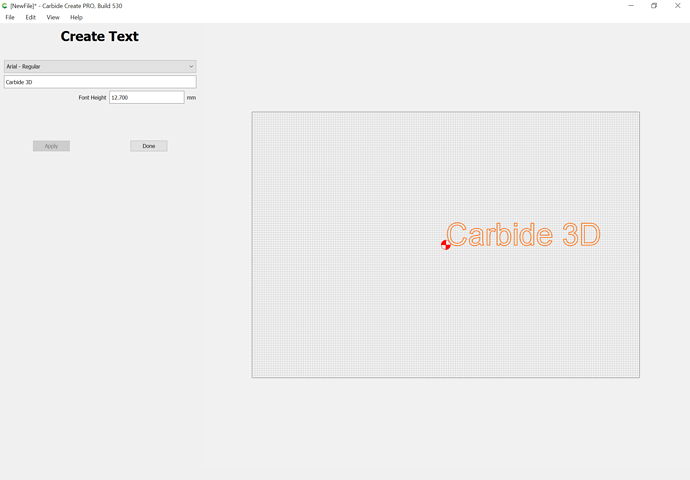 saved to a file and then opened in CC648:

Select “Leave as Text” and select the text object and click on the Text tool: 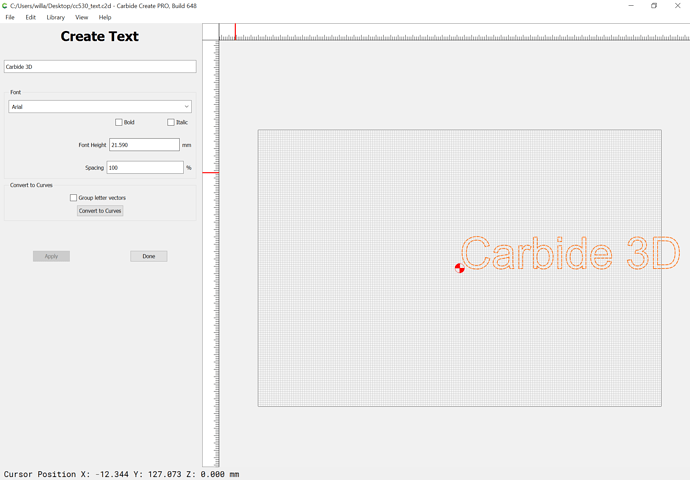 Note that the text will need to be resized to match the original. 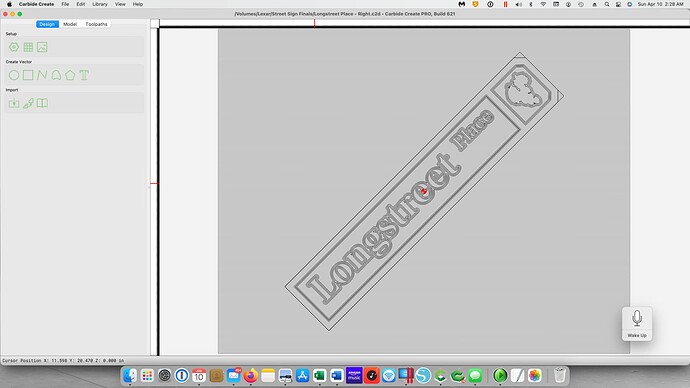 When I use “Leave as Text” the result looks like the screenshot below. 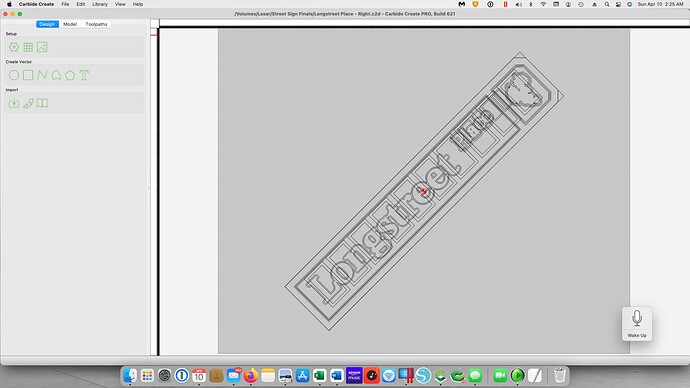 I did not try to use this version as it contained the extra single line boxes in the work which did not look correct. How would I clean up the “Leave as Text” version and then edit the resulting text in Build 621 or later.

As a test, I created a new project in Build 621 where I designed a pocket toolpath around some text and saved that file. I then opened the file and in Design mode, I selected the text and clicked on the text function. The Create Text box opened and I typed my new text in the Create Text box. I left the “Group Letter Vectors” check box empty and clicked “Apply.” The text seemed to be edited as I desired and when I opened the pocket toolpath it appeared to be correct with the revised text. Does this sound as if I am using the correct text editing procedure for Build 631 or later?

Thank you again for your help! I would like to avoid having to go back to starting from scratch in Build 621 as the program is quite lengthy and the existing file, which is a result of a lot of trial and error, works fine.

I’m afraid that you will need to:

If you have any difficulties w/ this, please post it here or send it in to support@carbide3d.com

Here is the version 5 file. I do not believe I have a way to determine what the actual build number of the program I was using.

Thanks for your help,
Tom

Thanks for your reply! Exporting as a SVG file and the associated actions outlined in your last reply may well be above my pay grade.

Can you please comment on the next to last paragraph of my reply to your original message where I described the method one would use to edit the text in a project created in Build 621 of Carbide Create. If I have done that correctly, I believe it may be best to start from scratch using V621 or a later current version. While not my first choice, it may end up being faster and a better final solution.

When I open this, using “Leave as Text” I see what looks like 2 text objects on top of each other 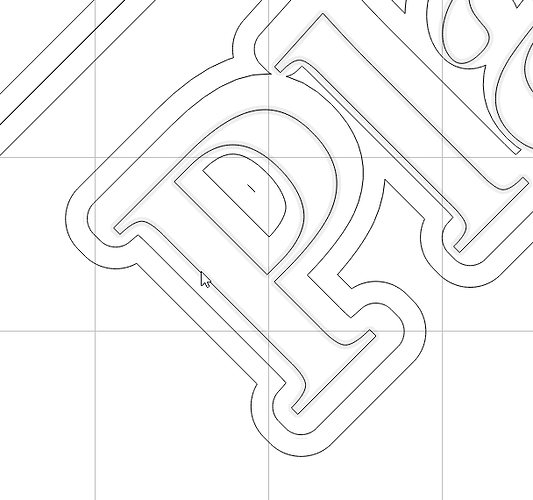 It selects as one big object. So I selected it and “Ungroup Vectors”
The smaller one I have selected is a text object. The larger is just curves. Looks like it was offset?

Now that they are ungrouped, you can select & delete the larger curves, leaving this that is text & can be edited 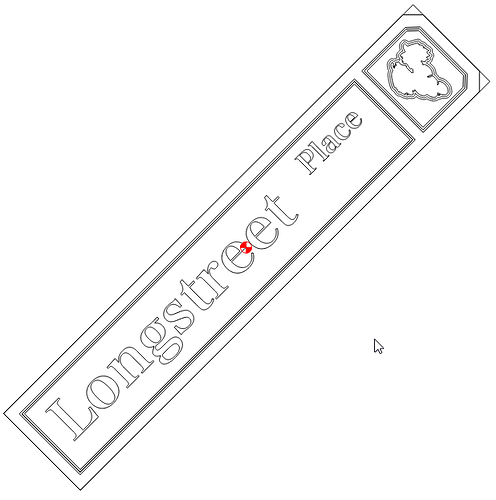 Alternately, you can open the files in both versions, then compare them: 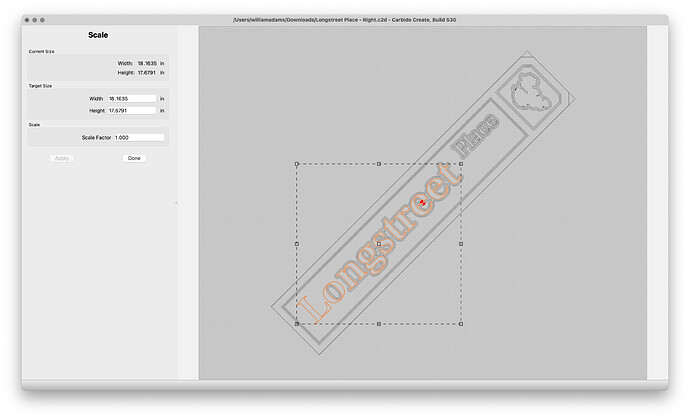 and re-size as need be. 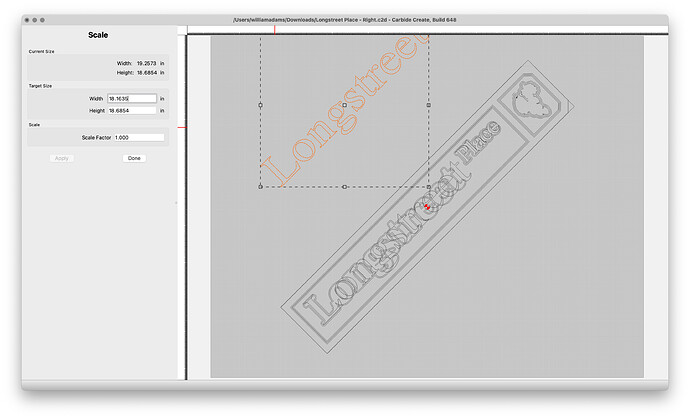 Unfortunately, the text object programming for the two versions doesn’t allow things to line up as one might wish: 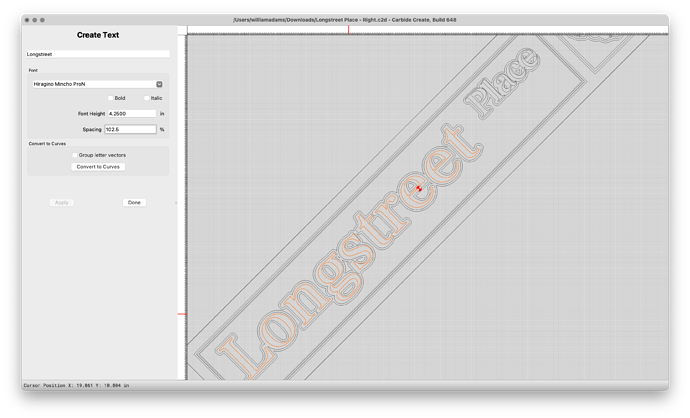 It would be better to just re-set the text and re-create the outlines.

You are correct, the larger curves were indeed an offset. The bottom of the pocket containing the text contains a Texture toolpath. In order to prevent the texture ball bit from marking up the edges of the text, I established the offset to hold the texture away from the text letters leaving them with smooth sides. I believe I need that offset toolpath in the final program and it needs to adjust to the revised text.

This morning I have updated to Carbide Create Pro, Build 648 and if we are unable to edit text from the Build 5 version, I will attempt to rebuild the project from scratch using Build 648. While I hate to do that, If successful, I believe I should then be able to edit the text as I described in my earlier reply to Will.

@WillAdams, Is it possible to get a pre-6 version of CC? I only started recently with a version of 6, and I’ve pretty much updated it with every new release.

@Tom2, Ah OK. The offsets are not associative to the geometry that created them, so if you are changing the text, you would need to delete & recreate the offsets. I was able to get a working & editable text object though.

We don’t have an official mechanism for old versions — don’t you have the old installer in your Downloads folder or a backup of it?

@WillAdams I only came on board in Jan when I ordered my machine.

I recall another topic where something didn’t update correctly from an old .c2d file, and you recommended opening it in the last stable release of 5 (527?), saving it, then opening in 6.

I tried cheating and typing in https://carbide-downloads.website-us-east-1.linodeobjects.com/cc/stable/527/CarbideCreate-527.exe
It worked for V520 though

Aren’t you able to reuse everything except the text? It seems like updating the text with a new line of text is much simpler than redoing all of the other tool paths.

The spacing is not the same between the two versions, so the outlines don’t match.