New Shapeoko 3 user here! Does Carbide Create, or any other program, keep track of tool path linear feet/inches which can then be used to determine the life expectancy of end mills? I realize there are multiple variables to consider such as material of stock and the end mill itself, coatings, etc. Just curious if it’s worth keeping track of or do most people simply gauge the life of their end mills based on the performance of their cut? Having only cut two relatively small pieces with my new machine this is more of a preemptive question prior to stocking my shelves with end mills. How do you guys determine when it’s time to toss your bits?? Thanks in advance!

That’s pretty much impossible with this sort of machine. How to determine if an endmill is done: You need a loupe (cheap, get on amazon) and just look at the tip edges in good light. If you can see the edge, it’s dull. Depending on what you’re doing, it may be fine for a while, but it’s on it’s way out. If it’s chipped, it’s done, just pitch it. The first few times you do this, you’ll probably need to look at a new mill of the same time and alternate between the two. If your finish degrades, you can usually tell (it becomes fairly obvious once you get the hang of it).

Coated (and there are a lot of different coatings) last longer in general, and the type of material you are cutting makes a huge difference (ie. soft wood vs metal), but even more so, how much runout on the mill, and your speeds and feeds make an enormous difference. In my limited experience (I’ve been using a Nomad for about a year), I usually chip the end of a square mill before it actually goes dull, or just plain break one. I suspect I would have more wear issues on a shapeoko where you can use 1/4" mills instead of the 1/8" mills on the nomad. Too fast, too slow (!), both can be a problem for good tool life.

Suggestion: Buy a bunch of cheap mills (if it costs less than $20-$25, it’s cheap) to learn what you are doing, and don’t worry too much about consuming them rapidly…because you will… When you get more comfortable, they start to last a lot longer. It became more worth it to me to use better mills after that.

Agree, except for the suggestion to “pitch” an endmill — if you collect a sufficient quantity of them it may be worth it to have them re-sharpened — if not, HSS can be re-ground into tools / punches and either can be recycled — keep track of which is which for the best rates. Carbide Processors will take them for recycling.

True, I oversimplified. I still haven’t found anyone to take mine that isn’t either multiple hours of my day to get to, or won’t cost me an unreasonable amount to ship to…so they keep piling up. For the quantities I think most of us generate, the recyclers aren’t too interested.

Duly noted - thank you both for your prompt responses!

Another new S3 user here… Taking your advice I started looking around amazon at loupes. Hopefully a simple question, what type of magnification do I need to inspect the end mill correctly? Note that I don’t really even know what I am looking for, so maybe a little stronger magnification will help me see the end mill flaws that jump out at an experienced user at little more clearly.

I believe Carbide Processors will accept used carbide tooling on a weight basis to recycle.

Sure, but then I have to either drive all over the place, or pay for the shipping to get it to them. I don’t think many of us are generating enough scrap carbide to make that cost effective. 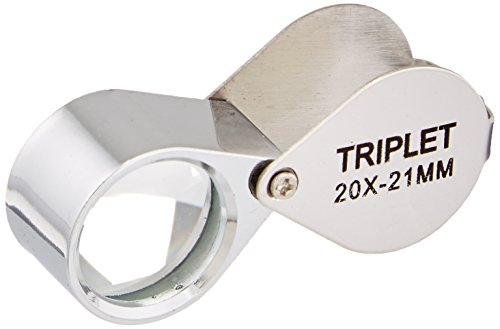 This very practical Folding Jewelers Loop/Magnifying Glass offers 20x magnification. Lightweight and compact ~ easy to carry in pant or shirt pocket, or handbag. In addition to jewelry and watch repai ...

perfect. Thanks! I’ll get one at least 20x then