NERD ALERT. As one my crazier projects, I set out to reproduce a door (and a few other things) from the Expanse Rocinante military spaceship. 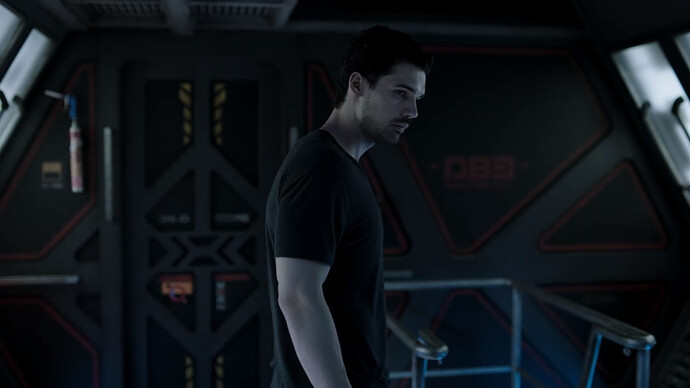 Once I made a model in CAD, I split the design into pieces that could fit on a 24" x 31" panel without putting seams at awkward places. This ended up being a 7 piece machining job on 1/4" MDF. I glued up 3 of the panels to build the lower portion of the door before hanging it. 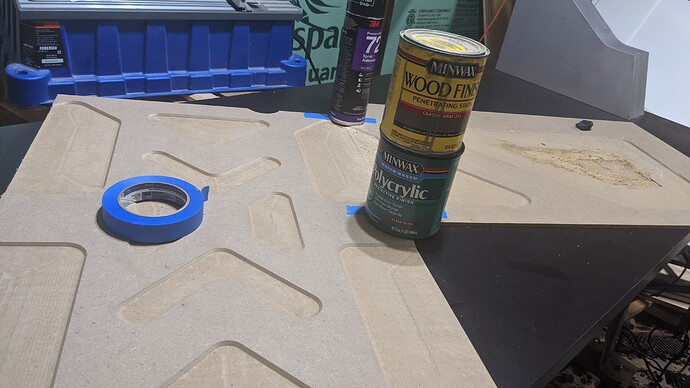 Then I placed the top and the two side filler pieces, and started filling the seams. As posted earlier I had an issue with the bit walking down during this job, so some of the panels were severely scarred. I filled with bondo and epoxy (depending on the area) to recover it. 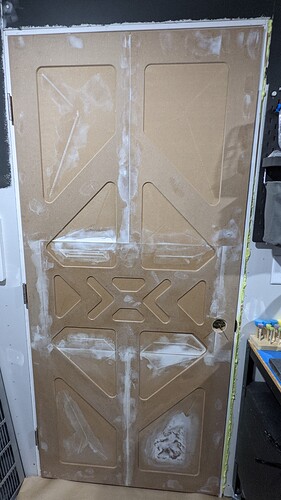 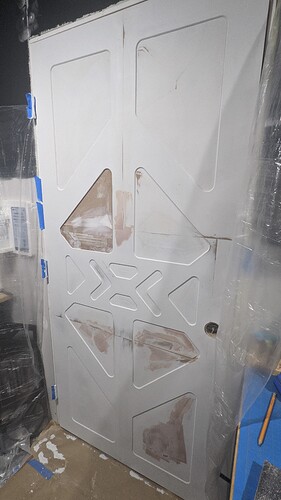 Then it was off to decal land, jointly designed in CAD and Photoshop. I used removeable vinyl (as opposed to permanent) so I could reposition without tearing my paint if I got the placement wrong. 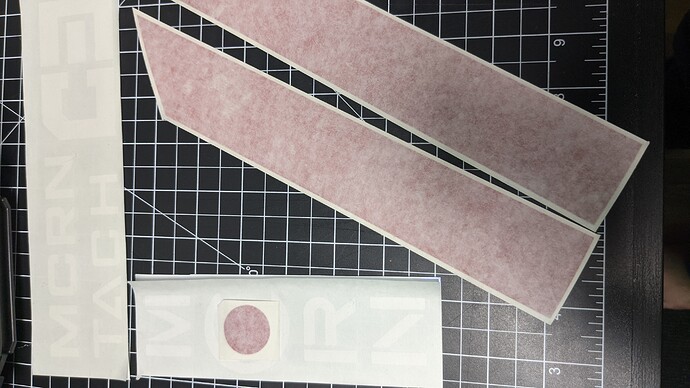 Final build is 36" wide by 80" tall. Two coats of paint and a bunch of decals later and it’s finished! Pretty proud of it. 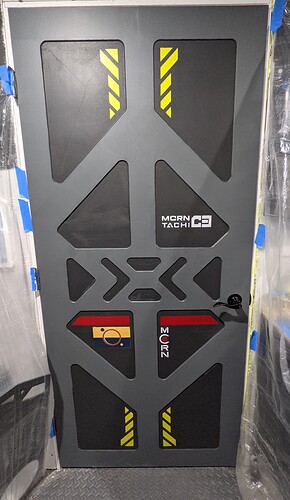 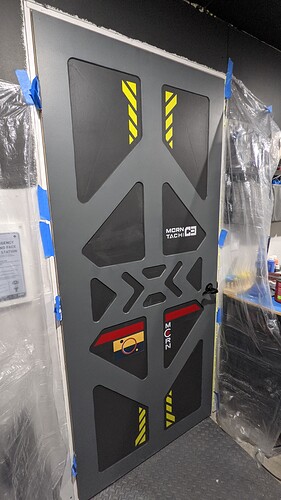 If you’re an Expanse fan, drop me a line and I’ll share the rest of the project with you!

Can you explain how primer helps identify problem areas? Just looking to learn

Catches the light more than the very matte MDF, allowing me to see ridges and edges.

I don’t know anything about the show you’re talking about, but the door looks awesome!

Oh man, if you like space shows with realistic physics and a long, in depth storyline, The Expanse is awesome!

Is this the inside of the door to your man cave, and does the other side look all plain and normal/boring ?

It was a six panel door going into my workshop. Spaceship on the inside so it looks normal unless you’re inside the workshop. Before pic - in the process of converting and finishing the entire room so it’s pretty messy right now. This is the room that also has the Shapeoko. 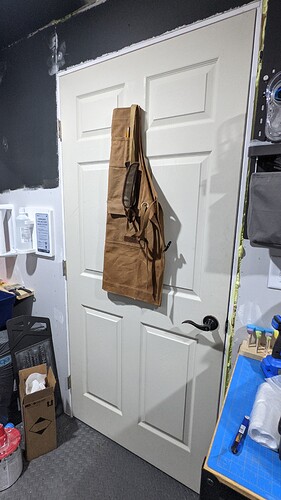 So do you call your Shapeoko the “Rocinante” or “Naomi Nagata”? Great looking project, big fan of the series, it’s really well done.

Well, the WorkShope, of course! There are some Roci and Tachi remnants around though. 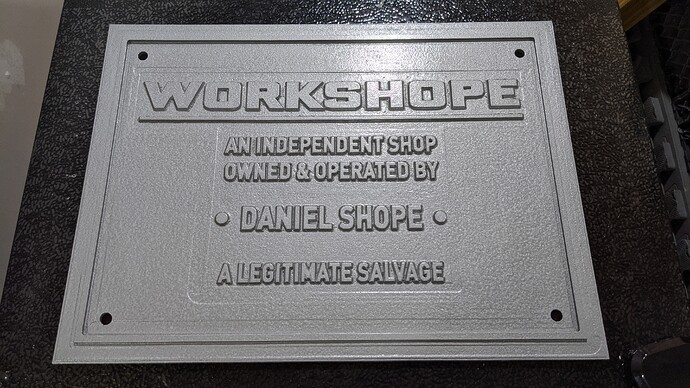 Great theme for a workshop. Now I’ll be honest this is what I’d picture if you said something like, “had some friends over to run a few projects on the Shapeoko last night!” 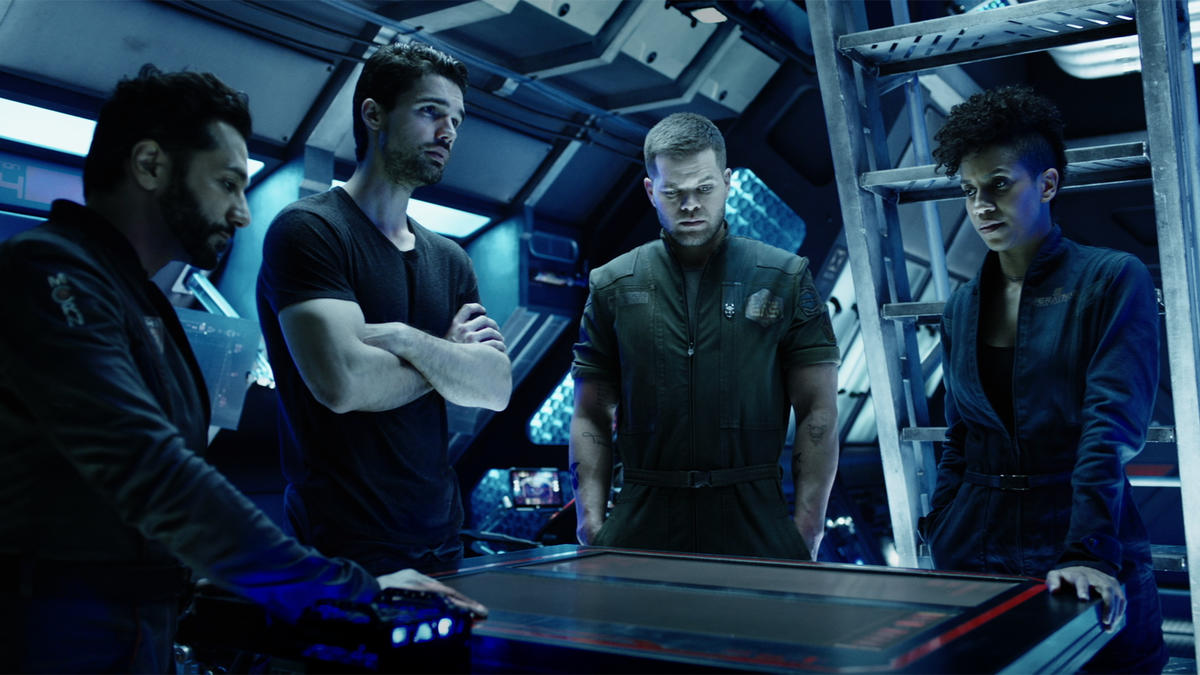 Your “space shop” door looks awesome!
Would love to see more of this project, keep them posting!

FYI: If anyone uses a 3DConnexion mouse for 3D modeling, you can use it to control an MCRN spaceship apparently. 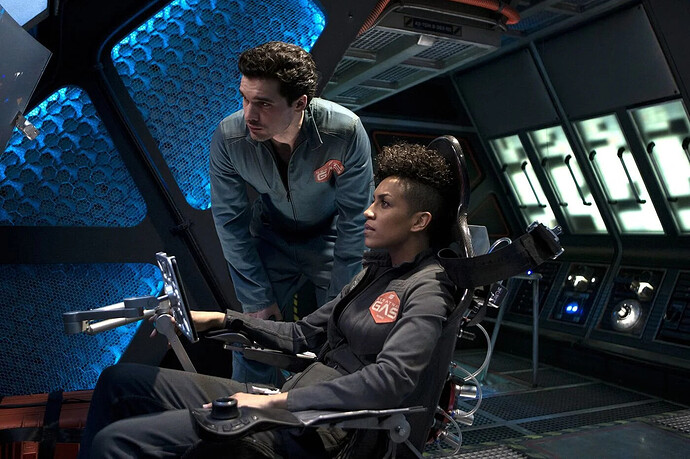 FYI: If anyone uses a 3DConnexion mouse for 3D modeling, you can use it to control an MCRN spaceship apparently.

I have two Spacepilot Pro and they are great efficiency tools, but I admit that they are also awesome with the Descent series of games.

My son got one for Christmas the other year to use w/ Solidworks, and I’ve rather envied that, and really wish that such devices were straight-forward to set up w/ the opensource programs.

Alright, here’s another project for this overall theme - my Shapeoko computer station used to be these black metal shelves with some clean routing on the back. I wanted to bring this in-universe as well, modeled after the Donnager class Bellepheron ship and the Rocinante (both Mars military vessels).

In the new design the keyboard shelf needed to be shallow, so I turned it into a full extension drawer with my SONOS speaker hidden inside. Construction is a bunch of laminated ribs as shown, with some (imperfect) finishing. Got some bondo this week so may be able to touch it up more. 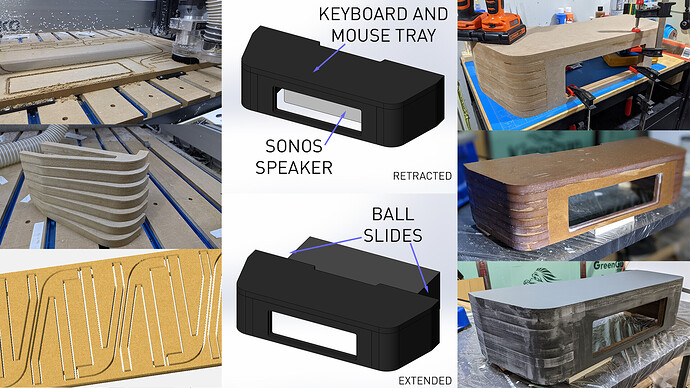 Area still in progress, but here’s the installed station. The wall is now built out 1.5" with a cable raceway inside. The access panel maintains code for the electrical outlet. 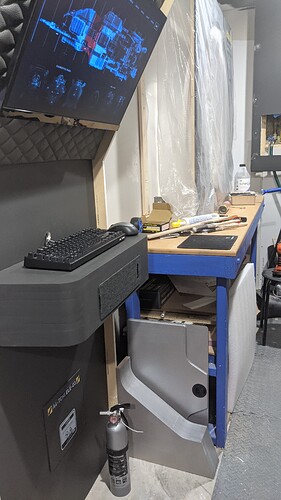 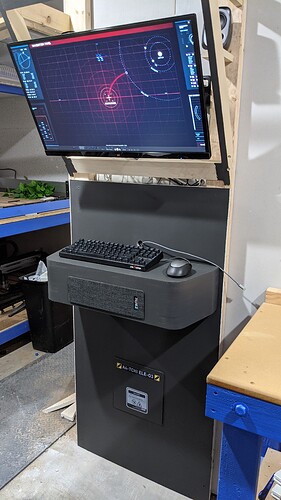 @Hagop92 bonus points if you can guess what the big frame is beside the computer station.

Your project is nerdier than I thought! that looks like great fun to work on… and in soon.

Had to look for that one but @Caffein8ted 's post above helped. The handle looks like the show’s even. 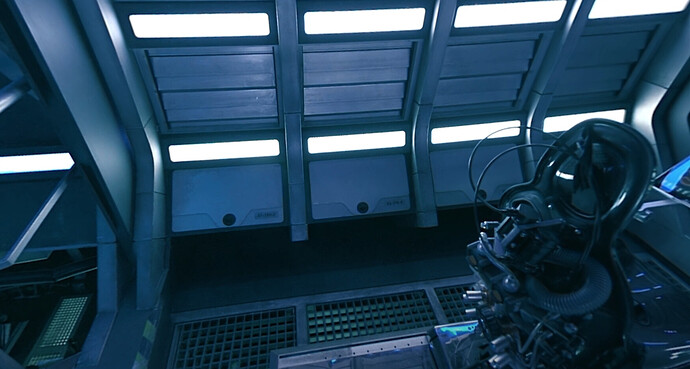 You may already have some resources, but this one might come in handy w/ a 360° view: 360º Rocinante Tour

That’s a good eye on the hatch door (which is indeed custom machines to match the set)! There’s actually something even bigger lurking under the plastic though.

but going to be really cool. I’m converting this part of the workshop into the Roci galley complete with a functioning rotating garden. That’s a big enough project that I’ll post a new thread once I get it up and running. Basically a full hydroponics setup that spins. Shapeoko is making most of it. 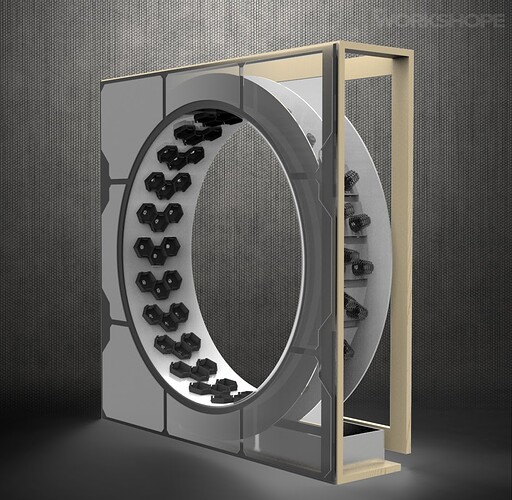 Oh man that’s so cool! I saw the green leaves on the shapeoko, almost joked that you’re making that. You actually are! Excited to see the thread! Have fun and have a good weekend! Definitely do before and after shots! Those are always neat to see

My son got one for Christmas the other year to use w/ Solidworks, and I’ve rather envied that, and really wish that such devices were straight-forward to set up w/ the opensource programs.

Yeah, the conxion software setup to drive the keyboard shortcuts is a pig to set up. It really sucks a part of the donkey