This is a bit strange.

When I go to export the GCode, firstly the save as field is pre-populated with the last saved file name (pointless, but there it is), and secondly, if I click on an existing .c3d file (which shows the file extension) I’m prompted if I want the existing file overwritten, like this (and you can see at the top of the image I am trying to save the GCode): 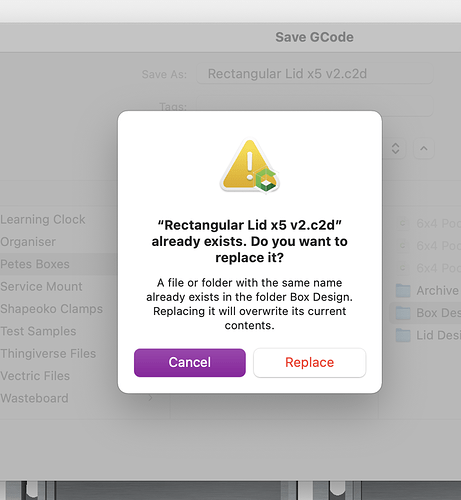 I don’t recall this happening before. I’ve selected the filename and have managed to save the file as *.c3d.nc (which is stupid), so I’ve edited the extension before saving the file, but it’s not threatened to overwrite the .c3d file before.

Is this a bug?

Just to clarify, was the save name field pre-populated with a .c2d file name?
I just tried and can’t get anything else than [project name].nc so I may be missing a step (or it’s the fact I’m using the Windows version, maybe)

Now, if within the Save G-code window you click on a c2d file (why would you do this ?

), or any other existing file on the disk for that matter, you should get this generic warning that the file already exists, and then if you “insist” on picking that file as the filename, CC will use that, and add .nc since it does not already end in .nc (same as if you manually typed “box”, it would saved as “box.nc”). That is common file dialog behavior, not specific to CC? And then again I may be misunderstanding your point

Just to clarify, was the save name field pre-populated with a .c2d file name?

No. It was the name of the previous .c2d file name. I’m using a Mac, by the way.

…if within the Save G-code window you click on a c2d file (why would you do this ?

Because the naming protocol I use is to name the .nc file the same as the .c3d file, but each file would have it’s specific suffix.

…you should get this generic warning that the file already exists…

This is how I’ve done it in the past, without this overwrite warning. In truth, it shouldn’t overwrite because the suffix is different - even if it is *.c3d.nc. If you have a Word document and want to save an Excel workbook with the same name (with different suffixes, obviously) that’s how you can do it.

…if you “insist” on picking that file as the filename…

CC will use that, and add .nc since it does not already end in .nc

… which is what it doesn’t do. It will prompt to overwrite the existing .c3d file, as shown in the screenshot.

I may be misunderstanding your point

…you rarely do, Julien, and for that I’m grateful!

Ok, so there may be difference in the Windows vs Mac version, on my side:

Hmm, I was trying to go through this again, and CC crashed.

I’ve reported this behavior in previous releases…it’s on the list of requested product improvements, bundled under a bunch of very confusing default folder choices that CC makes.

I saw that a while back, but thought it had been sorted - until it stopped doing what it used to do for me, today!

To be fair, I’ve not been CNCing for a few weeks!

This sounds like a combination of a new issue (suggesting a file name with the .c3d suffix and an old issue (not appending the .nc suffix on MACs).

It is a consequence of doubling up the file extension.

If you save a Carbide Create file as:

and then attempt to export a G-Code file using that filename, (in recent/current versions of Carbide Create) you will get the afore-mentioned warning (which is spurious) and the file which is saved will be named:

I’m still hoping @robgrz will take a holistic view of the default naming directories and names across the board in CC… There are a number of product requests tackling confusion and potential errors caused by the current conventions - maybe a single upgrade can lump them all together and resolve the issues once and for all.

Also, noting that different people have different work-patterns, it may be helpful to have two options for the way CC behaves and provide a setting to choose the one that best matches your work pattern.

I volunteer to make a proposal for a solution (taking what I’ve already put in the product requests as a starting point)…if that would be helpful and there was actual interest.