Please add a tiling option to either Meshcam or Carbide Motion. This is super fussy without some help from the tools. Being able to accurately cut parts bigger than the bed easily would be a great feature.

+1
I didn’t realize this was a feature that some CAM programs even had. It would be incredibly useful!

Tiling is awesome, it gives you a “virtual” work area which can be much larger than your actual work area. If I had understood it prior to buying my XXL I might have bought an XL. With tiling you can have as large an effective Y axis as you want on Shapeoko, by feeding your stock through in the Y direction for milling different tiles. Want to mill a 12 foot long by 2.5 foot wide workpiece on an XL? No problem, as long as you have the shop space and sawhorses.

In fact a true 4 foot wide (X axis) Shapeoko with just a couple feet of Y would be capable of working with 4x8 plywood, MDF, and the like right off the truck. You wouldn’t even need a circular saw to trim the stock to size.

Vcarve Pro does tiling really well, although I wish it had more flexibility in where to put the job zero (tiling won’t work in Vcarve Pro unless job zero is the lower left corner, which is not always the best option).

Tiling also solves the problem of “how do you use the machine to mill replacement wasteboards for itself, when the wasteboard is longer than the machinable area?”

On the Nomad, if you removed the back of the enclosure, you could use such a feature to make signs, for example, 8" tall by any length you wanted. Could be very useful!

True, but perhaps more challenging because on Nomad the bed moves.

I’d be pretty happy with just being able to hang something off the front a few inches.

I do this in mesh cam all the time

it works but you got to think about how the machine functions and becomes easy once you have done it a few times. A advantage is you can break up the gcode into multiple runs so you don’t have to run the machine all at once. nice if you have a 2 hour cutting time

The machine does go past the front of the machine by a few inches. I marked on my waste board the limits of the machine in the x y axis just by pushing the router around. I put a 1/4" inside line just for a little extra room so the machine won’t slam into itself. I don’t have limit switches. I also put down a 1/4" plywood on top of my waste board because my machine has a 1/2" waste board and the steel frame stuck up a 1/4" so now I can cantilever out my stock out the front. I guess the new machines have 3/4 " waste boards ?

It’s an even bigger deal on a nomad because the bed is only 8" square and the machine really doesn’t exceed that.

What I’m not clear on is how to set the registration hole in the material, and how to accurately set the keep out region so that when I move it the new region and zero is in the right place. A step by step tutorial on this would be great. I’ve seen it to a certain extent in a couple videos, but the specific placement (and doing so in meshcam) isn’t really clear to me. Do you know of a step-by-step for how to do this? I’ve tried a couple times myself, but I end up with discontinuities between the two tiles that make the part unusable (1/16-1/32 of an inch).

ok so I ll spill my secrets 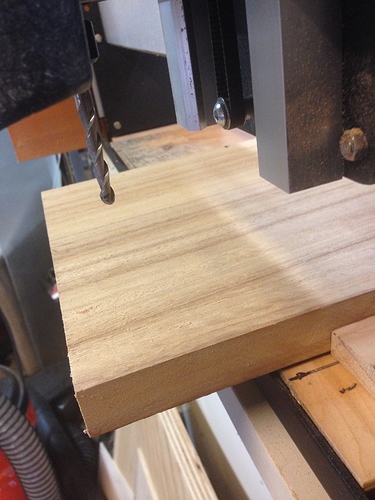 and note the position of the stock in this case I am only doubling the y axis but I suppose you could go on for ever. 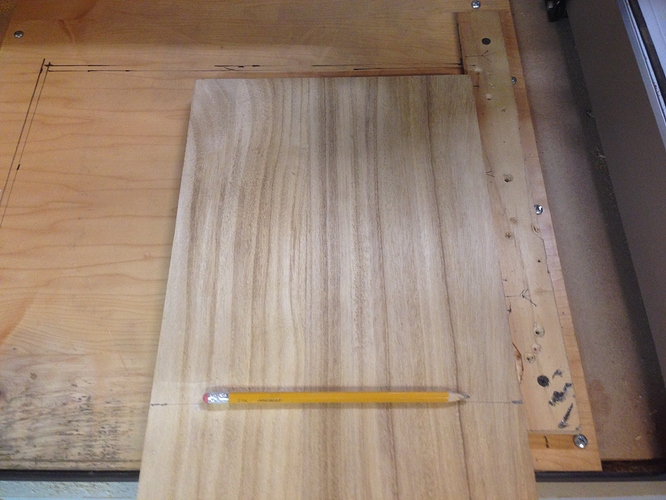 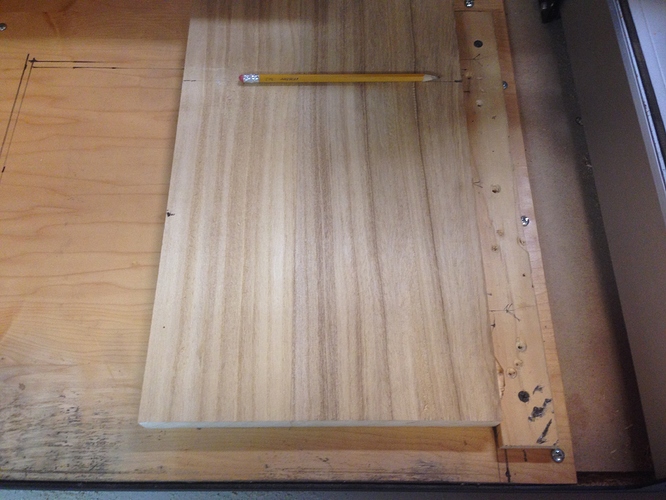 so in mesh cam you just use the exclusion tool to keep the machine in the area you want in the two different shift stock positions. I have not done any supports or anything else in this example, I just wanted to show you hoe the exclusion areas look. note they cover the whole stock size at each end of the workpiece. 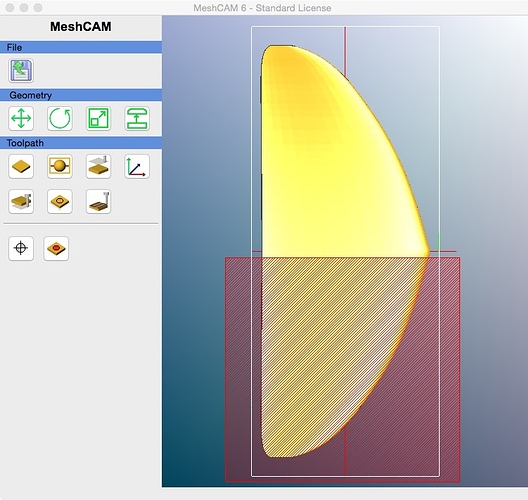 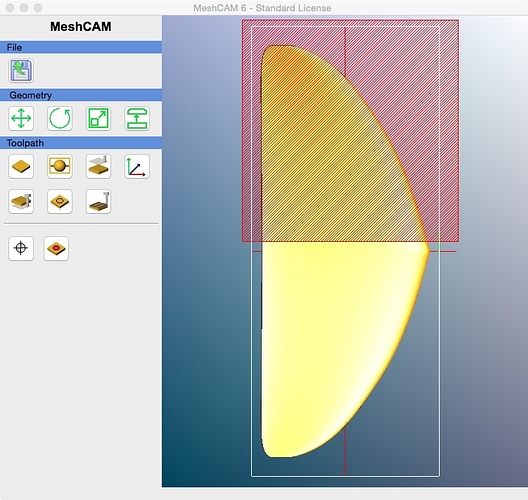 note that I over lap the milling areas to make sure the whole piece gets milled. A little air milling is fine.

then its just a matter of setting your program zero to work with each shifted workpiece. For this wing I set zero in the middle of the stock and drill a small hole in it and use a nail ( pull the nail out when you run the machine ) to register at each shifted location and also drill through the waste board in 2 locations making sure your zero is in the millable area. I actually do 2 sided milling this way by flipping the piece so 4 code runs. You probably could use different locations like center left or right program zero to not put a hole in your finished piece. When you run the code you now have to zero the machine in the locations you used in my case zero center.

The exclusion zones keep your machine from trying to mill outside of the 16 x16 area is can cut in. 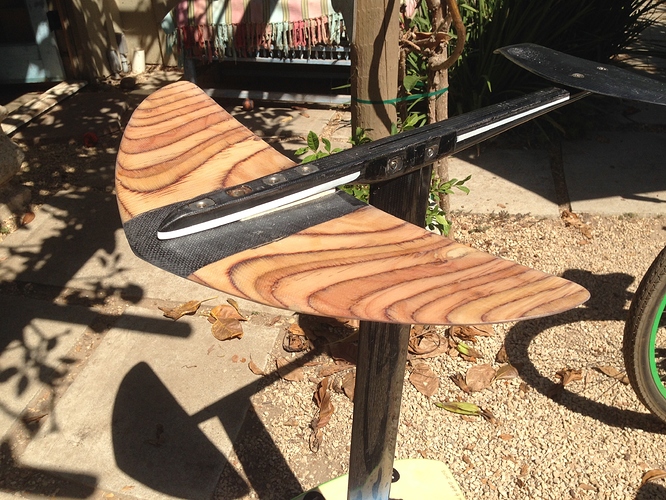 here is the finished piece with carbon and glass on it mounted on the foils fuselage.

Great, that clears up some things! Thanks!

I used a hole and registration pin because I wanted to flip the work piece and do 2 sided milling. You don’t really need a hole if your doing only one sided milling. Just set your z start point accordingly to keep the milling within the 16 x 16 milling area on the shifted stock piece.

Is it just me, or does anyone else notice that sometimes mouse clicks are registered twice? During jogging i see sometimes that I’ve moved 2 mm instead of 1. Or when starting a job I hit “Continue” and end up simultaneously pausing?

Yeah about 90% of the GD time. I even bought a high end gaming mouse. Same results. Wood, forgiving. Metal, chipped End Mills… ($&#%)!!! So now I use the keyboard… NEVER a double step.

New CM for GRBL 1.1 will be MUCH better for jogging. Give us a couple of weeks to get it out.

Any word on the probes?

PCB’s are in production now