Text character spacing would be useful, maybe a user selectable percentage of font height. A lot of times I have to import text from Inkscape or Affinity Designer to get the spacing needed to get a clean carve between characters.

Hi Ed. I guess lots of things would be useful but I find the underlying core of CC is probably not amenable to what we may think of as normal behaviours for a design type software. I am happy to be proven wrong but I see too many legacy decisions that would create the need for a complete re-write.

You mentioned Affinity Designer (AD) and given that it creates curves from any font, I wondered why you would not use that for accuracy and comprehensive adjustments. The only caveat I can think of is that you must remember to export your .svg file at 96 dpi. (don’t ask!) If you do that you can guarantee that your specified sizing and dimensions will be as you have drawn them when taking the image into CC.

The image below is a screen grab and an example of the truly excellent text handling facilities in Affinity Designer. 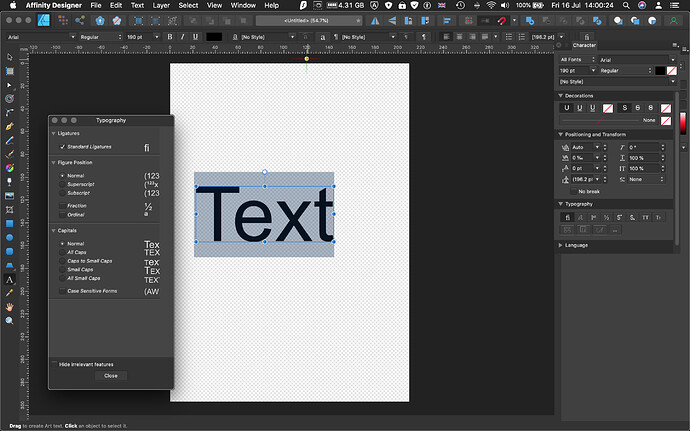 You can control Kerning, Tracking, Baseline, Leading, Shear, H scale, V scale and sub or superscript from that palette. This is in addition to ligatures, small caps, all caps, ordinals and contextual alternates.

I suppose my point is that with all of that control, why would you want to use anything else with far less control and accuracy? I don’t know Inkscape at all well but if you are already round-tripping to Inkscape or Affinity Designer, I would argue that the CC programming effort could be expended on things for which we do not have any excellent and superior work-arounds.

Anyhow, this was not intended as a critical judgement of your point, Ed. I thought you may not be aware of everything offered in AD. If you are, then my apologies and the greater point stands with reference to early future programming effort for CC.

Hi Jeff,
I agree with you that when it comes down to control over text adjustments your just not going to beat Inkscape and AD. As a long time Inkscape user and new to AD I see both are very similar and are great creative tools.

When I put my first CNC router to work many years ago I used F-Engrave for design and to generate gcode. The text spacing and v-bit clean up options kind of spoiled me. I see now even LightBurn has character spacing.

Hi Ed, yes, I do see that there would be more than a measure of convenience in such an addition. I have never used software of any description where I did not think “what if I could do this…” or “if only this or that…”(this software would be much better). I am much more selective these days. Probably because I have a fair idea of the what I want the output to look like so I use a design tool that helps me to achieve that specific output. The images referenced by the link were designed in AD. Not because AD is known as a toolmaker’s design tool. I used it to make a part for my drill press because the design language used by AD is something I understand.

As a design tool, CC is quite limited. CC can assist a person to accomplish simple tasks but it can be quite a task in itself to use it for creating a comprehensive design. If there was nothing else available, many people would and could make it work and discover all manner of work-arounds. I find that unnecessary these days because so much software on offer is rather capable.

I use CC quite a bit mainly because I can check the simulations and decide if I need to make adjustments on the fly.

I note that CC provides a preview/simulation and that is a great help. Oftentimes, it is sufficient to see what output the code will generate. There are occasions when the preview is not sufficiently detailed then I need to use .nc viewer or Camotics to preview the file.

When I put my first CNC router to work many years ago I used F-Engrave for design and to generate gcode. The text spacing and v-bit clean up options kind of spoiled me. I see now even LightBurn has character spacing.

I think it is worth noting that ‘many years ago’ much software did not play nice with much similar software. You mentioned Lightburn, which has to be an industry leading software at the hobby end of things. It can handle around 18 different filetypes, which opens many options for the user. It drives diode lasers and it also drives CO2 and fibre lasers.

That would mean it could be used in industrial settings. I have no idea whether it is robust enough for an industrial setting but it certainly feels comprehensive and I get great output from my Lightburn files. Needless to say, I don’t do my designing in it although it possibly would be easy enough to use.

My point is that interoperability of filetype and less restrictions with physical computer memory and storage means that software is less limited by external constraints. User knowledge and task to be accomplished is far more likely to be the hurdle facing much software. When I want to create an STL height map, I have to use software with which I am unfamiliar.

It is not that it cannot be done, it is just that I am limited in my scope because of my poor understanding. It would be much easier for me, if CC generated bump maps and 3D data as an STL file but I don’t ask for that. It would be way behind the curve of software that is dedicated to the task.

AD is a reasonable replacement for people who knew Illustrator and Freehand. Furthermore, it has no permanent rental model of business. Adobe make that work for them but these days it can be seen that the position of 800lb gorilla for all of their design software packages has been eroded. The face of image manipulation has changed (pioneered by GIMP and many others following suit) and now Affinity Photo, Designer and Publisher means that I have no need for Adobe’s software.

The only software I really miss now is Acrobat. My last version (version 11) cost me around £600 and it was effectively obsolete as soon as I had purchased it, with its constant cloud update reminders. There are now other programs that one can use… admittedly, nowhere near as effective as Acrobat. Not owning software after paying substantially because it has become a service, does not appeal to me.

Finally, back to your request. I see that it would be handy to have. If I was a developer, I would know from requests received which were the most requested updates. Recently CC acquired layers. No doubt that layers are useful and Lightburn’s own implementation is really simple to use.

I had no need of layers because I don’t design in CC. My preference would be that what is there actually works in a more effective way. Take grouping… a grouped set of objects becomes ungrouped as soon as you move it… why? So default behaviours like that in CC ought to be addressed before I would choose to design any work in it.

I think that the crux of the decision to leave it with all its irritations must be based around the notion that as a design application, CC is already way behind the curve and cannot compete with full design packages. What is provided is done as a matter of convenience (so the CC tool can be offered to start new people off) not as a matter of CC being the last word in design tools. Fundamentally, that is what drives my decision to design in other applications.

Good idea Ed, we hadn’t considered that but we happened to be making changes to the Text command this week.

We just added a “spacing” option to the Text command in Carbide Create V6 (which should be in public beta in a couple of weeks.)

Thanks Rob.
I just saw CC beta 605 released with the text spacing option, works great and will be a time saver!

What does the “group letter vectors” & “convert to curves” functions do in text? I have messed with them and can’t figure out what they do.

Convert to Curves converts the font into geometry, so that it can be modified: 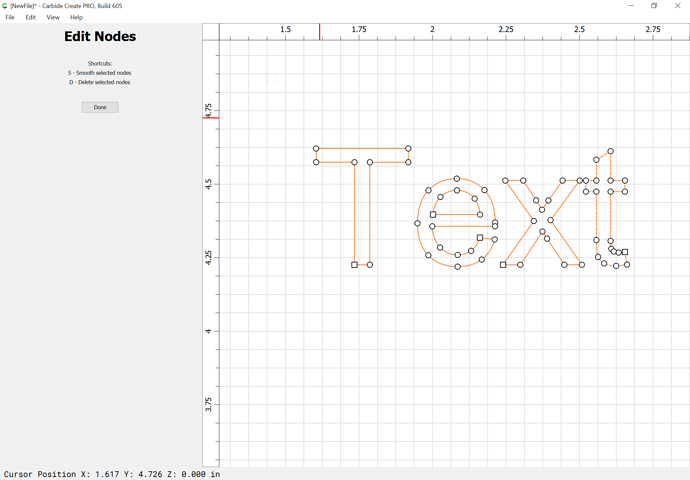 What does the “group letter vectors”

That would group individual characters together. For instance, on a lower-case “e” or “I” the two vectors would be grouped together. It wouldn’t do a thing for an ‘L’