Feed and speed and my view

What he said was in my view correct

Look at you waste product, if you have lots of sawdust then you running too slow feed with to high rpms
I ran a job where the bit plunged in .25” right off the bat instead of .125 which I intended however the machine did not strain and the chips were as he described and not sawdust
This has changed my perception, I always thought a little at a time, the less the better but apparently more is better to a degree
Sorry if I’m not making sense but I’m English and just found a bunch of Guinness at my local store to indulging
I guess what I’m trying to say is forget the tables you look at for feed and speeds and look at your waste product to work out if you good to go !!

You are correct that you want to produce chips and not fine sawdust. Hobby machines cannot stand the strain an industrial machine can so adjust f&s to get chips but 1/4 inch plunge puts a lot of strain on motors, belts and 1.25 hp routers. You may get away with that much plunge but over time you pay a toll.

Drink more Guinness and think about it some more.

What @gdon_2003 said. You want well-formed chips rather than sawdust indeed, however you also want to not cut too deep per pass to mitigate deflection / keep cutting forces in check. While proper chip thickness is essentially just feeds and speeds math for a given material and tool, the max acceptable depth per pass is a matter of experimentation (and of the machine type: a Pro is more rigid and will allow deeper cuts)

Ages ago, I obsessed over chips and did the kind of tests below to inspect chips at various feeds and speeds 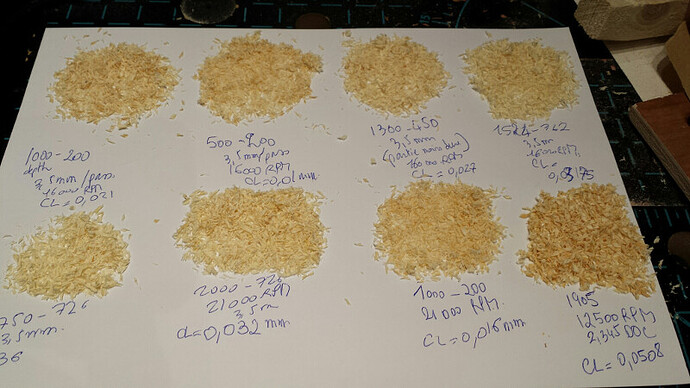 For depth of cut, 50% of the endmill diameter on a Shapeoko is usually a good setpoint, but yes you can go deeper in some material (and/or on a Pro). You also have to factor in chip evacuation, because the deeper the cut, the harder it is to get those chips out of the way, and this affects the cut quality/efficiency.

The feeds and speeds table should only be a guide/starting point, but then experimentation is key, indeed!