Feeds and speeds for regular ol' birch plywood and pine

I took my XXL for a test spin and had a couple questions I was hoping you guys could weigh in on:

I’ll mostly be cutting either pine wood or baltic birch plywood, using an 1/8" end mill. Carbide Motion’s suggested speeds seemed a bit slow to me, but I definitely don’t want to break a bit.

-Do you guys just set your Dewalt routers to 6 (i.e., 27,000 rpm) for every project? In what scenario would you want to set it slower?

-How fast would you set your machine for the scenario above? I believe Motion suggested something like 19 in/min, and it took quite some time to get through some 1/2" plywood.

-Also, (unrelated) I’ve just been using Inkscape, Carbide Create, and Carbide Motion—but I keep hearing about MeshCAM. Is that supposed to be much better?

Thanks for any input, guys!

@Tsamb I have been thinking about those same questions and I’m sure the smarter folks here can answer those. I can respond a little to your last question. I was/am using same programs Ink,CC and CM and feel limited. I have been testing trials of MeshCam and Vcarve Desktop the past couple days. I feel like you can do so much more and have more control with these other programs. As CC is in beta and lacks some features and polish. I am personally leaning towards Vcarve. I would say try the trials of these different programs and see which feels good to you

MeshCAM is a commercial product for full 3D — if you need to do that then it’s a good option.

@Tsamb For pine I normally run 70-75 in/min with a .08"-.085" step down and stepover. I normally leave .02" of material and then run 100-115 in/min on the finish pass. The finishing pass at these speeds works well for hardwood too. All with the dewalt on the lowest setting. Take a look at gwizzard. Sign up for a free trial, the feeds/speeds in the calculator works very well.

The 611 can run router bits, when running smaller end mills use slow settings and a little faster feed rates and you get a nicer finish from what I can tell. For pine I’m near 60-75 IPM with a .25" endmill can even go faster if you lower the depth. My depth typically is about 40% of the diameter of the bit. The speed of the router is normally 1 or 2. Hope that helps for a reference point.

One thing for sure, if you see or smell burning in wood it typically means you are cutting way too slow or your router speed is way too high. The only other thing is it could be a dull bit, but if it is not that old most likely its either or both of the above two issues.

You can get an idea about speeds by listening to the cutting… as weird as that sounds and looking at what your sawdust.

I’ve done single cuts in the same material at 2500mm/min as well but you have to crank up the RMP a little more. At this speed the top surface does chip a little, I would experiment.

I don’t know about you guys but I’m not having any problems roughing running 120 IPM at .25 deep, 0.23 cut width with a .1/4" endmill on roughing passes for soft woods. I use the slowest Dewalt router setting on anything using a 1/4" or larger bit. I slow down to 60 ipm or so for the finish pass. I also leave 0.6" for the finish passes in case there’s much deflection during the high speed roughing.

Based on GWizard, it looks like there’s room to push the feed rate up even higher. 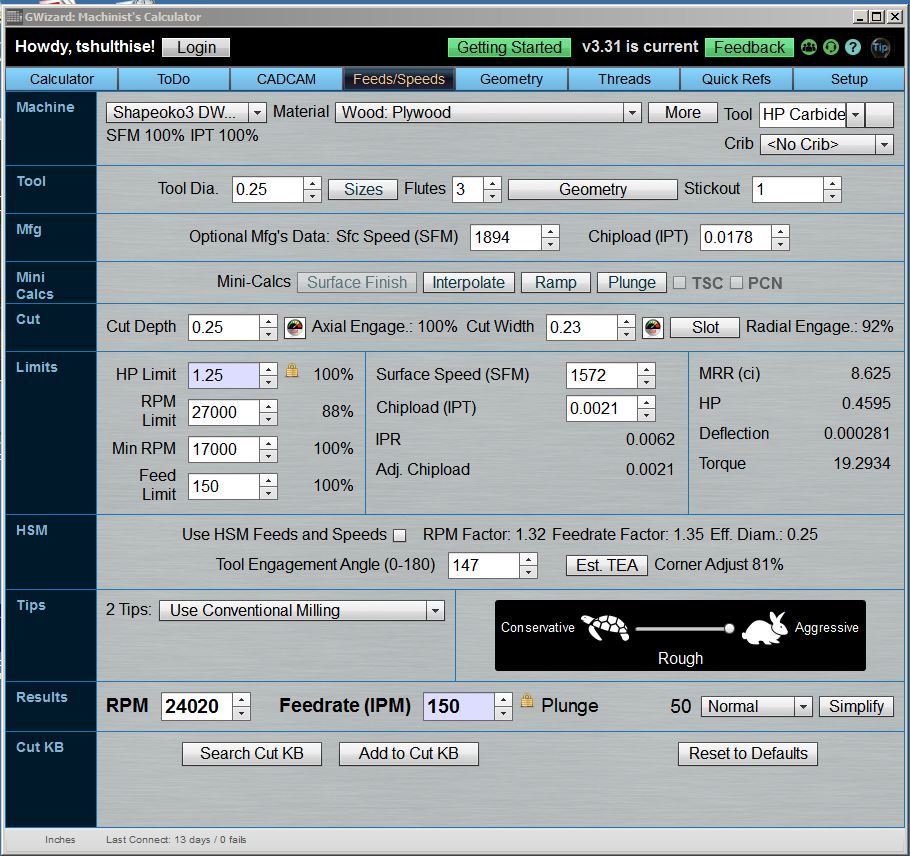 I don’t care if I burn up motor brushes. That just means I’m saving hours over the life of the brushes. Brushes are cheap and easy to replace. I want to push the machine to its limits for the roughing cut then back off to whatever it takes to get the accuracy and finish I need.

Warning… I tend to push everything until it breaks then I back off a little. So far I’ve run a lot of wood through my XXL and I’ve done several projects on my Nomad and haven’t broken a bit yet. Its very gratifying to see the dust filling up the cyclone collector as its cutting. I wonder if the SO3 is even powerful enough to break a 1/4" bit?? (it can easily break a 1/8" bit) I’ve hit steel screws several times that caused it to lose steps without breaking a bit. I just use the same bit for experimenting and save the sharp bits for the projects that take longer or that need the best finish.

19 IPM sounds more like Nomad speeds. That would be insane on a SO3. Push it for all its worth on the roughing pass. Life is too short to be waiting on chips

I rammed a 1/4 shank 3/4in wide Straight plunge router bit into the steel frame in the front while trying to face my MDF… It proceeded to cut the steel for a few seconds until one of the v-wheels cracked which loosening the x belt making the z plate fly over to the right most y rail finishing off another v-wheel and making the entire z plate come undone from the rail putting the router at a 240 degree angle so the router bit wasn’t hitting the steel anymore… router bit looks fine.

Edit: Also If you use a folding table it’s not good to slam the x rail like a guillotine at 90 degrees from the top of the y rails. This kills the Shapeoko 3 xxl… ok well it killed about 8 of the v-wheels lol

The only concern about doing 120 IPM is the inertia of the machine itself. I have a regular SO3 so maybe the upgrades that go into the XL/XXL more than compensate for the increased mass of the longer gantry and such, but you just want to make sure you’re easing into and out of corners of your tool-paths so you don’t skip steps or have too much belt-flex.

If the belts (and v-wheels) aren’t sufficiently tight you can get noticeable deviations in your paths from play in the system. I’ve had to slow down a bit especially when doing small circles because otherwise they end up as ovals and slightly too small.

The only concern about doing 120 IPM is the inertia of the machine itself.

I still get inconsistent accuracy for feature sizes but I wonder if that’s not related to the goofy tool paths and order of operation that MeshCAM often uses combined with the flex that the SO3 has in the z axis and the bed. Some cuts are near perfect and other times I might have a feature that is 0.030" undersize. I need to experiment more to try to figure out where the issues are. I know the Z axis isn’t very stiff. The XXL bed is also not stiff at all unless you add supports in the middle.

I also sometimes have to use a very slow plunge (like 5 ipm) to avoid missing steps in the z axis when I make deeper cuts. I believe that using a lead screw on the Z axis would be a much better design for the SO3 for more than one reason.

Thanks, Will! Is that the only reason one would want to run at slower speeds, just to save the router from wear? If I’m understanding some other posts here, it could burn the project to set the router too fast and the IPM too slow?

@lxkhn, can you make the tabs using Carbide Create? I ran into some trouble thinking I was leaving an onion skin at the bottom of my piece, but turns out it was cutting clean through (I didn’t remeasure my wood from a different section) and it hopped up on me and dragged through the piece. Seems like tabs might be a bit more safe!

Thanks for your patience with my newbie questions, guys

@lxkhn… I don’t know if you meant that to be humorous but it made me LOL. It sounds like something that will likely happen to me eventually. Good thing the parts for these machines are relatively cheap, isn’t it?

I think you ran the ultimate 1/4" bit endurance test. I hope you get up and running soon if you aren’t already!!

Carbide Create does not (yet) allow tabs.

Like @Tshulthise I got my baseline numbers from gwizard, but I tend to shy towards slower then faster. It’s easier to wait longer then wreck and expensive piece of wood. Most everything I cut is hardwood with some plastic and aluminum thrown in for fun.

In the finishing pass I speed up because I’m only taking a 10% stepover. I should mention while I chose 115in/min feed, I still limited plunging rate to 60 or 70. The whole finishing pass took about an hour. Roughing was about 4 hours. In roughing I left .02" of stock. Overall size is 15" diameter. 0.6" thick.

This is going to be a updated page as this project progresses. It is Saturday, and I can't think of a better way to start a weekend then this and some milling [image] [image] Edit: Progress [image] Roughing done [image]

Wow, that’s beautiful! Thanks for the info

Yeah no tabs inside Carbide Create is the main reason I don’t use it… I don’t like my work flying out of the machine when its done…Call me crazy I guess.

It might sound silly but I do all my 2d and 3d work inside Fusion 360… I mean technically the thing you are making IS 3D no matter what you are just cutting in 2D which Fusion 360 has options for.

An option for those who want to use Carbide Create but aren’t ready or able to switch to another software is to include the tabs in the design. Sometimes I find its easier to just add the tabs in my CAD model rather than using MeshCAM to create them. Its a viable option and even preferable in some cases.