I am making an outdoor sign for a friend that sits at their driveway at their lake house that has their last name on it and their favorite saying. I am planning to make it out of cedar, v-carve or pocket carve the text and then was planning to seal with marine spar urethane. I am going to paint the letters with black spray paint or acrylic paint. Is spar urethane the best to finish cedar with? Should I even bother putting a finish on cedar?

The spar urethane will slow down the greying of the wood. It should be reapplied at least every 2 years.

I think a house in cedar starts to look better with the greying, but a sign will look better without it. Also, cedar will start to have a weathered look which will make the sign less sharp looking.

Thanks for the input. So is Spar Urethane the best finish to use on cedar for outdoor, or is there something that would hold up better?

I use Sikkens Cetol 1 on cedar. It’s much longer lasting than spar varnish or Urethane.

I’ve recently been cutting a few cedar signs for a similar purpose and it’s been an interesting learning experience. First, I stained the wood black so that I could engrave out the nice cedar color beneath for contrast. It looks good but cedar fibers are very stringy and quite strong, which can result in quite a bit of chipping if you have fine detail. CarbideCreate doesn’t give you a choice between climb and conventional cutting (nor does Fusion360’s engrave toolath), so a lot of these fibers end up peeling off as strings rather than nice chips, and fine details often get knocked off instead of being milled around. I’d love to find a way to get around this, either by something that can do climb milling or some sort of topcoat or masking that will prevent the chip-out (no hobby money to pay for v-carve + parallels + windows).

So yeah, learn from my mistakes. Still not that bad for CC “advanced v-carve” to 1/4" deep cleared with a 1/4" endmill and finished with 60° v-bit. 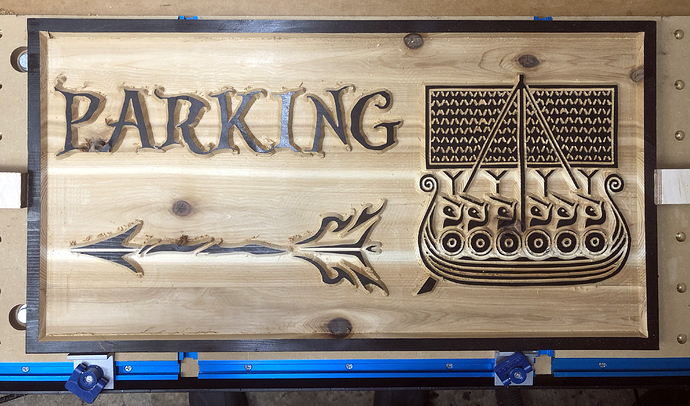 I’m just using boiled linseed oil as a finish on these, since they’re mostly going on private roads in the forest/woods and I don’t mind that they will grey (they’re also not permanent so it’ll be easy to re-finish them as needed). I’m also putting it on about 5x thicker than I should since I know it’ll soak in and have weeks to cure outdoors. Will have to check out Sikkens Cetol 1 for future “real” outdoor projects, though.

I’d love to find a way to get around this

Does the chipping occur during the clearing with a flat endmill, or during the Vcarving phase ?
When the project allows, you can orient the wood grain at an angle, which lowers the chances of tearout along the grain (of course this only works if the majority of the toolpaths is horizontal cutting passes). Another solution I like is using a downcut endmill. And there’s always reducing depth per pass, at the expense of cutting time.

Does the chipping occur during the clearing with a flat endmill, or during the Vcarving phase ?

Both. I switched from an upcut to a straight mill, which helped enough that I didn’t go one step further to a downcut, but the v-bit still cuts large strings when running with the grain and knocks corners/sides off of smaller details like the letters or shields if there is much of an offset in the direction of travel (diagonal is worse than parallel or perpendicular). Basically, the blade of the bit gets underneath a few of the fibers and peels it up as it moves along, rather than cutting it … the long fibers are very strong but easily sheared apart from each other (think string cheese) and some of the longer strings from the long straight sections of the cut were over 8" long. I’m not sure if this is specific to the lumber-grade cedar I’m using but it’s definitely different from other softwoods (and certainly from hardwoods). It’s also different from fancy/aromatic cedar, which is a bit stringier than some woods but otherwise mills beautifully.

Depth per pass didn’t make much of a difference – there were problems at each of the two .06" v-carve passes and at the final .005" (again, this has to do with “surface” quality and the v-bit by its nature is always at least partly engaged with cutting portions of the top surface). Plus, slowing down what is already a 6 hour cut seems extreme. The best solution so far has been to first run a .02" inside pocket with a downcut bit (or even just the tip of the v-bit) to “break the grain”. This minimizes tear-out at the very top layer but still doesn’t solve things completely (it also leaves a thin shelf at the top of the cut that will be prone to peeling/delaminating over time, somewhat defeating the purpose of using a v-bit).

Software-wise, there are two things I think would help here (was just about to email these suggestions when I saw your reply here):

two interesting ideas/options, that you could submit as feature requests for CC?
(I’m all for climb cuts becoming the default)

I have never used Oramask and the like, I wonder if apart from their primary use (masking for paint jobs) they would also happen to reduce tearout along the grain…

Nope. Masking will not change this kind of tear out; it will just keep it out of the vacuum.

Your tear out problem exists because of your choice of wood. That happens with some pine that I’ve used, too.

Solution? Change wood, or paint sign. You’re not hanging it in the Louvre are you?