First full run on the HDM after minor issue

The HDM has just been sitting in the garage for a few weeks now as I just haven’t had time to get it running lately. I thought I’d be up and running this weekend, but unfortunately the Y axis was intermittently hanging up. I could hear the Y motors running, but it would just hang up intermittently and I’d have to shut the machine down. A couple of emails and phone calls later Fleming was able to diagnose my problem in about 15 minutes. Evidently one of the Y axis couplers was missing a screw. I trip to the hardware store and a 55 cent M4 screw and I’m back in business. The big brains at C3D think the coupler may have been damaged from free spinning, so they are sending a new one.

Today I was able to complete my first ever CNC job. It’s just a simple cutout of some MDF for what will be a ribbon holder for my wife. It took about 36 minutes and the entire job was performed with the #201 that came with the machine.

My Wen dust collector worked much better than expected. I made a 4" to 2.5" adapter to attach the 4" hose to the Sweepy. There was almost no dust whatsoever left over. What little there was took about 10 seconds to vacuum up.

The Kreg workbench I have on the machine was very stable. There was some small vibration felt through the table which I think is unavoidable, but the table did not move at all despite not being bolted to the floor.

One snag I ran into was the PC overheated, fortunately not when I was running the job. I’m running Carbide Motion on a mini desktop PC and it just couldn’t take the 100+ Texas heat today. I’m going to have to build some kind of heat sink and/or fan to keep it cool, but for today I just put it on top of a cold pack from the freezer wrapped in a towel and it was fine. 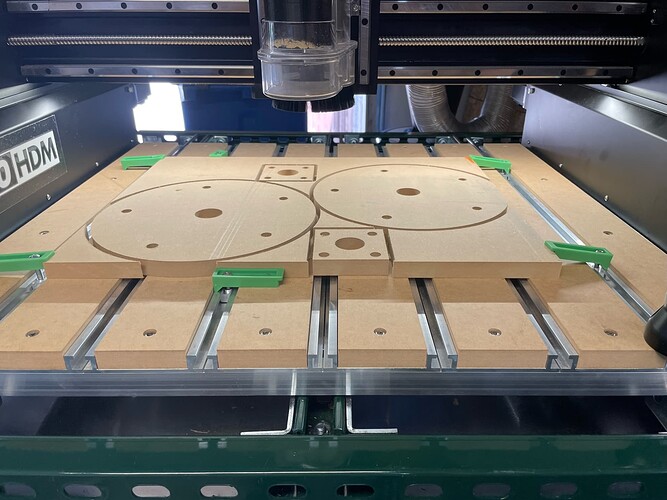 I had a Dell small form factor computer I used to have dedicated to the shop. It was on a shelf inside a cabinet and I live in East Texas so I understand hot. I bought a simple little usb powered fan and put that inside the shelf with the PC to evacuate the heat. Maybe a little usb fan might help blowing on the front to super charge the air. Most computers run the air from front to back. You can test that by putting your hand on the power supply and see if it is blowing out. The power supply is usually at the back. If you dont feel any air maybe your power supply fan has gone bad.

You could just air condition your shop so you can watch your light meter spin off the wall. I just keep 2 big fans running 24/7 in the shop to circulate the air. It is blowing 100 degree heat but at least the moving air keeps me mildly cooler. I have seen videos that say running a fan when no one is in the room is a waste of money but I find that circulating the air keeps my shop a few degrees cooler than outside at night, well 3-4AM.

It’s a fanless mini PC, but I think you have the right idea. I ordered a cheap simple fan designed to go under a mini Mac and I think that might do the trick. It’s been running OK most of the time, but when the temps got above 100 it it started shutting down. I suspect just a little help should do it.

In this thread you can find all the details on how I made my table:
https://community.carbide3d.com/t/new-to-shapeoko-new-to-hdm-new-to-cnc/44450/22

Hey congrats. I have an HDM on order and am looking forward to using the machine. This turned out really nicely.

I’m curious about what tooling you used.

I used the #201 for the entire job with the default settings.

Thank you? I’m still debating whether I want to go with the Shapeoko pro XL or the HDM

If you wish to do large-scale work, esp. w/ wooden boards, a Pro XL is a good fit — if you need faster material removal rates, in a wider variety of materials, and your parts will fit on it, get an HDM

I had a Shapeoko Pro XXL and then sold it because I got tired of fiddling with belts. I’ve been holding off on purchasing the HDM b because there was some mention in the forum that 3CD may offer a larger HDM. This said, If Carbide were to offer an accessory to help simplify belt tensioning I would probably buy another Pro XL. A Shapeoko pro with ball-screws would be nice too.

I had a Shapeoko Pro XXL and then sold it because I got tired of fiddling with belts. I’ve been holding off on purchasing the HDM b because there was some mention in the forum that 3CD may offer a larger HDM. This said, If Carbide were to offer an accessory to help simplify belt tensioning I would probably buy another Pro XL

I’m curious about the fiddling with the belts. How often did you have to do this and how often were you using the machine?. Both on my SO3 back in the day and now on my SO Pro XXL, I only check the belts maybe once a quarter or so (but I’m not using it daily though) and forget about them the rest of the time. And while some folks on the forum don’t like the belt clips (and have come up with all sorts of ingenious systems to tune the belt tension), I always wondered why it would be seen as such a hindrance when it’s a 5-10minute thing that I do very seldom (and then again, this is a hobby for me, so I would maybe see things differently if I were running my machine 24x7)

I was using the machine about four times a week. The biggest challenge was the belt would slip loose from the clip while trying to tighten the M5 screw.

I have a Shapeoko 3 but the belt issue on a new belt is the same. I use a medical clamp to hold the belt in place so it does not slip out of place while I tighten the bolt. 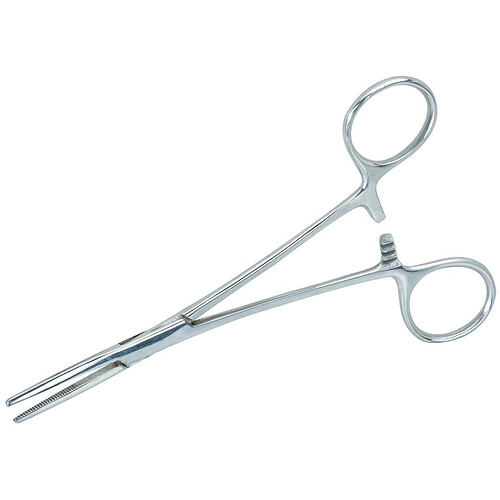 Once the belt is in place a while it gets a crimp that will stay usually if you have to remove the belt for some reason.