I wanted to try something simple for my first project, but with multiple tool paths and endmills. I decided to give the paradise box a try, except I copied all the vectors into on project and did my own toolpaths for the practice. I had some issues to overcome: the pully on the Z servo came loose, it appears there was only one set screw in it. Fortunately I had ordered the maintenance kit so had a few spares. My second issue was the laminated board I wanted to use had a slight warp and pulled away from the masking tape/CA glue. I adjusted the layout and put screw through the board in a safe location. My third issue was a result of my suckit dust boot. The 2.5" hose was against the router mount and caused some slippage. I’ve since modified it with a smaller hose and resolved that issue.

All in all, it was a great first project with lots of lessons. 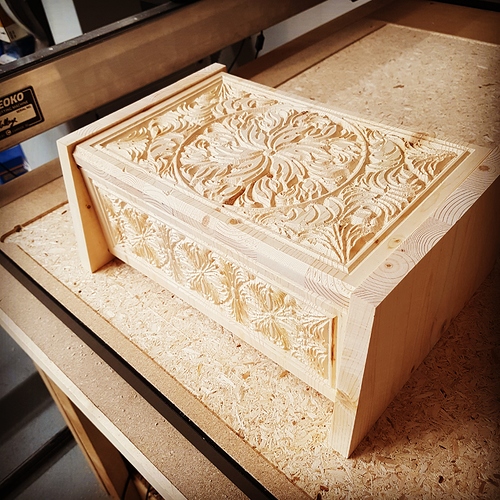 I wanted to try something simple…

Let’s just say it sounded simple when I started… lol

Only one of the set screws matters. You’re actually better off putting the 2nd screw behind the first one, it helps prevent it from backing out. Then again so does loctite.