It’s been awhile, finally got back into the shop!

No real measures, no primitive shapes, no hard angles. It’s certainly a departure from my comfy and cozy world of fusion 360.

My reference image was basically a relief already so I’m definitely not breaking any new ground here.

The process of converting an image to a relief has been covered many times so I’ll do the Cliff notes:
Took the reference image and converted to a height map.
The generated map was pretty rough, especially around the dominant facial features. So I did a fair bit of digital sculpting and smoothing until i felt it looked “right”.
Cut the entire relief with one pass in a raster style. I’m used to working with metals, seeing my little nomad pull off a 5mm doc was kind of hilarious compared to my usual cuts. 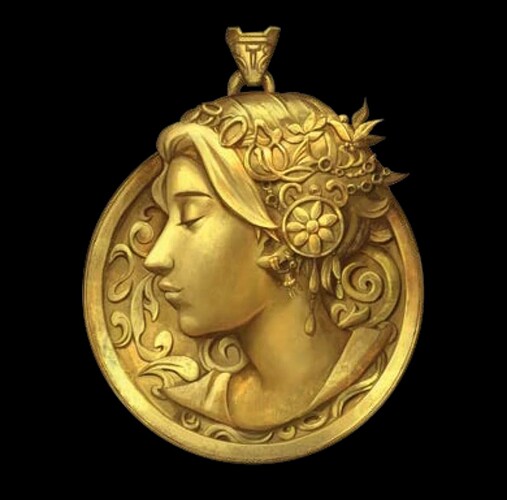 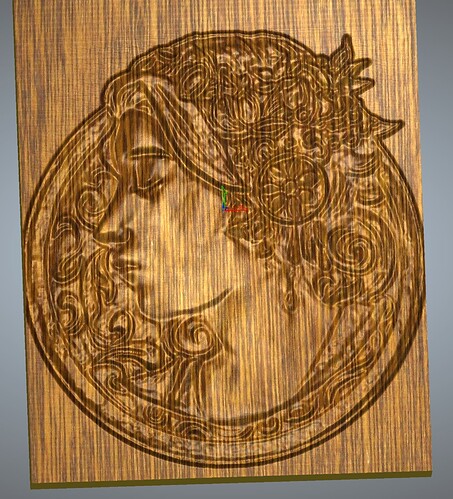 Real cut(unfinished, straight off the machine): 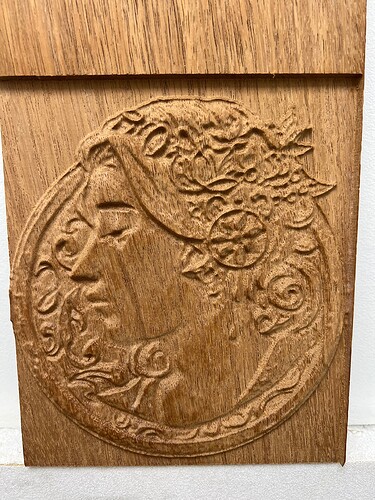 All in all, it’s been an interesting journey requiring a very different workflow than what I’m used to. The results are satisfying and tickle be brain in a different way as well. Neat.

This is really beautiful to me. I’ve got a few questions if you don’t mind.

Wow, that is striking. It looks like red oak to me and that’s a difficult wood to mill on a good day. The grain and texture really adds to the beauty of your piece.

I’m still on 2D standard CCreate, but when I make the jump to Pro, I hope I can create things half as beautiful as your project.

Thank you for sharing your work.

This piece was done in carveco maker +
In my limited experience, carveco is:

I did purchase a carbide create pro license over the weekend so i hope to see what i can do with a more reasonably priced/approachable program.

Carveco gives you tools to work with the object like a digital clay model. Like actual sculpting, so i didn’t have to do the “cleanup” in grayscale or anything like that.

I’m hoping i can accomplish similar results in carbide create pro but I’m guessing another piece of software will still be required in the workflow.

My approach for cc pro is going to be:

I’ll certainly provide updates on how this approach goes in the coming weeks.

For this particular carve, i wanted an aesthetic that looked roughly hewn. Something that could have been done with primitive tools in stone. That really gave me a lot of leeway in terms of aggressive smoothing and loss of detail. It was a fairly forgiving project all things considered

Oh and the dark grain running down her face looks like a tear. That was complete coincidence. Wood is weird

Thank you for the kind words, I appreciate em

I’m pretty sure this is Zebrawood. I just got a hardwood sampler with a bunch of 6"x12" boards to play with. I’m really surprised at how little tearout there was consider the long grains on this stuff.

That said, I know more about stars than I do hardwoods…and I don’t know squat about stars

It seems like you are on your way to a much higher proficiency in this kind of thing than I’ll ever see. Even attempting a guess at which wood this is tells me your knowledge of the medium is heads and tales above my own. I expect in 6 months I’ll be asking you how I can get my carvings as clean as whatever you’re doing

How did you put the tapered ball nose into Carbide Create? I have entered new tools in before, but I don’t see a way to combine the properties of a V bit and a ball nose in the tool library. I have to enter it as either a V bit or a ball nose.

In CC, just enter it as a ballnose. It will assume straight sides instead of tapered, but most of the time it doesn’t matter.