I’m working on my first cut which happens to be a Myers wasteboard. I’m confused on something. I followed the instructions precisely and seems that my stock is higher in the middle then it is on the four corners: 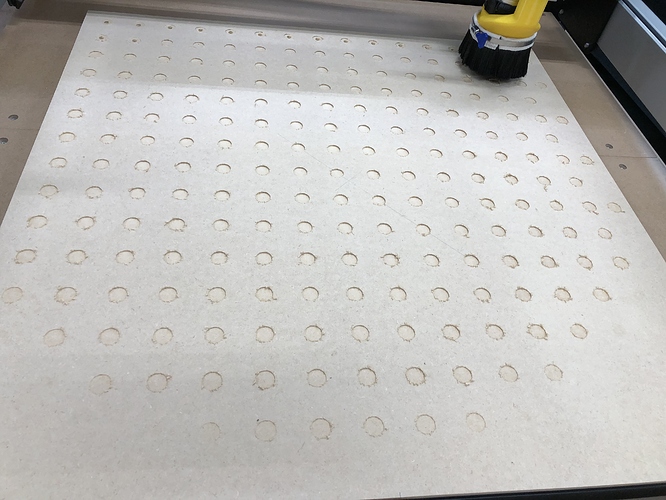 I always assumed that no matter what the curve was, i could just finish the bottom part, flip it over and surface it. But with some of the holes not cutting at all, the t-nuts won’t be flush. So i’m a bit confused… thus my question is how can i deal with this? Should i continue through the entire gcode and flip it over to resurface? Perhaps i should stop all together and just surface this “back” side then run the program again.

I will, great suggestion, although i’m not certain that’s it based on a noticeable bow along the edges of the stock. Makes me think it is raised up in the middle and when I push there does correct the edge bows.
I’m wondering if I should just add a few more brad nails to get that center down… re-zero the Z of the workpiece and repeat the program.
Since the wasteboard will be flipped over and screwed down in the four corners, and perhaps needing an additional screw in the middle before surfacing.

So, that’s what i ended up doing… after adding a few brad nails in the center, I moved back to workpiece-zero and sure enough… the z was nearly 2mm bowed in the middle. Rerunning the program and i’m getting the expected results… yay!

Nice work! It can be hard with bigger material like that when it’s not dead flat. I often work out which areas will be scrap and put some screws through into the wasteboard to hold it down. It doesn’t work for every job (and obviously not on a wasteboard)

Walked through all three guides, pulley-screws, tensioning-wheels, and belt-tension but everything was spot on.
So 90% of it worked perfectly. The front two rows are still too high. Probing around, it seems the entire front of the spoil board dips down by 1-2mm. This obviously will be cleaned up with surfacing the top… but any suggestions on cutting these two rows again in order to get the t-nuts set properly?

I’d just work up a job which pockets the problematic holes 1mm down from a suitable safety height and run it as many times as was necessary, adjust Z zero down as needed.

Noticing something odd… when the router goes to make the deep cuts, before it hits the surface of the stock, it’s already hitting -10mm. This results in all of my deep cuts being far off from what they should be. I have it properly zero’d at the surface and the router is all the way seated in the bracket.
I’ve also noticed the first one or two times it goes down, there’s clicking which i think is messing with the zero.
Any idea what’s happening here?

Ok, may be z-axis tightening problem… Help with knocking on the z plunge
had to take the spindle completely out to even see that it was one of the z-axis wheels.

Oh, it would seem the problem persisted with the z axis changing zero. It was less pronounced at 9mm instead of 12mm but i’ve discovered the cause… My dust boot’s brush was pushing hard enough on the spindle to cause the belt to slip or something. The belt is tightened properly, but the boot’s brush still had enough rigidity to resist the downward movement.

I had a dust boot that moves with Z and the brushes would foul doing deep pockets causing me to loose Z zero. I switched to the Suckit which is a fixed height dust boot and the issues went away. Doesn’t seem like soft brushes would cause that issue, but it can.

Thanks Dan, glad it’s not just me. I got the SuckIt on the way but they’re 25days out… figured I’d print one for now as I was excited to get started asap.