Just got my 60deg V-Bit from carbide and tested it with Carbide Create. All works great. Carbide Create generated GCode that uses several depth passes to carve the letters. I would like to use Fusion 360 to generate the paths and GCode for V carving but are running into a few issues.

1_Fusion 360 doesn’t have a tool called V-bit cutter. I’ve been able to find one that works when I call the engrave path function. It’s called a chamfer mill. Is this right?. These are my current settings. 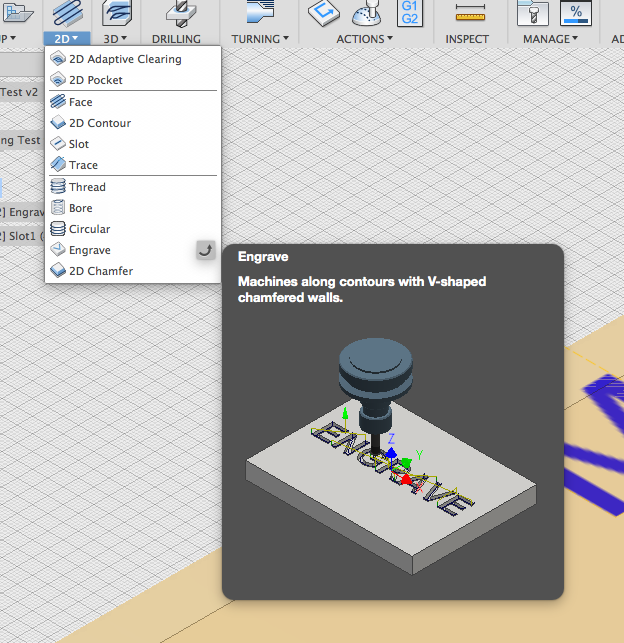 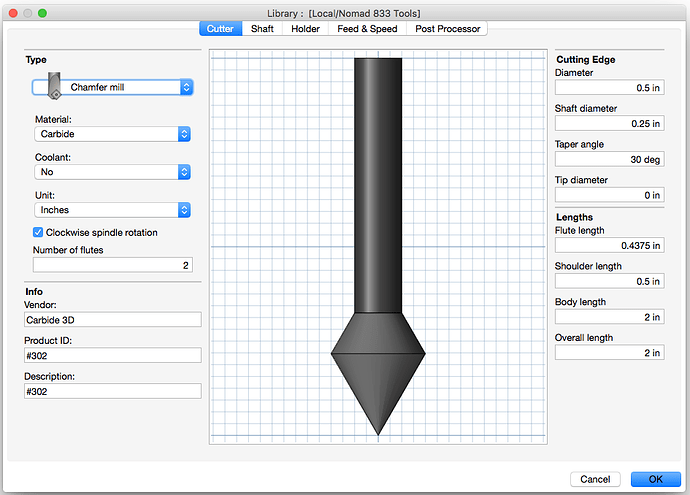 Make sense?. I’ve been able to control the depth of the groove by using this offset value in the engrave path settings

The path this generates is a single depth pass. Would love to be able to do multiple depth passes to make things easier on my machine.

Anyone has had any experience with engraving with Fusion 360 that can help me with the setup. Thanks.

Select all of the Engrave operations and click Simulate. If it looks good, then select all of them again and hit Post Process. The operations will be added to the output file in the order that they are displayed in the Setup list.

The chamfer mill is correct. Just make sure when you set up the tool, that you do not set the tip diameter at 0; make it something like .0001 in. When you set it to zero, it messes up on making the engraving paths.

I don’t know of any way to do multiple passes unless you try doing a separate setup for a second pass and just vary the bottom height. Would be easiest to right click on the current setup, select duplicate. Then go to your engrave operation in the second setup and select a lower bottom height from the heights tab.

Let me know how that goes…though your SO3 or Nomad should be able to handle 0.155".

Thank you for your comments and ideas. Will test tomorrow.

Did you find an answer? I was doing this today and there was a option for multiple depths on the second to last tab. Just like normal milling.

My issue with using Fusion for engraving is that it doesn’t do well with most fonts. Specifically script fonts. Let me know if you find a particular font that works well in fusion.