I want to use my standard-size Shapeoko to cut out a zero-clearance insert for my table saw. I am doing the design (or at least attempting to) in Fusion 360.

My challenge is around the dimensions of the insert–it’s a big one at about 16.25" long. Obviously, that won’t work cutting it straight left-right or up-down on the 16"x16" Shapeoko. However, if I can hold my stock at a 45 degree angle, then I have a lot more room to cut. The design in Fusion360 looks like this: 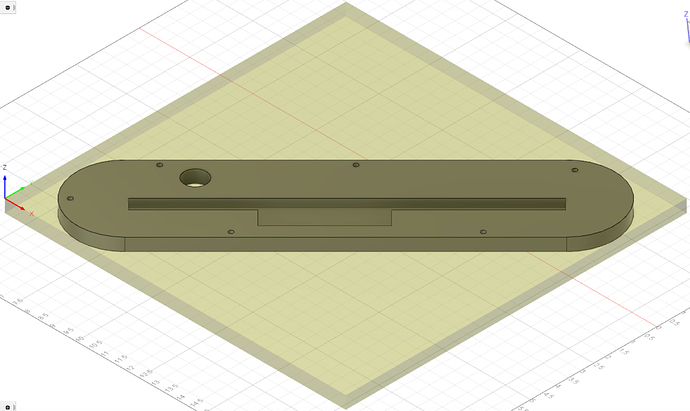 Now, I am not using a completely square piece of stock, despite what the graphic shows. To avoid a lot of waste, I cut a rectangular piece of MDF a little wider and a little longer than I actually need it to be. My zero point in my first attempt was in the lower left. Setting the zero is a bit challenging since edge of the stock isn’t really parallel to either side of the waste board–it’s at an angle (hopefully you can visualize this) and the zero point is over “air” not over the stock. On my first attempt I was just a bit off and the radius at far end of the insert got cut off “flat” rather than being the full curve you see.

My question is whether the center of the stock can be set up in Fusion360 as the “zero point” in terms of the g-code generated. I was hoping I could determine the center of the stock, and zero my Shapeoko at that point. This would ensure that I didn’t have the piece slightly mis-oriented where I would be “machining air” by accident.

In Fusion 360, I see a place in the machine setup where I can set the WCS and I have managed to move origin to the center of the stock. However, I have no confidence that the generated g-code will actually work from the middle of the stock. A quick look in ncviewer when I tried this appeared like the tool was still coming from the lower-left point.

Is having the center of the stock as the zero point even possible in Fusion 360 and Shapeoko?

Obviously, the right solution is to get a larger Shapeoko so one doesn’t have to try this sort of workaround, but there are budget and shop space constraints.

I appreciate any insight and wisdom.

Re-generate the toolpaths and the G-code should be referenced to that new zero point. I do it all the time.

What you pointed out in Fusion 360 is exactly where I thought I might be able to configure this approach. You’ve given me the confidence to try it without worrying that I’ll cause the Shapeoko to hit a limit in one direction or otherwise go haywire. Thanks!

This doesn’t answer the question you asked, but it might be helpful. Often when I’m cutting irregular objects on irregular/scrap wood, I’ll rout the outline into the spoil board just deep enough to be able to see it. Then I’ll mount the stock so it fits over that outline. I find it easier than trying to guess the orientation of the stock.

And the finished product, zeroed in the center, was a success… 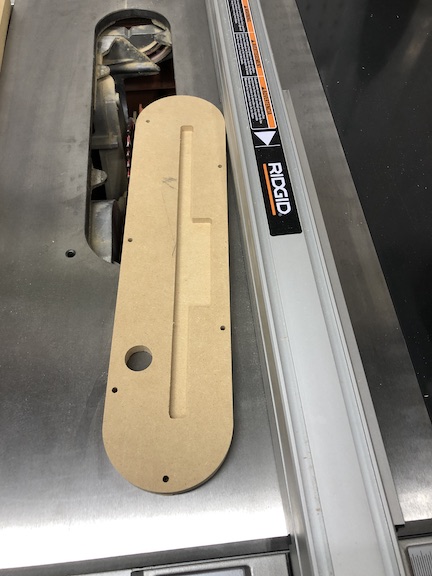 Thanks for the assistance!

If you’re ever uncertain of what the machine’s going to do in a case like this, you have two powerful tools to help you out:

First, Fusion has a built-in simulator that will play the toolpaths for you in something like real time. It can take a little tweaking to make the simulation result useful, but in 90% of my cases the thing I shoot for is a good simulation before taking the toolpaths to a real machine. Note that this won’t simulate anything that your post-processor will add to the gcode, but in the case of the C3D posts I’ve never noticed any differences.

Second, you can just zero the machine on your stock, then take the stock away before running the gcode. Let the machine cut air while you observe; a few minutes’ check should be good enough to give you confidence that what you configured in Fusion is what will happen when you are cutting for real.

In any case, glad you got the insert done. Looks great!

Thanks for the additional tips. I am a hack (at best) with Fusion 360. I have used its simulation capabilities a good bit, but am always apprehensive about not setting one of Fusion 360’s many parameters correctly and having things not work well on the actual machine. Removing the stock from the machine and letting it cut air as a test is a good idea.