In my other post I was working on milling out a rectangular pocket. When I set up the pocket, I turned on finishing passes and had it make a 0.007” finishing pass on each stepdown. This worked great. The pocket was within a thou of the desired size and the finish looked great.

The problem was that doing a finish pass on each step down was adding a lot of time so I thought I would try turning off the finishing passes, setting some ‘stock to leave’ and then finish the entire wall with a separate contour operation.

Everything seemed to work great, the pocket machined nicely and the full depth finishing contour passes made the pocket look great. The problem was that the pocket dimension was off considerably.

Then the finishing contour passes that I thought would take 0.007” per side off only tool 0.007” overall off so the pocket after the final finishing operation is still 0.021” undersized.

How does the simulation look in F360, does the final finishing pass reveal the color of the model? (it may be different on your computer, on mine the stock is green, and when it gets to the model edges/surfaces, they show up as blue)

If the simulation is ok but the cut isn’t, you could try and check if your endmill is not actually smaller in diameter than you think it is (0.007" smaller than rated…it’s a large value but not unheard of)

Another check would be to load the generated G-code in e.g. ncviewer.com, and inspect whether the toolpath really does as far out as you think it does: if does not, then you know for a fact that it’s a problem in the F360 settings, not in the cut/tool.

The other thing could be deflection…but considering your pocket is roughed the same way as you did earlier, probably not.

Since the numbers add up so perfectly, I would tend to think it’s in the F360 settings somewhere, but I can’t think of the reason. Maybe upload your G-code file and share a link to your F360 project ?

It does look like it is leaving material after everything is done, but I can’t tell how much.

I had a thought that maybe there is a bug. I originally had a finishing pass that took 0.007” on each stepdown, I turned that off by unchecking the box, but I never zeroed out the field. I wouldn’t think that it would matter because the field disappears when you uncheck the box, but maybe Fusion is leaving that 0.007” per side and then when I turned on stock to leave of 0.007” it is keeping even more material. The original per stepdown finishing pass + the stock to leave would be 0.014” per side or 0.028” under which matches up to what I am seeing.

I will double check the endmill, but like you said, I used the same tool to make the pocket the other way and the dimensions were nearly perfect.

If you can see the extra material in the simulation, try re-generating all the toolpaths in the setup and check again ? F360 normally regenerates toolpaths as appropriate, but you never know…

Comparison is a great way in the simulation environment to see how much stock is left. You can adjust the tolerance value up and down and the color of the model will change. This is a really handy for complex 3d work as well. 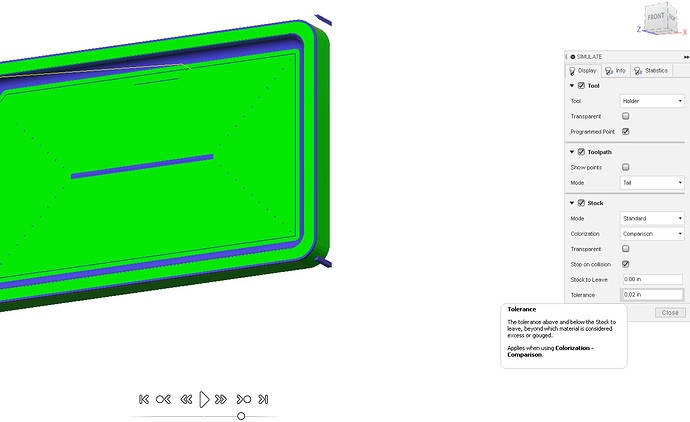 Well as much as I hate to admit it, regenerating the operations individually took care of the issue. Not sure why it would matter because every time a small change is made and you click OK, it automatically regenerates and I almost always click generate on the main process name which I thought regenerates all of the operations under it.

I checked out NCViewer and it is a super slick application but wasn’t able to really see what was really going on.

I ended up changing the stock to leave to different negative numbers to see when the model colors started showing through the stock colors. I will have to check out the comparison feature… it looks pretty handy

Thanks all for putting up with these questions while I figure out how to make Fusion do what I want it to do.

I checked out NCViewer and it is a super slick application but wasn’t able to really see what was really going on.

Beyond “just” visualizing the toolpaths to double-check they look as you would expect, the killer feature for me in ncviewer is the ability to click somewhere on the toolpaths, at any extremity of a line segment, see little gray dot there: 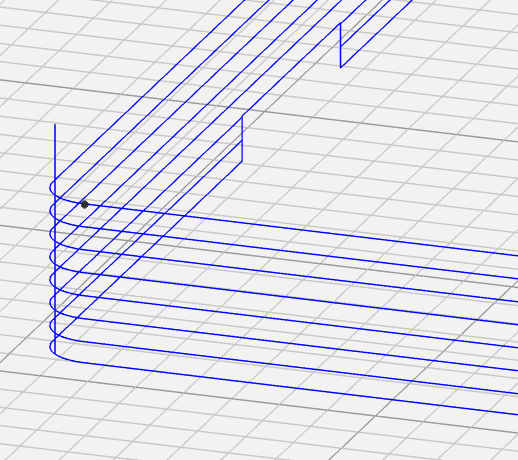 and when you do, it will position move the cutter to that position in the toolpath and then, and this is the killer feature, highlight the corresponding G-code line on the left pane: 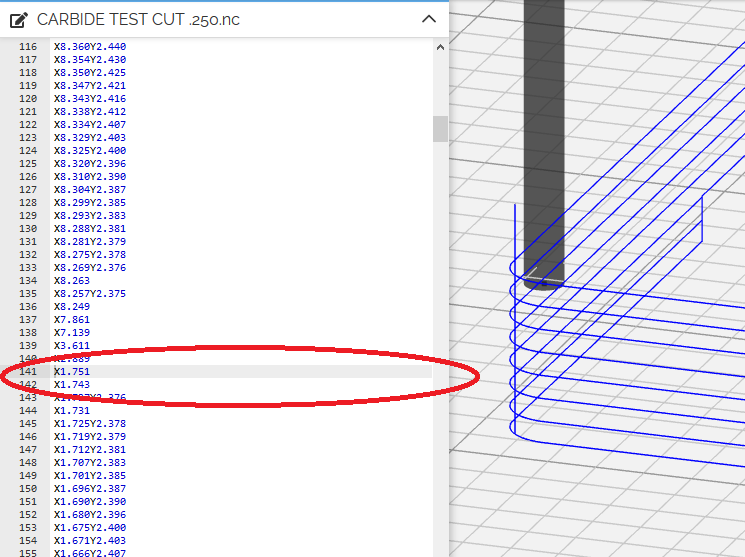 Conversely, clicking on any line in the left pane brings the cutter to the corresponding location in the 3D view.

Admittedly, this is only useful if you are comfortable with reading a little G-code, but for troubleshooting weirdness such as unexpected distance between two passes, it’s quite handy.