I have been plagued with my XXL randomly gaining Z depth during the job. Rechecking my 0 above the workpiece after a failure usually shows the axis off (too deep) by .5mm or more (20 thou). I mostly cut HIPS styrene and this results in the melting of the plastic as my DOC gets way to deep. This results in a nasty hazard as the blob of plastic accumulated around the endmill either flies across the room, or destroys parts of my dust boot.

When things are working well, my cuts are awesome (creating nice chips, zero melted edges, and can go through numerous jobs without an issue). So I am pretty confident in my feeds and speeds. The issue seems to just start out of the blue.

I am a bit confused because losing steps would mean I would start cutting too high right? Like if my Z belt was slipping, that would cause the endmill to be higher than the job thinks it actually is. So what would cause it to “gain” depth? I am just not sure what to check.

Is it a fresh bit? I mean to say, if the bit is getting dull it would create more rubbing (friction) and heat. Do you have another bit to try? Another thing to check would be pulley set screws, they could start to wear at the tips even if they were once tight and cause some slipping one way or the other. Third thing I would check is the actual bit slipping in the collet, maybe put a mark with a Sharpie where it meets the collet and see if it’s moved after a run, another way to check this would be with a dab of white out between the collet and the bit(poor mans torque seal) you’d definitely see if there’s movement there as the white out will crack and shift. Those are the first things that come to mind.

In addition to @DanoInTx’s excellent advice please consider the possibility that the belt tension is not sufficient — it needs to be guitar string tight — if too loose it can get pulled into a cut, which is cumulative. What is your safety/retract height set to? You’re not bumping up into that or anything else?

I would also suggest considering an endmill which you could run more towards the middle of the sweet spot in terms of feeds and speeds a single flute endmill optimized for plastics if possible.

Thanks Dan. I will definitely try your tricks with marking the bit, good idea. In my case I guess the issue would be the bit is working its downward though, not upward, which would be unusual. I have not touched touched the collet in 2 or 3 weeks and if you added up all the times I have lost 0, it would have fallen out by now. But maybe its going up and down.

I will also try another bit tonight. Though this one only has about 3 hours of cutting styrene only on it. Not sure what the life on the onsrud bits are.

FWW - I’d put a mark on the pulley and the belt to the pulley. My first guess is the Z belt is skipping. With a mark on the belt and pulley you can confirm it. I’d use the whiteout method. If skipping is confirmed, as @WillAdams said, work on tightening, belts can take a lot more tension that you would think.

Thanks Will. Actually I am already using a single flute. This one which is made for plastics specifically.

I will focus on more belt tension as Bee mentions. I tightened it last week, but I was concerned with over tightening. I will go for guitar string tight this time. Although I still don’t understand how a loose belt would contribute to the

I have read about the trick of tightening by letting the weight of the shapeoko pull down, but easier said than done on an XXL

@WillAdams You do have me wondering about retract heights. I use Fusion 360 CAM, and my latest incident involved the 3rd of 3 operations I chained together into 1 gcode file (by selecting all 3 to post process)

My highest height is the one between the operations, which shows as 0.6in. In the screenshot you can see endmill has just come out of the 2nd op and is on the way to the 3rd one. That last op is where I had the issue. or at least where it started manifesting itself as buildup of melted plastic on the bit.

So one thing I notice is that when the steppers are on (locked), I can grab the spindle and with moderate effort (maybe 20lbs of pressure) lift up, I can move the axis up semi-smoothly. This movement is more than just flex in the belt, the carriage is traveling up and staying there. At first I thought I was causing the belt to slip on the Z stepper. But on closer inspection I am causing the Fixed Pulley (shown below) to turn. The Z stepper and belt stay in perfect alignment the whole time, as proven by a white alignment mark as Dan/Bee suggested. If I push up hard enough, a violent shift happens. I assuming I am slipping teeth on the Fixed Pulley.

Should the Fixed Pulley be able to turn at all? Or is all this just a matter of tightening the belt more? Trying to decide if I should dismantle the Z and inspect the pulley closer. 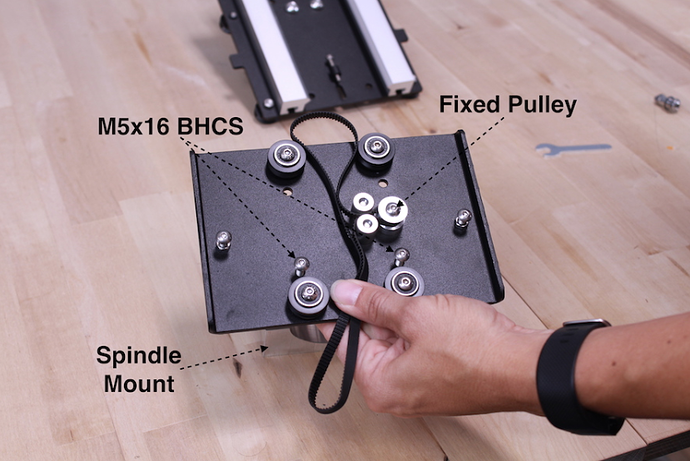 The fixed pulley really shouldn’t turn, but what really matters is if those two static posts right next to it are tight and the belt teeth as they pass through there are engaged with each other. I know some folks reported having set screws in that fixed pulley and some without, but if the belt teeth are locked into each other it shouldn’t matter much imho. It’s all really just a bunch of hardware that locks the belt. If you’re going in there anyway you might check on the condition of the Z belt. I rotate mine around a bit anytime I have it off so I have fresh teeth on the stepper pulley (might make no difference, but it makes me happy, haha!).

Great info Dan, thanks. Question about removing the Z carriage, something I have never done. I guess the only way to do it is to slide it off the end of the Y extrusion, like it was installed? Just making sure ther isn’t an easier way to get acces to inside the carriage. I hate to loose all my calibration of the X/Y.

I was having the same problem. Turns out that my v wheels on the z axis were too tight and getting stuck in dust buildup on the z rails. I loosened them just enough so I can’t turn them with my finger and this solved my problem

You can slide it off the bottom of the assembly with a little care, without loosening anything, but depending on your exact router position, you may need to remove the router - you DON’T need to take the rail off. Move the carriage all the way forward, release the springs, remove the router, take the belt off the stepper, and it’ll slide right off. Pretty much however you do it, you’ll need to redo your Z calibration because you will need to release and reset the belt tension.

I had that issue as well with repeat runs. I found that when the run completed the head raises and goes to the back of the machine, not to home. If I re-run the same program, it seems to cut deeper. Now I always send the machine home after the cut. I haven’t had any problems since. It should have an option to send home after cutting.

Thanks @mikep. Sliding the gantry all the forward was the ticket. I was able to drop the Z plate down in front.

So I think I found the likely culprit to the issue (will need a few job runs to tell for sure). After taking the Z carriage off and inspecting all screws, I found that both the Idlers that pinch the belt in front of the Fixed Pulley were very loose, causing the Idlers to not sit perpendicular to the carriage plate. This was causing the teeth in the belt to not engage with itself very well.

Also the bolt holding the Fixed Pulley was loose enough to allow the belt to slip through with enough force. After tightening all screws, I could no longer physically pull the belt through that part of the assembly.

I hope that solves the issue! Thanks for all the great tips guys.

Also forgot to mention I found that I was able to tighten the set screws on the Z stepper gear more. Crazy the whole thing had just not fallen apart