@lorenolepi was using VNC to try and control via remote. The web interface seems to work better than VNC/RDP. Not saying it’s better than using the app directly, but it is better than via remote desktop, at least for me.

Sorry Mike, I understand now, I totally missed what you were saying. I thought you were asking if the web interface made the 10 key work, I didn’t understand that you were saying use the web interface on a different tablet to remote jog, my bad:disappointed: I actually have a Win10 tablet I could try as a stop gap until CM4 comes up to speed or I can figure out how to roll back to CM3 Grbl 0.9. Thanks for the idea, and again sorry for the misunderstanding.

I was wondering if i was the only one experiencing this. 9 times of 10 when i start a program nothing happens. I then need to hit stop and wait for machine to slowly home. Then i can rapid back to the work home, and hit start and the program will run!? any one else having this issue?

Have you sent an email to Beta?

I also recommend that you talk about your setup, because there are so many variables.

yea i sent an email to them, Im on a macbook pro os x 10.11.6 and cm 4.0.407. I was wondering because it was working perfect for me also till the last update. But i also have had the name being wrong on the load page and correct on the run page. I thought that was fixed on the last update. Maybe it is the post I’m using from v-carve. Ill try a different post for a while and see if it continues.
Thanks

I am having issues installing 1.1 on my 883 Pro. After detecting the machine and confirming that GRBL 0.9 is installed, the program complains that the z-axis limit switch is not pressed down (even though I am holding it down) and refuses to proceed. To humor myself, I tried holding down the y and tool length sensor limit switches (just in case), but no go.

Anyone experiences this? I emailed beta (twice) and carbide support after: for some reason no-one is replying…

Where on this control board would you wire the PWN and Ground wires too. It is not as straight forward as the previous control board or I am simply missing it with my old eyes.

Suggest providing you board version # in a query to support@carbide3d.com

Thanks for the advice. I did just what you suggested

Same spot as the white board, there are 6 pads on the right side of the board below the cap. Mine is a 2.3 or 2.4 board (can’t remember) Yours is marked 2.3 (lower left corner). On my board, it matches the white board below. I’ve got a year old nomad pro, and a shapeoko 3 xl, and that set of pads seems to be the same on both, and matches this white board, at least in this spot. On the nomad, the spindle controller plugs in there. There’s a handy PWM and GND there. (Keep in mind, I don’t work for Carbide3D, they’re the ultimate authority here) 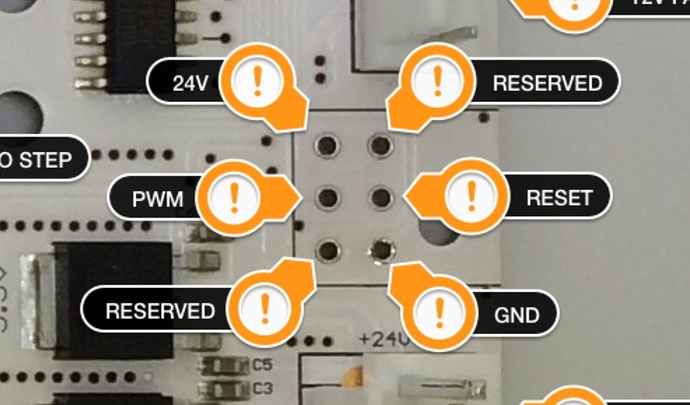 Turns out with this post for v-carve (that i had modified to include tool data, time, file name, ect…) that i have to start at the work zero. With post from fusion i always just started from wherever it was.
So this was in no way a CM problem.
Thanks

Carbide motion 4 loads
I click on settings and set the dropdown to shapeoko XL
there is no homing button available on the pc or the Mac.

if I click on jog, the machine goes into homing mode , sends the z axis down 1cm and requests me to close the door

very confusing
the machine is unusable

anyone had similar problems

There is no longer a homing button, correct.

I had a similar issue, and needed to reselect my machine to correct the wrong way Z.

I hope you sent an email too.

Yep sent one of those,
but being the weekend I don’t expect a reply until Monday
how did you resolve your issues and did you have the door open test come up

I test boards for Carbie3D so I have upgraded 3 times now, so I’m a little more familiar with the process (and errors) them most. As soon as I saw the Z move down (rather than up) I hit my estop, reconnected and went into settings, clicked on the log window (saw that Shapeoko 3 was selected), then I opened the MDI page, typed $$ and looked at the settings in the log window (mainly I was looking for $130-132 (machine size) and noticed that the machine TYPE didn’t take.

Went back into settings, reselected Shapeoko 3, and clicked Send. Typed $$ back at the MDI page, checked the setting, and saw that the setting were NOW correct.

THEN I clicked home machine, and it all works great, and have used the machine nearly everyday since then (3/22).

The signs you are posting clearly tell me that the wrong machine is inside GRBL, and it is easy to change. Now why didn’t it take the first time? I don’t know.

with the router turned off I switched on the machine ,run the program and let the machine go through its paces, after it finished it would let me go into jog mode .

No matter what buttons you click nothing happens apart from done