Went a little ambitious for Christmas. Thought I could draft a rubber band gun and get it to work the first time. Tried for a Semi automatic 6 shot RBG, what I got wasn’t too far off. No semi auto but the same mechanism works ok for single shots.

Took a bit longer than I wanted, Didn’t want to cut too deep all at once. Later tests I was able to double my depth per pass at 350mm feed rate but the burring was really bad on the wood.

Let me know if you see anything I could do different/better. This is my first real project with cnc. 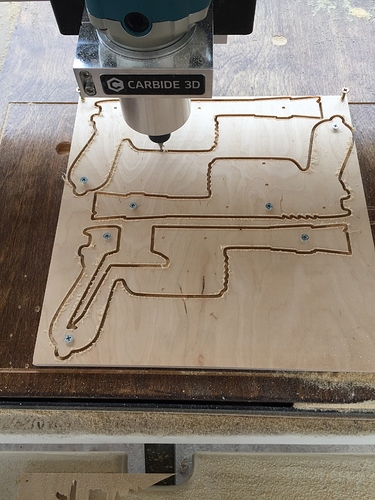 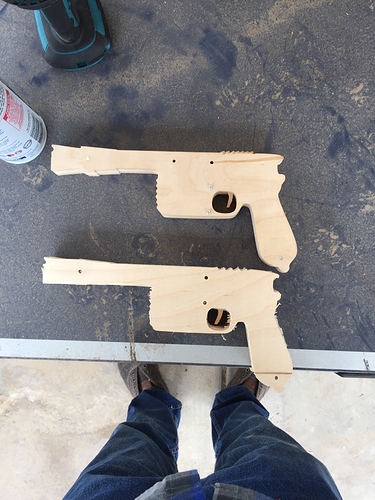 Looks like a fun little project. For cleaner cut edges, the common suggestion is to use downcut endmills. I’ll be testing that in the coming weeks myself…

Yeah, I had to do a bit of sanding to get them looking nice. I think my bit was getting dull as well. The first two cut pretty ok but the third one was rather furry. It was also a huge temperature difference. I had to move my work area outside to compensate for 5 hours of dust

. So outside temp was about 40 degrees. Dunno how much that would affect it.

Let me know how the downcut end-mills go, I’ve been interested in them but far to apprehensive to try anything new yet.