I found a source which worked out to be quite nice. My plan is to replace the original 3/4" MDF slats on my HDM with 1/2" HDPE. I don’t need them to be 3/4" since I’ll be using a 1/2" MDF spoil board on top of the slats so it’s fine if they are level with the aluminum extrusion t-tracks. I’ve built a jig I can use to cut holes for M6x10mm threaded inserts into the slats. My spoil board will have matching 8mm holes which I can use for dowels or for feed through access to the threaded inserts.

This will also give me the option of removing the MDF spoil board and installing aluminum fixture plates to machine metal and since the slats are HDPE they will be impervious to liquid coolants.

My ebay source cut them to precisely 74x701mm which is the exact dimensions of my original HDM slats, so I won’t need to cut them to size.

Here’s a video of my jig in action making a MDF slat. As you can see I have to machine it diagonally.
https://www.youtube.com/watch?v=h9CgK_5q79I

@BubbaOriley What is the advantage of using HDP vs. MDF for the slats?

What I have heard is they last longer, don’t warp, when you run a bit into them it does not flake apart like MDF.

Good luck. Hope to do that some day

There are some advantages and disadvantages. The biggest advantage is if you want to use any sort of liquid for cooling, it’s going to cause problems with MDF so you are better off with something that’s either impervious to liquids or highly resistant. I’ve seen people use phenolic material, which probably is superior to HDPE, but it’s more expensive. I haven’t used the HDPE yet, so I don’t know how well it’s going to work, but so far I’m pleased with the planks I received and I think they will do what I want. I have done some testing and I know HDPE will hold threaded inserts well. What I like to do with my slats is install an array of threaded inserts spaced every 50mm, but I never cut into my slats as I’m always using something on top of them. My spoilboard has 8mm holes which line up with the threaded inserts in the slats. That way I can either use those holes for dowels to give me a reference perfectly square to my spindle, or I can feed through them for threaded inserts. Since the spoilboard has no threaded inserts it becomes easier to replace and recreate.

If you don’t plan on using liquid for cooling, you are probably better off with MDF. If you occasionally cut into your slats you would want MDF as it’s cheaper to replace. If you only occasionally use liquid cooling you could always just remove your slats on those instances.

I got all the slats how I want them and installed. I learned a few things I’d do differently if I were to do this again.

For whatever reason, the slats on my HDM are exactly 701mm long. Since I started the first row of holes 25mm on centers from one end and spaced them 50mm apart, this means the last row is 26mm from the other end. Had I started at 25.5mm, they would have been symmetrical. It’s not a big deal because I had to skip one of the center 8mm holes since it would have interfered with one of the mounting holes. So it’s easy to tell which way they need to be oriented.

Here is my setup with a spoilboard. Eventually I’ll get some 1/2" MDF and make a spoilboard that covers the entire bed, but will be split into two pieces so I can machine all of it.

All of the holes in the spoilboard are 8mm. I can either feed a screw through them and access the 224 threaded inserts in the slats, or I can insert a dowel and use them as a parallel or perpendicular reference that’s perfectly aligned with my spindle and at known points.

Eventually I’ll get some fixture plates for machining aluminum and I’ll be able to remove the MDF spoilboard and attach the fixture plates without having to remove my slats since they are impervious to liquid cooling and slightly below the hybrid table extrusion t-slots. I think it’s a pretty slick system that will make the machine more versatile as far as using it for both wood and other materials. 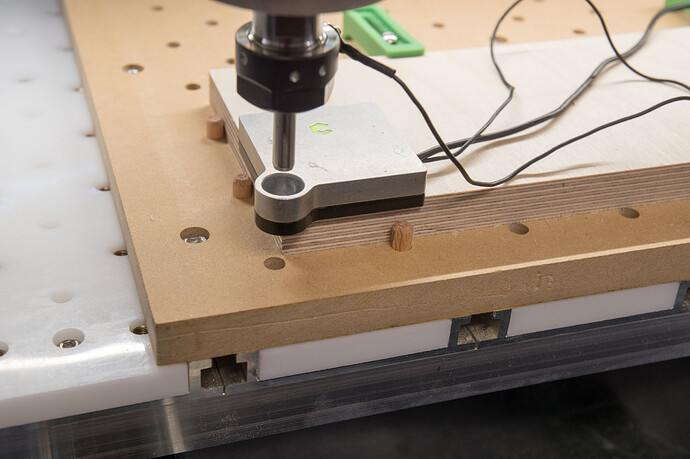 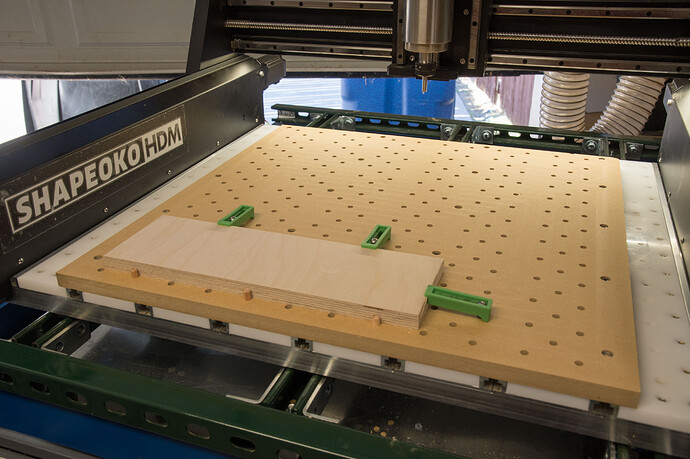 Covering the entire surface isn’t worth it IME, just use cauls/blocks under your stock/clamps as necessary to make up for the deficit when necessary.

I’ve already started doing just that. The spoilboard I’m using right now is just a piece of mdf I had on hand and it’s only 650mm wide while my usable X is 685mm. I’d also like to have reference on the spoilboard to the set of holes that are on the outside slats and are spaced 700mm apart on center. So if I had a spoilboard that was about 720mm wide or so that would be ideal, but for now the spoilboard I just made will be fine.