What are my options. I like the actual boot design of the suck it but I NEED something that does not reduce my travel at all. Are there any z independent options out there or am I making something for my self?

I’ve also looked and I’ve not found anything which didn’t reduce the X travel, but it’s a small reduction on some. I looked at the PWNCNC and that seems to move the home switch and implement an X travel reduction but it may not be as large as the big ears on the suckit.

I presently have a 3D printed prototype which is attached to the spindle whilst I think about how to make a Z independent version in the tiny gaps around the sides of the HDZ.

This is easy enough to slide up and down the spindle for different bits, the clear PVC curtain isn’t really thick enough and gets sucked inwards, but is cheap and easy to replace when it gets chewed and I can actually see what I’m cutting.

Oh, and it looks like a badly 3D printed elephant trunk 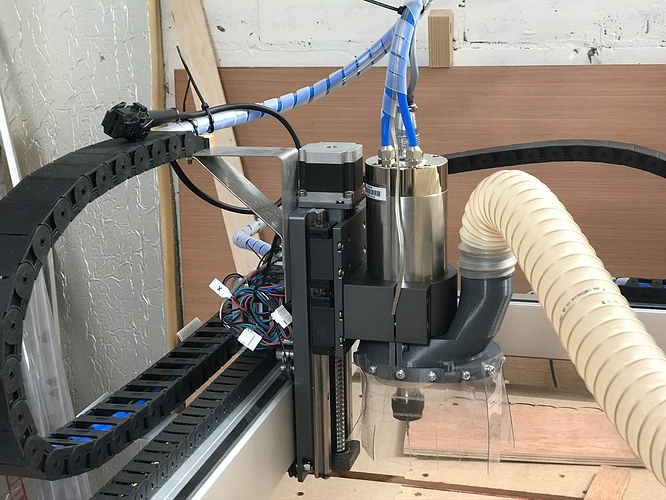 That looks doable. Was trying to go z independent this time to see if it works well for me.

Btw my thread about my disconnects got closed. I got the tablet in today. It works off the tablet as long as it’s in plugged. If you plug it in you quickly get a disconnect. I give up going to use the tablet and plug it in in between jobs.

That looks doable. Was trying to go z independent this time to see if it works well for me.

Yep, I’d prefer to go Z independent too, I’m using that prototype as I’m learning what’s good and bad about it. I’d prefer to be able to buy / build a PWNCNC type extractor which gave a good clear view of the work and cutter.

Btw my thread about my disconnects got closed. I got the tablet in today. It works off the tablet as long as it’s in plugged. If you plug it in you quickly get a disconnect. I give up going to use the tablet and plug it in in between jobs.

You can ask WIll or Julien to unlock the thread I believe.

Still don’t understand where your interference is coming from, it does seem to be a big pickup of noise from the VFD in your ground connections causing enough noise between the two ends of the USB to interfere with the comms signal.

Have you looked in your local environment for something making noise. A few years ago I went to a customer that did geophysical work at an oil company. They had a very large and expensive tube monitor that looked like it was setting on jello. I moved the computer and monitor over a few feet and the problem went away. It turned out that a cable chase was directly behind the customer’s desk. The cables were interfering with the monitor. I also had a customer at a school district office that had her monitor distorting. When I got there the lady had an oscillating fan sitting next to her monitor. Every time the fan ran in one direction the monitor would distort. You would have thought that the lady would have had a clue but she did not. I moved the fan a few feet away problem solved.

The point of the two stores above is you may have something in the wall, attic or basement close by that is causing the interference. When my Bosch heat pump runs in air conditioning mode and my patio AM radio is on there is extreme interference when the unit is running. So many times there are hidden interference issues that have to found by a process of elimination.

I have spent a month or two ruling things out. Re routing wires changing mounting locations of everything on the enclosure, building faraday cages around components, multiple computers, multiple vfd and spindles…

I give up. I’ll run a tablet off it’s battery to run control it.

I presently have a 3D printed prototype which is attached to the spindle whilst I think about how to make a Z independent version in the tiny gaps around the sides of the HDZ.

In case you are looking for some inspiration, here is what I came up with for a Z-independent, full X travel dust shoe support:

It turned out that the previous frame was too bulky for comfort, especially near the bottom where it was really not convenient when changing tools. So I went back to Fusion and designed a Mk2 version with a lot more clearance at the bottom: [HDZ_frame_mk2] In the process I learned a thing or two about what NOT to do while editing a complex sequence of sketches and 3D operations in Fusion, to go from the original design to this. Now the frame is nowhere in the way of the spindle collet nut: […

The trick for me was finding how to attach something at the bottom (rear) of the HDZ, no easy options there. This solution I came out with is enclosing the lower V-wheels, and using captive nuts and two bolts that come and center themselves in the lower HDZ bolts’ heads in the back. If that makes any sense.

The other trick was designing the lower part such that it clears the Y rails when reaching the extreme left/right positions: 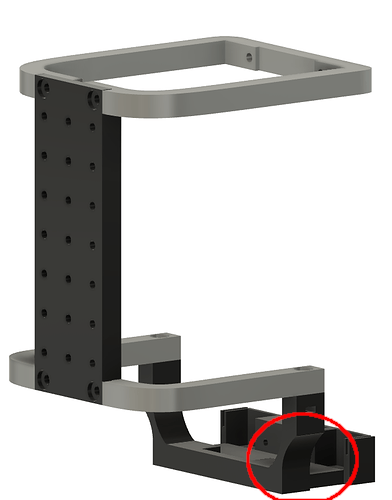 Then I added this custom dust shoe onto that frame. 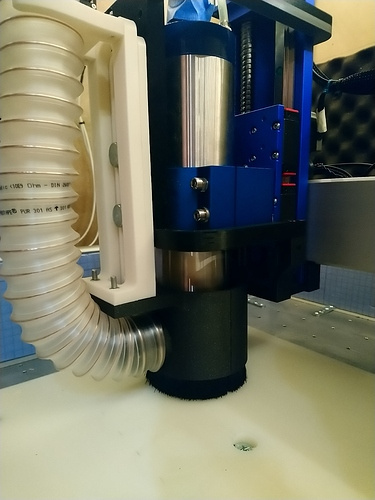 The full X travel is what made cutting right to the edges of that piece possible: (44.5cm wide) 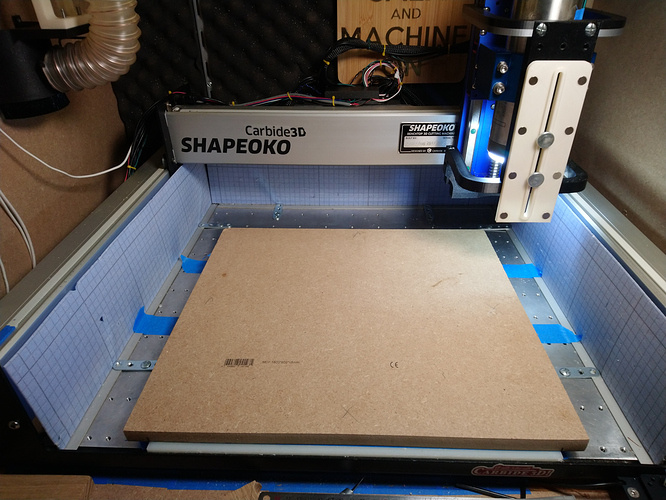 I’ve been pretty happy with how this works, but it does look a little bulky so I’m waiting for someone with industrial design skills to come up with a better version of that concept, or a different way to attach a Z-independent shoe to an HDZ altogether.