In my recent pocketing operations, the z-depth is varying a lot over the course of the cut. Instead of a flat bottomed pocket I get a series of stripes that vary by as much as 0.02". On some strokes it looks like it’s plunging a ramp and then coming back up when it changes direction. It doesn’t look like tramming issue to me because it doesn’t vary in a consistent direction, depth, or angle.

Any ideas why it would be varying so much? Some of the gouges are too deep for me to sand out. See pics for how much it’s varying.

There’s no play in my v-wheels that I can discern. 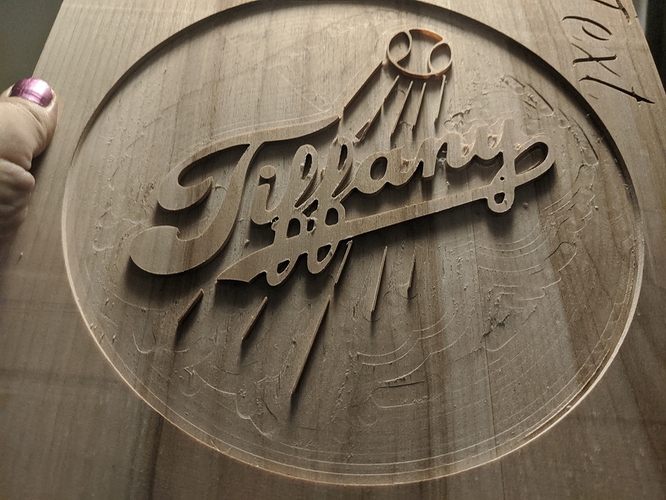 Is you spindle trammed properly? Here are some tips to reduce markings. Leaving a small allowance at the bottom for a finishing pass say 0.02in to clean-up is also a good strategy. It also looks like you have a fairly large width of cut, on your last pass, maybe reduce that to 10% of your endmill, it will take longer but should make it fairly smooth.

I would also consider the possibility that your router bit slipped a little or you lost a step or two after the carving began. Taking a smaller depth of cut will help deflection as @luc.onthego mentioned as well as lost steps, but I would also check your bit after finishing a carve to see if your Z zero has dropped due to a loose bit or lost steps.

I think a slipping bit is more likely than tramming issues. The depth seems to go up and down randomly and sometimes suddenly, which doesn’t seem like a tram angle.

I’ve also had trouble with bits slipping in my cordless Makita trim router, which uses the same collet. It doesn’t seem like it should be hard to get the bit to stay but at least in that other router, my 1/4" bits slip no matter how hard I tighten down the collet nut. Maybe the same is happening on the router in my shapeoko.

I’ve had a few slipping bits but I have not seen it go back in, always out. A precision collet holds the bit better than the Makita collet. If there is chatter, you may want to use two wrenches instead of the button to ensure the collet is tight.

The two biggest culprits I’ve found when suffering the same problem are the belt pulley on the Z-axis motor is slipping on its shaft, or the Z-axis belt is loose.

An easy way to diagnose is to turn the machine on with router OFF, home it etc, then bring it to the front of the work area and try and move the Z-axis up and down, it should be quite difficult to move, and when it does, it should be the stepper motor stalling, not any movement anywhere else. This is also a good check for X & Y Axis.

if it is the pulley slipping on the shaft, make sure the little grub screw in the pulley is sitting on the flat on the stepper shaft, and loctited snug

I had this recently and in my case 2 of the V wheels had come lose due to an earlier, ehm, accident I caused.

This happened to me when I was using a dust shoe that was attached to the router. When the bristles touched the work surface, they would lift the router. As the router moved around, the bristles would bend over and allow the bit to go back down.

When the router changes directions, the bristles would push the router back up until they bent over the other way.