Hi guys,
Hoping to get a little advice on the best way to level my pro xl. I initially built my machine on my garage floor which i suspect isn’t anything close to level as i didn’t have a suitable table yet . I’ve since moved my machine to a really solid table which I adjusted to ensure levelness with the floor but i’m having a bit of a problem. The back horizontal support of the hybrid table is sitting pretty much flush with the table, the middle is raised slightly on the right hand side and front is sitting about 1/8’ off the table. When i move the gantry to the front , the machine actually pitches forward . I’ve put a couple of metal shims under the high spots which seems to be doing the trick but i wouldn’t mind trying to get it sitting flush with my table if i can. Are there any tips or tricks i can use to do this without having to disassemble and reassemble everything?

The most expedient thing to do is to get a sheet of foam to put in-between the machine and the table — in addition to taking out the unevenness between the table and the machine it will deaden and dampen noise and vibration.

If he assembled on an uneven surface, then moved to a leveled area… Should he loosen the screws on the machine, I mean all of them. Retighten on the level surface to see what that accomplishes.

If you check your horizontal supports from the bottom, everyone has holes there. I used these holes for leveling legs because I had exactly the same issue. I ordered the legs, cut threads, and the job was done. It’s working perfectly. The legs are rated at 30kg each. 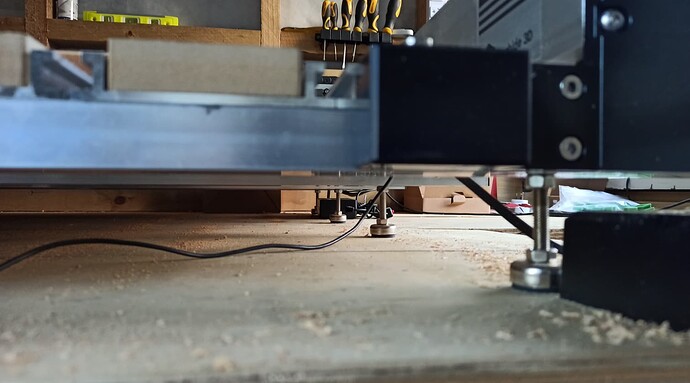 If he assembled on an uneven surface, then moved to a leveled area… Should he loosen the screws on the machine, I mean all of them. Retighten on the level surface to see what that accomplishes.

That’s an interesting point — in theory the machine would pull itself square as the hardware is tightened — agree that if the machine itself is not square then yes, the hardware should be loosened, things adjusted to bring things into square, then the hardware tightened to as to secure things as to be square.

I never thought of using leveling legs, that’s a really good idea. I think i might try loosing as many screws as i can and retighten as Zman suggested and see if that helps first.

I am lucky to have my machine on a flat surface. Using leveling legs as you pictured might cause the unit to sag in the middle. (did not look at mine to see if it was possible to install legs across the middle) I have heard of people using high-density foam under the bed to limit sound as well as provide support.

To sag in the middle? I don’t know how it could happen because all weight of the machine itself is on the sites where the legs are. So just material on your table could cause bending in the middle of the table. But I am lazy to count how many kg you would have to load there. 2-3kg, which usually can have a big piece of wood, can’t bend your machine. If someone has worries, they can still put more legs into the middle.