Although I have reading a lot of posts on this forum and learning a great deal of things, this is my first post. I am patiently (or rather impatiently waiting) for my Nomad Pro to be shipped, I have been getting ready by making some machinable wax. As you other Canadians know, our dollar really sucks against the u.s. Dollar and I can’t see myself buying machinable wax in the U.S. (No offense intended to Carbide folks). I just wanted to share with you the results of my first attempt at making this stuff. Just remember I don’t have a nomad yet to be able to machine this yet, so here is a few pictures after taking them out of the mold. 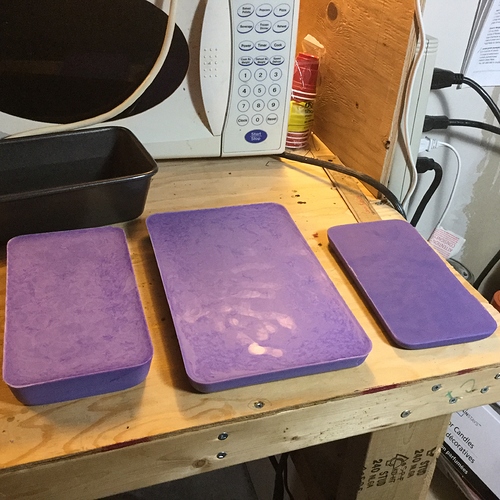 And here is my setup of my fume hood. There is a powerful furnace fan that sucks the fumes outside. 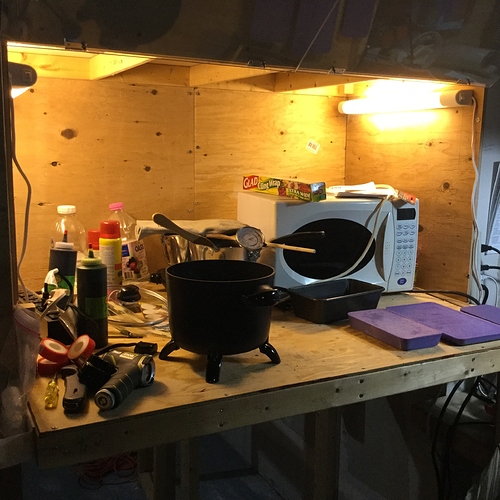 I also use this fume hood to cook plastisol to make soft fishing baits. This plastisol, once cooked is poured into aluminum molds. This is what eventually I will be doing with my Nomad Pro once I learn how to use it.

That is all for now, I will be leaning heavily on this site for help…

A fume hood. And I thought my little Nomad-ventilating rig was a nice air-quality setup.

If you don’t mind sharing, what recipe are you using for your machinable wax? I’ve only run across one so far on the net, and it frankly involved temperatures and materials I was less than eager to mess with.

So, are you planning to machine your bait molds in aluminum, and then pour the Plastisol (never heard of that before) into them?__

We have a bit on machinable wax on the ShapeOko wiki: http://www.shapeoko.com/wiki/index.php/Materials#Machinable_Wax

This is the recipe I am using. Although I have found many on the net, they all seem to be about the same.

So, are you planning to machine your bait molds in aluminum, and then pour the Plastisol (never heard of that before) into them?__

That’s right. Plastisol is cooked at 350deg F and dye, scents and glitter are added to the mixture before pouring. Plastisol is really another kind of soft plastic that make those soft baits you see everywhere. It even can be re-melted and used again.

The other thing I am planning to do is to make some Musky lures out of wood.

The other thing I am planning to do is to make some Musky lures out of wood.

Remember that wood is a friable material; the particles generated by machining are hazardous to your health. Please see:

Potential Health Effects of CNC and Machining How To

I ordered the Nomad 883 and I live in a small dorm room on campus. I would like to have it in my room so I can use it whenever I want and keeping an eye on it in case anything goes wrong. However, I am not sure if there is any potential health hazard linked to having it in my room. I am concerned about the dust and powder produced. I understand that wood, fiberglass and other materials alike produce fine dust during machining, so I am not considering machining those in my room. But I wonder if…

and other related topics.

Neat material! Had to look it up.

This is why I will not be cutting into wood until the festool is in with the dust deputy. Not playing around with my lungs.

The people who wrote that wax recipe must have been British. In America, we say “polyethylene”, not “polythene”. But the important thing to note is that there are two basic types: HDPE (High Density PolyEthylene) and LDPE (Low Density PolyEthylene). Both are used to make plastic bags, but only the LDPE will melt into your wax. You can melt the bags if you want (use the ones that you bag your produce in, not the ones they give you at check-out). But LDPE also comes as pellets, which take up less room for the weight.

You should use an electric melting kettle, and be very careful, since you need to take this stuff up to a very high temperature for the LDPE to melt, just short of the flash point (where it turns into a towering inferno). Don’t turn your back on it, and have the lid ready to cover the pot if it starts to burn. Be especially careful once you’ve emptied the pot, since the fumes and residues tend to ignite then - it’s usually safest not to empty it entirely.

Actually, you can use HDPE although the temperature must be higher than using LDPE. The flashpoint of wax is 300 deg Celcius, when melting, my temperature never gets above 180 deg Celcius. I have tried HDPE, but i could not get the temperature high enough with my pot. I ended up using ziplock freezer bags and it worked beautifully.