Horses in a frame 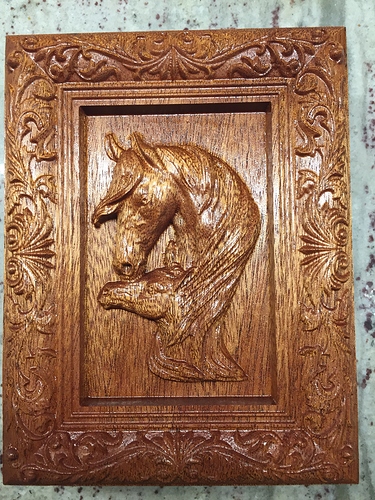 I like your subject matter, very nice. Could you share your process, like is it original art or did you get the images from google, etsy etc…

I’m a member of a paid group called “Club A” on Facebook run by Vitalie Diaconu. You can see over 700 models at http://www.club-a-models.com/index.html

The models come in STL format they’re so not supported by Carbide Create. I used V Carve Pro but the cheaper Desktop version would have worked too. I imported the model, generated the tool paths and then cut it with UGS. I’d installed a HDZ this year before Luke joined C3D so Carbide Motion didn’t support the HDZ at that time so I went to UGS.

My process on the Horses was different because I combined 2 of the models (horses and frame) to make the carving. I could have done that easily with Aspire but would have had to pay $1300 to upgrade my V Carve Pro license. I’m retired so that’s out for now. The V Carve Pro I have now limits me to import 1 stl model in a job.

So I looked at Open Source alternatives to edit and merge meshes (stl files) and discovered Blender. It’s AWESOME but takes significant time to learn (I’ve got time since I’m retired) and I spend a couple of weeks to learn to import the models, position them, fill in the background, weld it together and export it as an STL.

I then was able to import it into V Carve pro since it was now just one STL model. After that I calculated toolpaths, optimized feeds/speeds, and cut it.

I really want to thank everyone for the recent topics on feeds & speeds. They really helped me nail that in my tool paths and product good size chips. I feel I can now pick up a bit, check my material and calculate an accurate feed rate and router speed.

Great use of multiple software to get what you want … and avoiding enormous upgrade fees (Aspire).

Would you be able to do a short video or steps/screenshots for this process… particularly the combining of the two stl files and their manipulation in blender? Especially with the new Blender 2.8 interface since that is what new users will now start with.