How do you dial in your vice?

Now that I have upgraded my little toolmakers vice (which is older than me and has served several owners well) for a slightly larger item. I have a vice which is wide enough to need to be dialled in. I got it within 0.025mm by using the edge finder on the left of the fixed and mobile jaws then checking across the face of the fixed jaw, but that was somewhat slow.

Ignoring my somewhat makeshift clamping for a moment, how do you dial in a vice on your Shapeoko?

Does your method check the Z level of the vice too? 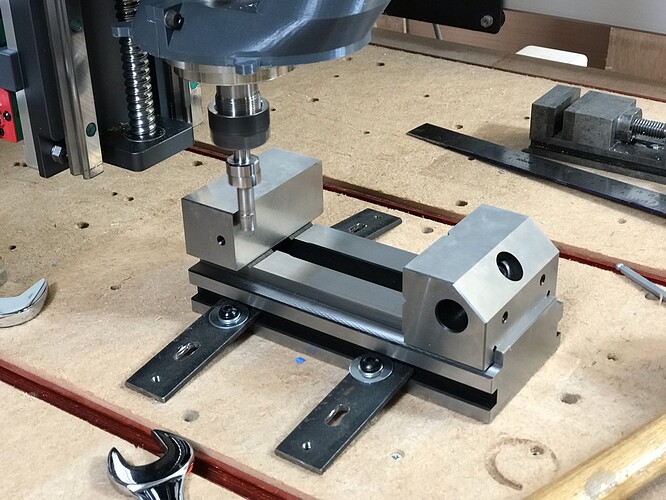 I use an indicator mounted to my Z carriage. I currently use a magnetic base but I will be switching to a clamping base soon. I tighten my vise down about 50% of what I normally do and tap it in with a block of wood and a small hammer.

Thx, what do you stick the mag base to?

The linear rail on the HDZ?

I do not have an HDZ currently. I just mount it to a section of my Z-Plus. You will need a clamping style mount. You could also drill and tap a hole and do a threaded mount. I also have a ground straight edge that I clamp in the vise to give me a longer reference if I am really trying to get something very straight.

I rough my fixture setup out with a carbide blank in the router, then dial it in with a test indicator. I originally used a mini noga mag base stuck to the steel Suckit mount. Just recently installed HDZ, lacking the steel, I’ve been clamping a .375" indicator mount to z carriage. Not tidy, but it works.

The steel plates on my Shapeoko are warped, I indicate and square the fixture every time I power up.

The steel plates on my Shapeoko are warped, I indicate and square the fixture every time I power up.

Slight differences on every startup are a pain indeed.

I’ve taken to pushing my X rail backwards into the Y endstops before power up to get a consistent X Y square startup now. The 0.5mm or so of random variation on startup was just causing me too many headaches when trying to flip a workpiece. When I’m doing a job where need it to be square I jog X all the way forward and measure the Y endplate to front steel plate gaps to check it’s where it’s meant to be and that the Y belt travels are also consistent.

Agreed. With previous v-wheels, I’d pull the whole gantry into the end stops at power up. The frame is quite parallel and square. They seemed to agree easily enough. The new wheels(slightly different) I recently installed offer some resistance and preload, the gantry springs back at power off. I suppose I should go about fixing it one way or another at some point.

@LiamN I’m curious about your experience with this type of edge finder in this spindle. I would expect to use this tool at about 1200RPM, which is well below the range of the spindle. Can it spin that slow?

I upgraded to a VFD driven spindle on an HDZ, I left the minimum speed setting low on the HuanYang VFD so I can start at well below 100 RPM. You’re quite right, probing is around 1,200 RPM, it seems happy at 1,000, I just have to be careful to turn it up slowly as it doesn’t like going faster

I may be suffering from some form of upgraditis however, every time I look at the machine there is less wood and more metal visible, I’m not sure how it happens but I may need a forklift to move the machine soon. 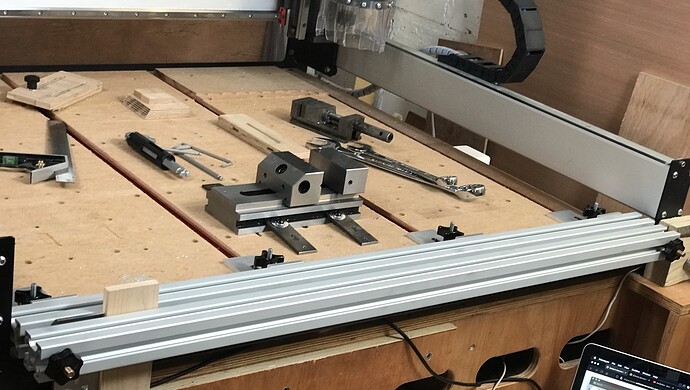 How do you like a vise like that? I want a vise for mine but I struggle that this eats up so much z-axis real estate and the only low profile vises I find are made in Europe.

I really like it so far, more so than I expected, wish I’d bought a heavier vice earlier. Having square & flat face, top and sides on the fixed jaw to line things up on makes life so much easier. Cutting sounds completely different too as the clamping force is pretty good and the vice is 10kg on it’s own (22lbs). I’ve also already started zeroing on the fixed jaw face and side before even loading the workpiece.

As I’m sure many others have before me, I spent ages looking for something that would fit under the Z carriage (HDZ for me) but give me a proper set of square and flat surfaces to clamp with. The only vices short enough I found were toolmakers vices, this one is only 80mm (3.15") high total with 40mm (1.57") jaw depth 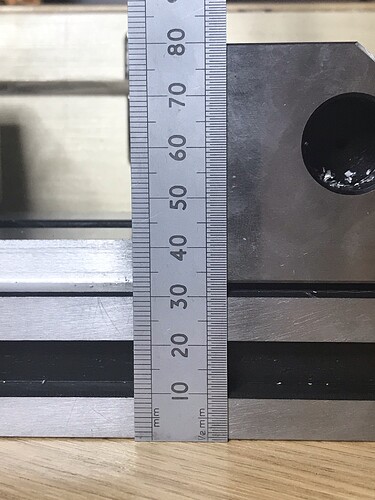 It clears the bottom of the HDZ by about 10mm on my current spoilboard, Jaws are 90mm (3.5") wide with a 120mm (4.7") opening and it’s a pin vice which pulls the moving jaw down as it clamps. No big handle sticking out is nice although I’m still getting used to the pin mechanism.

There’s enough Z travel on the HDZ that I’ve not been limited so far, I bored holes through that 4040 extrusion in the pic above with it clamped in the vice without problems, I am careful to set small retract heights in the Fusion CAM though. I am also being careful to think before using the rapid positions and send the Z axis up to be safe.

I realised just before buying that most of the Chinese imports seem to have a row of holes down the side but this one I found at a local supplier
https://www.arceurotrade.co.uk/Catalogue/Workholding/Machine-Vices/Precision-Tool-Vices-Type-2

has slots down the side instead which I preferred. The fixed jaw face, sides top and back are as flat and square as I can usefully measure which surprised me for the very fair price. This supplier actually seems to do some QA on their stuff, it’s not the first surprisingly decent item I’ve had from them.

I plan to mill a slot in a section of spoilboard to recess the vice to get a bit more height clearance but I’ve not yet run out of travel on the HDZ and my spindle is low enough to put the standard Carbide3D 1/8" cutter straight through the spoilboard.

Does that help at all?

Depending on what you want to spend, you could look at the SMW Mod Vise. Here are some links to the things you might need to get started with one:

We love using these vise mini pallets as fixture plates when CNC machining parts.  Each hole is precision machined for a 0.25" dowel pin and tapped for a 1/4x20 fastener!  Use with strap clamps, toe clamps, parallels, shoulder bolts and... Mitee-Bite Talon Grips. These clamps are 3/4" Long x 1/2" Wide x 1/4" High This is Mitee Bite Product Number 32050 - clamps sold individually, not as a set of two. For use with Saunders Machine Works Modular Vise Clamping height when used with the...

Reversible Steel Jaw Insert compatible with all SMW Modular Vises. - Smooth, non-marring side for light-duty and finishing operations - Serrated side for extra grip when roughing!  - Clamping height when used with SMW Modular Vise:...

They also have a whole fixture plate if you want to go that far like I did: I love this setup but it is pretty spendy. All I do is cut aluminum at relatively tight tolerances for a hobby grade machine so it was worth it to me.

Hello Liam; I have only just got into the need to do this. I have a dial test indicator with a 4mm stem and I obtained a 4mm collet for my Makita TR 0700 CX4 trim router from Elaire. With the 4mm collet installed it is a very simple matter to check along the front edge of any vice I am using.

Additional accuracy could be sought using index pins to align the hobby vices but they pretty much seem to fit where they are supposed to fit. The fixture tooling plate from SMW, (while I do acknowledge that it is a complete luxury in terms of its cost) has proven to be an essential adjunct for work repeatability and security of the workpiece. I enjoy great comfort with my workholding now and I do not have one iota of buyer’s remorse.