How to draw a star --- Carbide Create

Andrew: I’m 75 and my eyes are not so good. It wasn’t until I opened your reply again to try working on this star that I noticed you did a very, very kind thing and attached a ready made star for me. I am touched and thankful. I’d like to ask just one more question, if I may. When I opened your attachment I was told that it was made on a newer version of Carbide Create than the one I have. I downloaded my version about two weeks ago, it is a trial version. Is there a newer trial version? Mine is build 474, built of 2020-07-20. Many thanks and blessings.

The latest version of Carbide Create is 514 available here:

The title says it all. We’re trying to find extra value we can provide to the Carbide 3D community, who might have a lot of extra time on its collective hands, and we thought this might a good distraction for people stuck at home and it might give users who sell products a way to level-up their offerings. Go to https://launch.carbide3d.com/promo and claim your free one year license for CC Pro. If you’re not logged in you’ll need to do so and then visit the link again. UPDATE: Due to the larg…

Andrew: I appreciate the star file you sent, but I also wanted to learn how to make it as well. I’ve attached my file and am wondering if you can take a look and comment on it. In the model mode the simulation looks “so so.” The arm are not a nice straight slop and look more like a sagging slope. When I go into the tool path 3D mode the simulation looks a layered 2D.

As discussed/shown above, the angles of an even star like that don’t work for the modeling — you need the more acute version to make the angles come out as they ought, but unfortunately Carbide Create doesn’t agree on that, hence my needing to model each step w/ the blend.

The layered appearance is caused by the component being extruded up higher than the stock thickness: 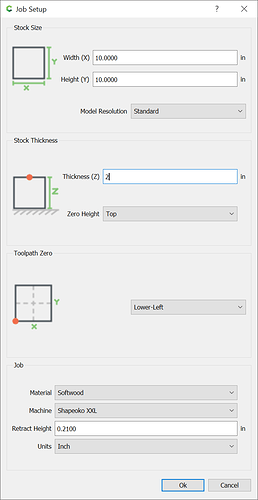 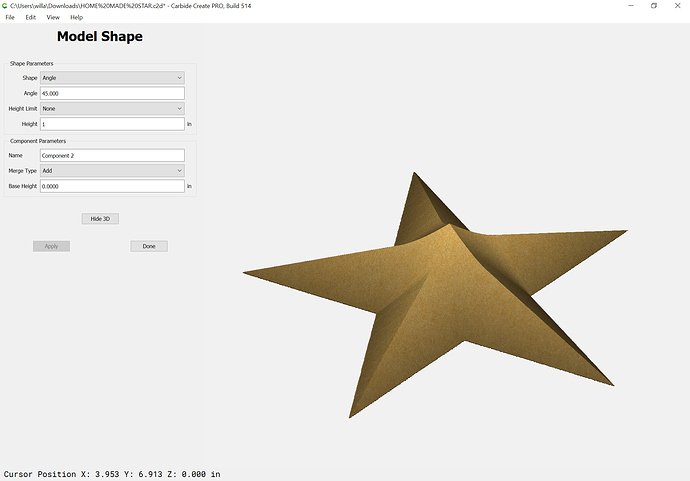 William: I have modified my file to the point that it is acceptable as an experiment that I’d be willing to run, with one exception, the amount of time. I have attached that file and am wondering if you’d take a look at it and tell me if it might be possible to cut down that run time.

Interesting that you were able to get a 3D carving done w/ a V endmill — I suspect that’s part of the problem.

Note sure the preview is what you want: 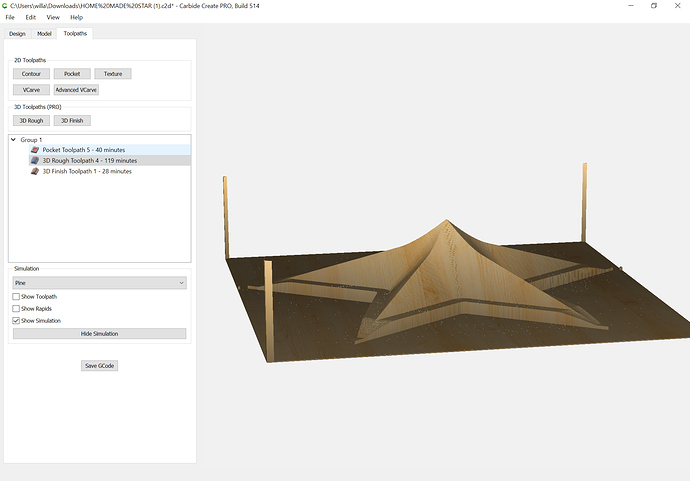 Let’s consider something a bit different — hang on, gotta do some drawing.

Okay, what should work is a series of overlapping geometries each of which is assigned an advanced V carving: 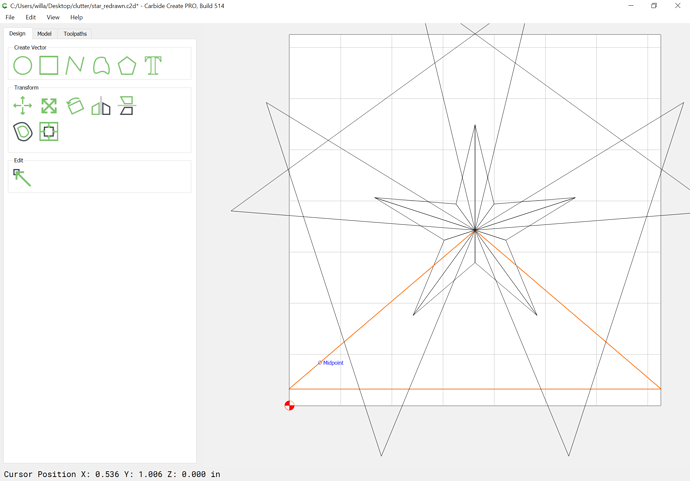 (we will clean up the overlapping presently)

but unfortunately, the 3D preview is not correct: 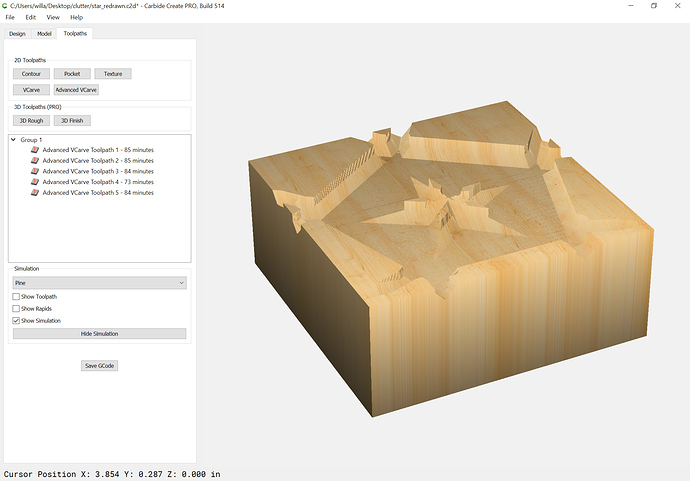 Unfortunately, cleaning up the geometry didn’t resolve the overlapping issues: 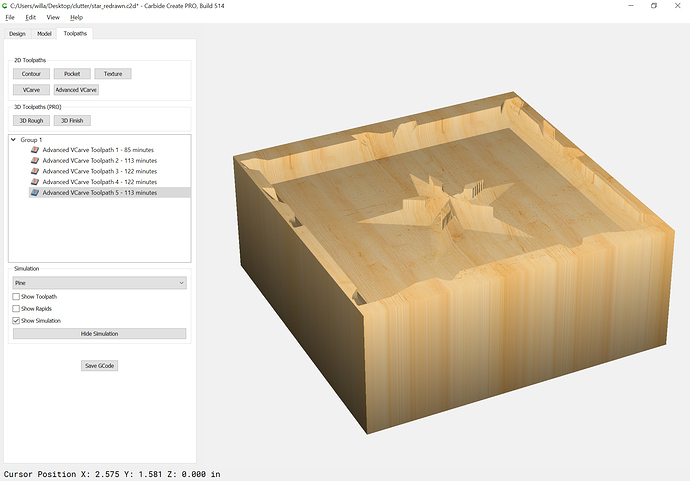 And a 3rd party previewer seems to indicate that it is caused by the V endmill being represented as a truncated cone — I believe it would cut correctly. 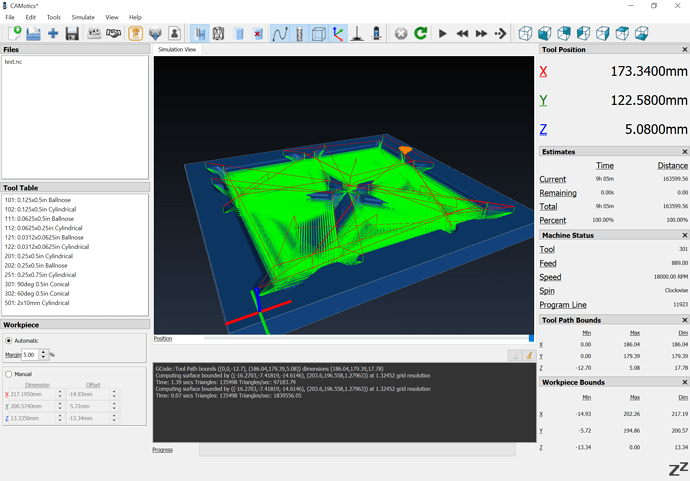 However, if we reduce the size to be w/in what the selected endmill can cut we get the desired result: 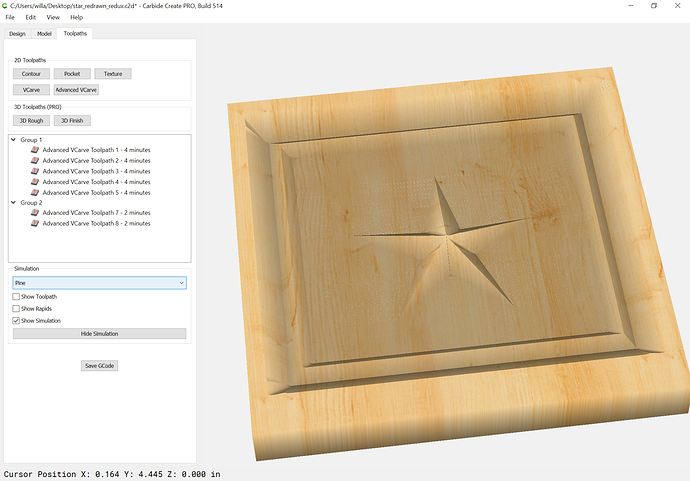 William: That’s why you are the expert and I am the novice. I changed that and it cut the time down quite a bit. One last question (I hope), I set the V-Cut to feed rate of 90, plunge rate at 30, and pass depth to .4 and I am wondering if I am pushing things or not or what you would recommend.

What material are you cutting with the V endmill?

Did you try the file:

and the specific shop page descriptions, which for the Carbide 3D tooling are linked to from the entries in Carbide Create.

You are correct. I did mean the 201. My bad! Sorry. I have a 3 flute down cut end mill and am guessing it could be substituted for the 2 flute?

Yes, with a suitable adjustment for the chip load.

A post was split to a new topic: Importing files at a given dimension

CC641 (now in beta) adds a Circular Array command which makes this a bit more straight-forward: 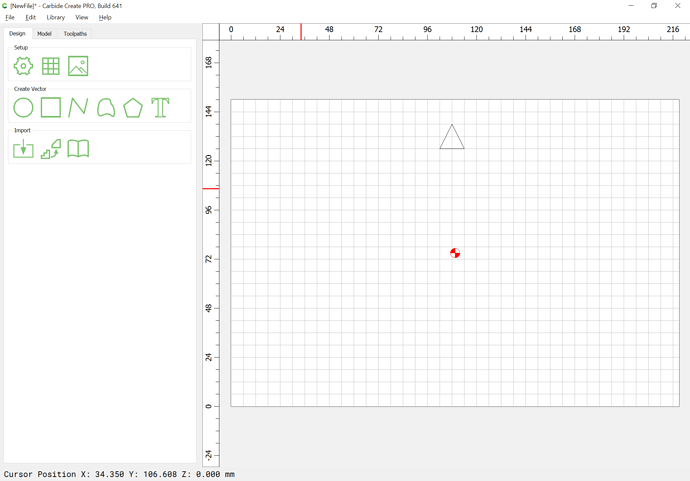 Select it and choose “Circular Array”: 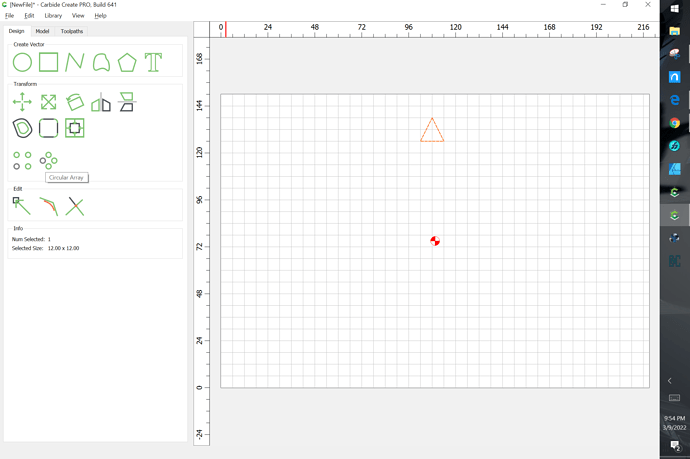 set the number of items to 5 and either type in the numbers for the center or press the button “Select Center in Window” and then click in the window to indicate the desired centerpoint: 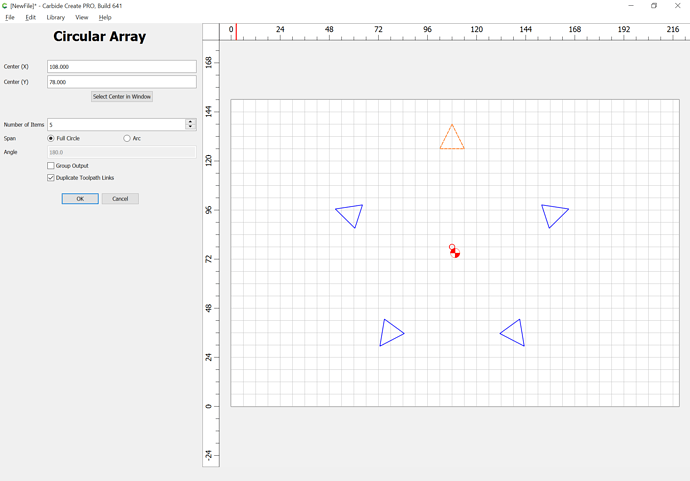 While the immediate impulse is to just draw the entire star at once: 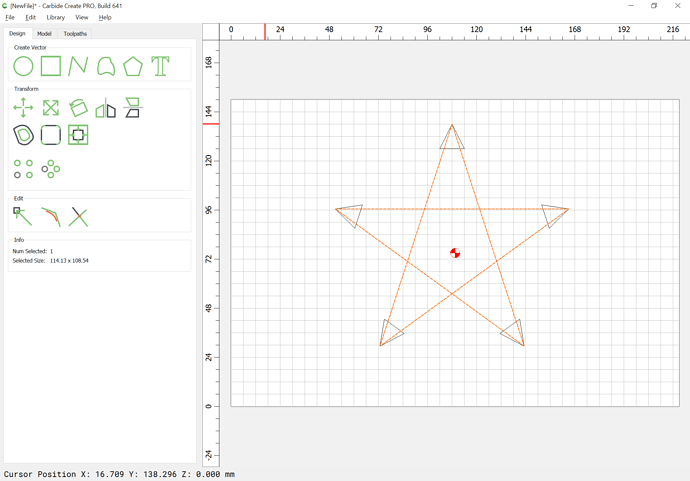 this results in a self-intersecting geometry which isn’t a good way to draw things — instead, draw parts of the star using a few points at a time so that they overlap: 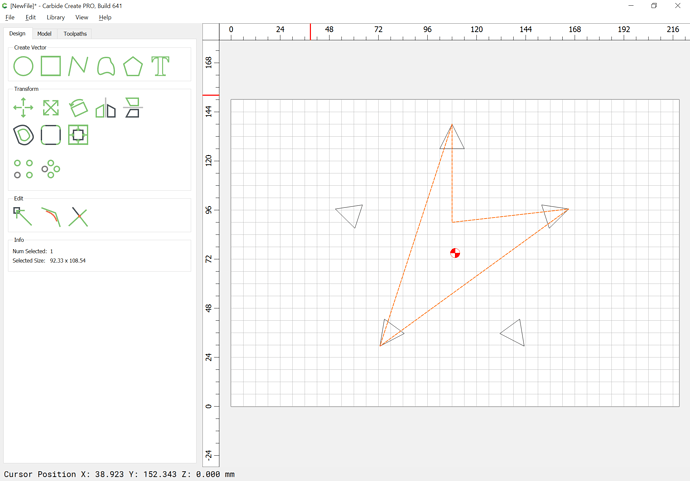 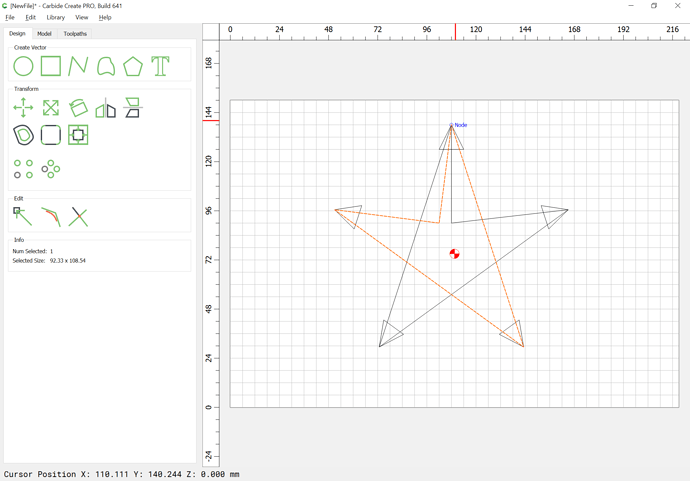 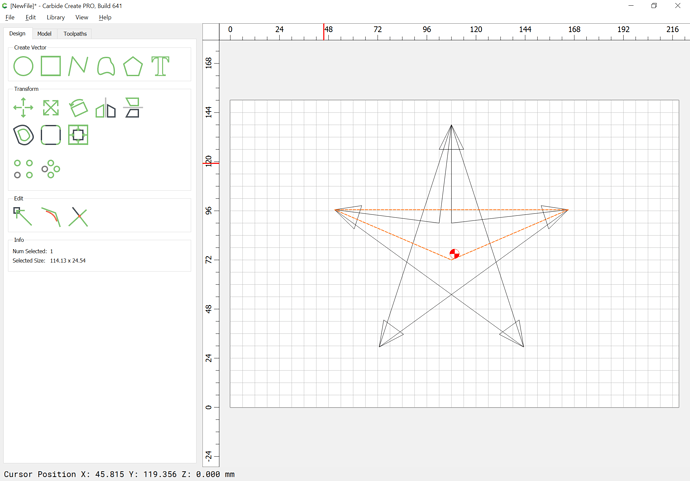 Then select them all: 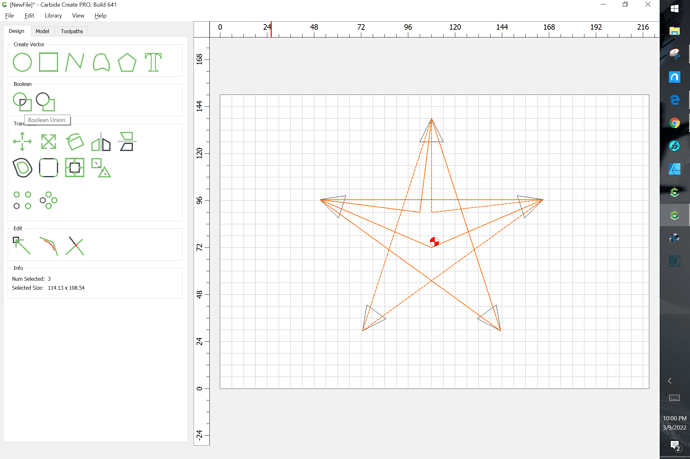 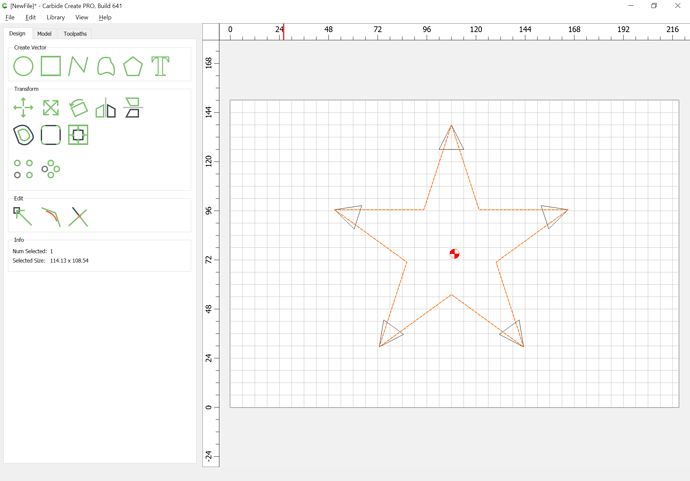 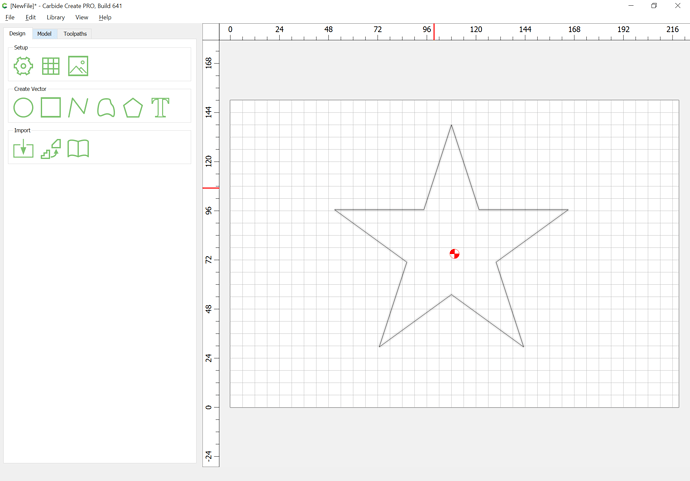