In case anyone wanted pictures of the 2.4D board I just received today. As stated no E-stop pins on this board either 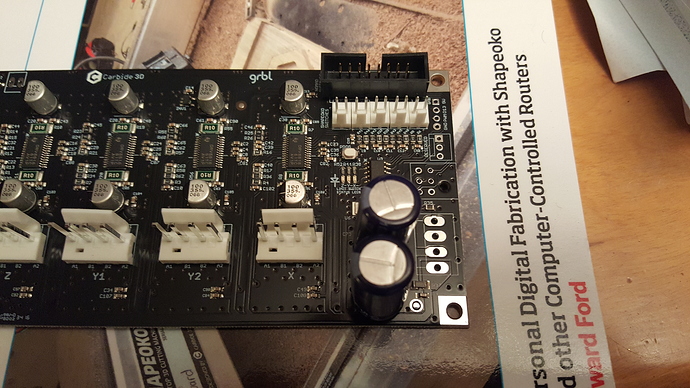 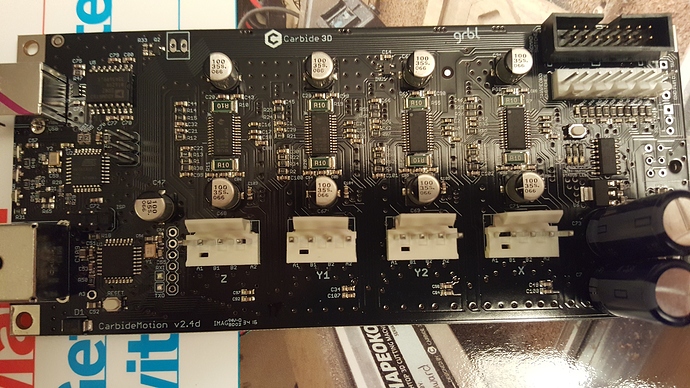 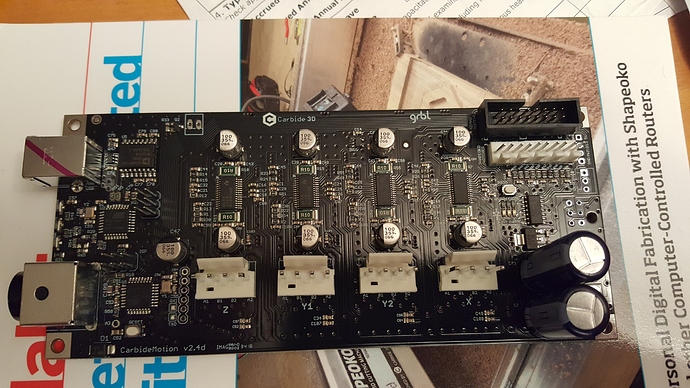 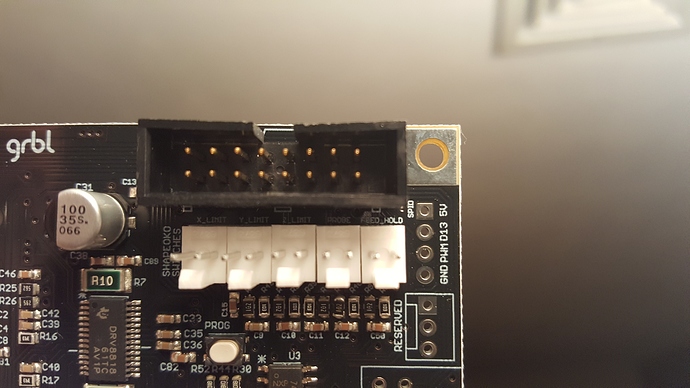 Can someone enlighten the community (OK, me) about the purpose of the IDC ribbon cable connection on the upper right of the v2.4d PCB (the last picture)?

Does this parallel the limits, probe pins?

That’s to connect it to a nomad 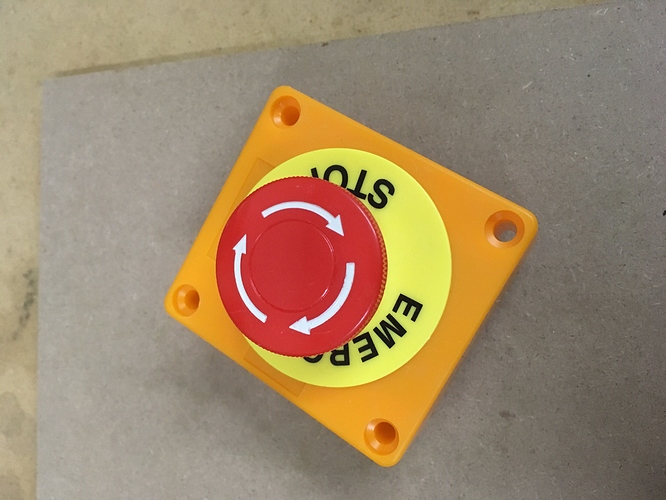 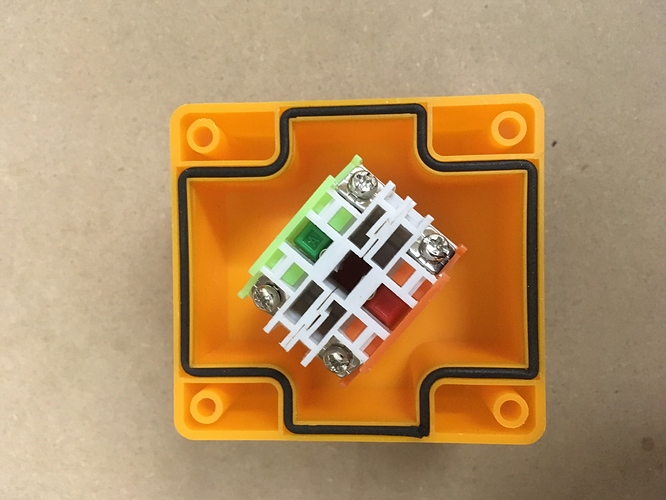 As the pics show… I have a Green side and an Orange side.

Several posts indicate that the Open Side goes to the E-Stop pins.

My problem…
The only printing on my new E-Stop switch is in Chinese.

Can anyone tell me how I can tell which side of the switch is NO and which is NC???

And once I know which color side is Normally Open… do I connect the two wires to the same color terminals?

My switch looks the same as yours. You can actually see the contacts inside open and close. Mine the green side is N.O. Yes connect to same color.

A million thanks Steve.

Probably best to ring it out with a multimeter to be sure, the one I have wasn’t real clear either. Also does your Carbide board have EStop pins? Mine is a later board and does not, so the best I could do was cut power.

Thanks for the note.

My board does have the pins. I bought the E-Stop and a Touch Plate at the same time and picked up the male & female connectors from DigiKey. I’m gonna give it a shot later this week.

Very happy with my new Shapeoko. I do question carbides are not incorporating/offer him a killswitch option. CNC machine even for the most experience machine can be dangerous.

I’m happy with my shapeoko 3 xxl. Ive had it maybe a month or a little longer, I have serious catching up to do. I work nights and loads of hours so I don’t often have time for it but there’s so much to learn! My last project was a vinyl cutter which is still cool but way simpler that this bad boy. I gotta say though, my vinyl cutter program can do matrix copies which is multiple images but carbide create gets a headache and breaks a sweat when I do multiple copies say to rout the same image many times on a single workpiece… But all in all very happy I made the purchase!

Hi Rich. thanks for posting this description on wiring an Estop using a power strip and extension cord. I have a question: I see the Estops on amazon all showing both 1NC and 1NO. which do we want for your set up - NC? thus when the switch is hit, it opens the circuit? am I understanding this right? thanks

Normally Closed (NC)…and when we hit the Oh $hit Botton (Switch) it opens and stops the flow of pixies to the system.

Can’t count the number of cutter’s lives I’ve saved because of this button!

got it. thank you. so all these amazon switches are listed as 1 NC/1NO, so I guess they can be used either way. I just wire one side of the switch - yes?

The correct side of the switch…(NC) (I prefer to interrupt/break the Hot (Load/Black) wire, but in theory interrupting the neutral would also work…but I not a fan of switching with the neutral wire)

I don’t know why this isn’t a ready made item on the market…(Million dollar idea for someone…LUKE??)

EDIT: (ADD) My 4-axis machine’s motherboard (GRBL) has an E-Stop built INTO the board…and THAT system uses a NO switch. Low voltage 5V system…VERY easy. Maybe someday C3D will add that to their board…YES it ALSO shuts off the Router…since I use a relay to start/stop my router via the M3/M5 gcode command.

Maybe because this is easier? 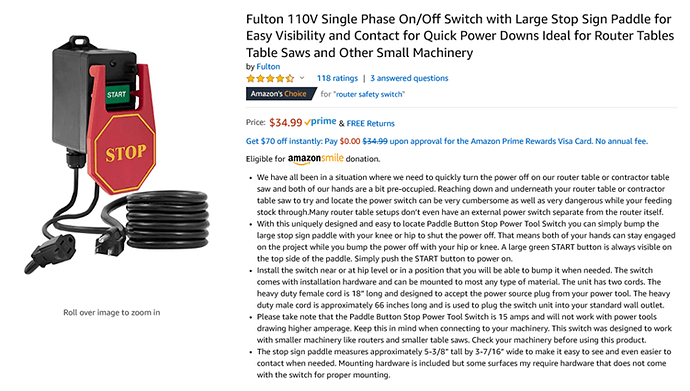 Every Shapeoko should come with one of these IN THE BOX! (IMO)

EDIT: This unit does NOT work with the router…it was a failed experiment!

Yup - that type is technically considered safer if wired and used properly, but the specs say it’s only rated for 1/2HP motors (because of the relay?)! The Makita and Dewalt routers claim to be 1.25HP.

Yep, for those who are confident in wiring things up themselves there’s lots of sellers on eBay and Amazon selling spare No Volt Release / E-Stop switches for table saws, router tables etc. at quite reasonable prices. I initially used one of these wired into the power cable of my Kress spindle.

I agree that it would be nice to have a pre-made product with NVR, E-stop and some (locally relevant) outlet sockets though.