I made my first chopping board and need some inspiration

Last night I machined my first chopping board, the idea was it would be a gift for my mate who is getting married. Whilst I’m incredibly pleased and tempted to keep it, I’m sticking to my guns and will be gifting it.

I’m now thinking of ways I can finalise it and make it unique to the couple, for example their wedding date engraved, I’ve not done allot of carving so would like some inspiration or ideas…

Heres a pic last night, it hasn’t had its final sand or oiling yet the top is beveled and the underside has grab handles. 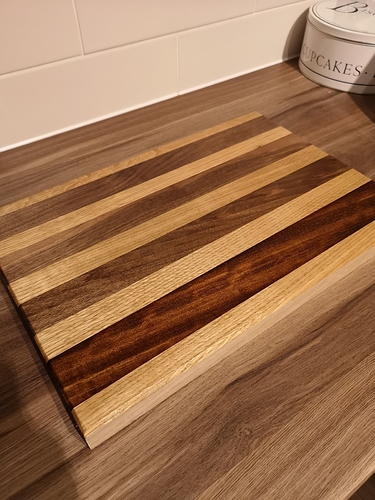 I have used the CNC with a core box bit cutter to create juice grooves around the perimeter of my cutting boards. This is a nice embellishment and much easier than the one off router jigs I used to use. I have considered (but never tried) making this groove something extra fancy, I think you could use a v bit and create a groove that transitions into a cursive v carved name or date. For a wedding gift, having the name of the couple at the top of the board and the wedding date at the bottom of the board would be a nice touch.

If you want it to actually be used, my inclination would be to put the couple’s name / wedding date around the edge of the cutting board — that way it won’t interfere with actually using it — just clamp it to the front of the machine to make the cut.

Thank you! I bought a chopping board myself in Australia, I’ve had it for over 5 years now and every time I use it I think of my time there. I’m hoping this has the same effect for my mate.

I sanded it today with the orbital and have 2 coats of oil on it now, it’s looking even better. Other then planing the staves prior to gluing the whole thing was planed, chamfered and the cutaways done on the S3 - its 43 x 29 cm so right at the maximum limits of my X.

I did consider using a core box bit cutter for juices, but for this board I didn’t want to to be used as a Sunday best, more of one that is used daily. When doing the glue ups I made the board almost 1m long - so I have an identical board to cut for myself, and that will have a grove. On yours do you also make a small circle for

I like the idea of using 2 corners - I hasn’t thought of that. I like @WillAdams idea of milling the side too. I was considering caving it then using white epoxy to fill the v carve - although not sure if it would discolour?

I don’t like the idea of epoxy on a cutting board — I know it’s supposed to be inert and some varieties are rated as FDA food safe, but it’s just a point of failure waiting to happen to my mind.

If you do too much, they won’t use it like you want.
Epoxy won’t discolor if you seal the wood after you carve. The epoxy will wear differently, though.
A wood inlay would look great. If you haven’t done it before, I get it might be risky.
You could always engrave and inlay a metal plate for the bottom.

Yeah I’d consider maybe pocketing the bottom and having raised letters with the name of the couple? They’d know it was there. I’d feel weird using a cutting board with my name on the face of it.

I went for a subtle engraving - this is pre sanding 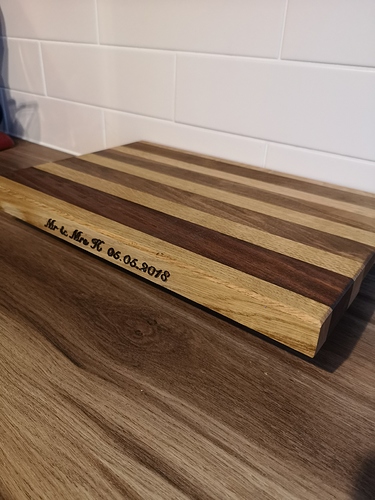 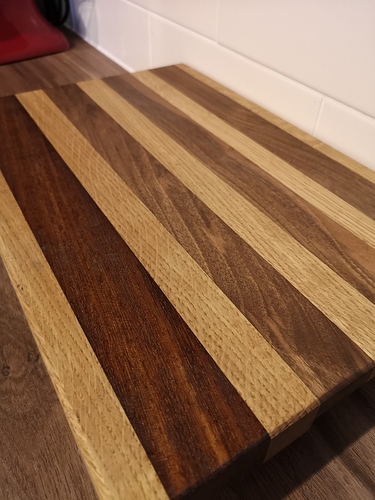 I have some veneer that is close to that, Sauers’ called it Kalebra. It also looks a little like sun bleached Padauk.