When I create a file in Illustrator and export it as an svg file, it will not show up in CC at all! Any ideas as to why?

Export as an SVG from Illustrator.

Note that SVG import into Carbide Create has certain limitations/requirements:

If you have difficulties please post the file here or send it in to support@carbide3d.com and we’ll do our best to assist.

@docmorrow As a very basic test, try importing this svg. I used default export settings shown in the png. Other than a scaling issue, it imported correctly into CC474. I haven’t tested it on CC520 (other computer), but I imagine the developers haven’t significantly changed the svg import functionality.

Hopefully the SVG comes through as downloadable, not rasterized for forum viewing… Otherwise let me know and I’ll try again. 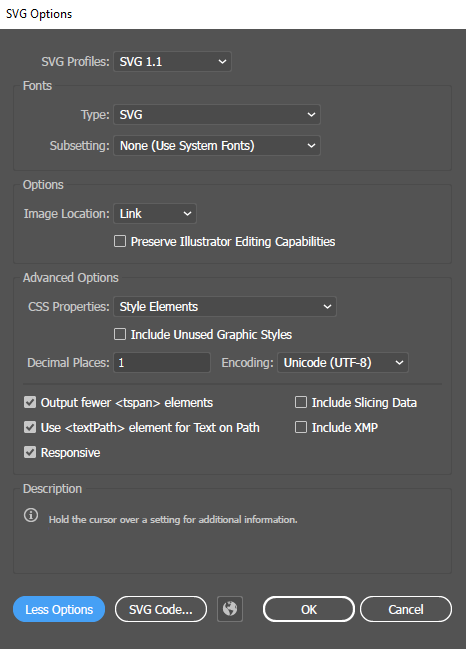 Confirmed that CC520 behaves just as well as CC474. Downloaded the svg from my own forum post and opened it in the latest version.

I’ve successfully imported complex SVGs and DXFs into Carbide Create in the past, so I’m pretty sure it can work. We just need to isolate the issue. If Will’s suggestions don’t point to an obvious issue, I’d suggest a few next steps:
(1) Share the file, if it’s not proprietary. I or others can try it on our end and help troubleshoot.
(2) Even if you don’t think you have an array, try these steps anyway to eliminate any unintended arrays/clones (“exploding” in AutoCAD language).
(3) Start deleting features categorically. Delete all arcs. See if that works. Then delete all circles. See if that works. Delete polylines that aren’t closed. See if that works. You may narrow in to a datatype that isn’t supported by some link in the chain.
(4) Last suggestion, make sure your units aren’t off. Aside from the inches-mm scaling factor of 25.4 (you’d probably see that, but not always) I’ve had issues before where I designed something in one program in microns and it imported to another program in database units of nanometers. It was there, but 1000x smaller than it was supposed to be, so it wasn’t immediately visible. Sometimes selecting objects (ctrl+A) can reveal small objects by the resizing handles that surround the object(s).

Let us know how it goes.