Initial thoughts on the Nomad 883Pro

Ok, so I received my Nomad 883Pro a few weeks ago and finally got a chance to play around with it. After installing MeshCAM and Carbide Motion, I connected the machine to my computer and started it up. I placed the 1/8" endmill in there set my origin somewhere in space above the bottom left corner of the plate and ran a tutorial .nc just to see it run. I also played around with the jog function and tried out the MDI and ran a few lines of code. Two thoughts on that:

I used my Macbook to drill some holes into a scrap piece of plastic while using the keypad jog and it was pretty nice although sometimes when I hit a direction the machine would register two keystrokes instead of one. This made it a little annoying when I was trying to zero an axis with a dowel pin in the collet. It would jump twice when I was honing it in and would deform my shim stock. Not a big deal.

Part 1:
After getting used to CM and MC, I loaded up a quick part and used the MDF wasteboard and carpet tape to mount a 1/4" thick piece of ABS. I ran my part and on the final pass/cleanup pass, the piece came loose and got a knick in it. Not the most reliable way to secure a part but I thought I’d give it a shot.

Part 2:
I had purchased the low profile vise and mounted it to the table (sans MDF wasteboard). It was a little loose in the provided holes and I biased it towards the front of the machine and tightened it down. I saw on another post that people were receiving dowel alignment pins and hit up C3D to see if they had forgotten to add them to my order but apparently they aren’t including them anymore. I think I quickly measured them and they weren’t standard (to my fading knowledge). I’ll make a set to use next time.

I also wanted to make some machinable jaws for my next project in which I was using a round piece of stock and didn’t want to waste a ton of material on using the flipjig and hogging out a larger block of material. 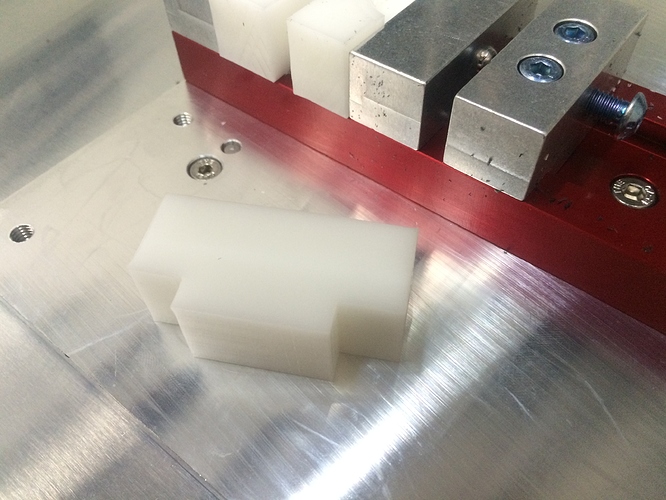 I’ve used this type of setup when I used to make hubs for our little mini-bajas in college. I’d place two machinable jaws into the vise and add a spacer between and clamp down. I’d then machine a pocket for the stock material and a secondary pocket for an subsequent OD of flipping the part and machining the backside also including a way to clock it, if needed. 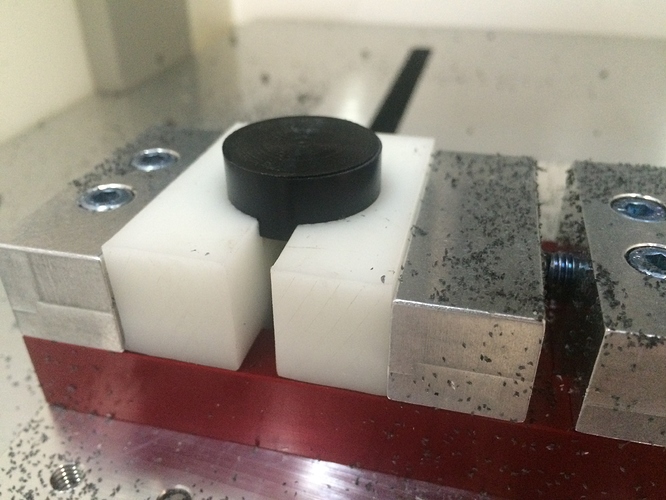 ABOVE: two machined jaws the will hold the part in two configurations while maintaining a standard origin. What you cant see is a hole which allows me to clock the piece when I flip it. 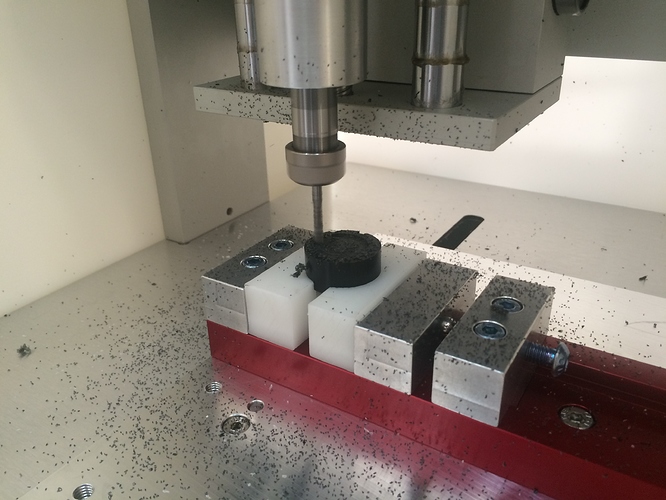 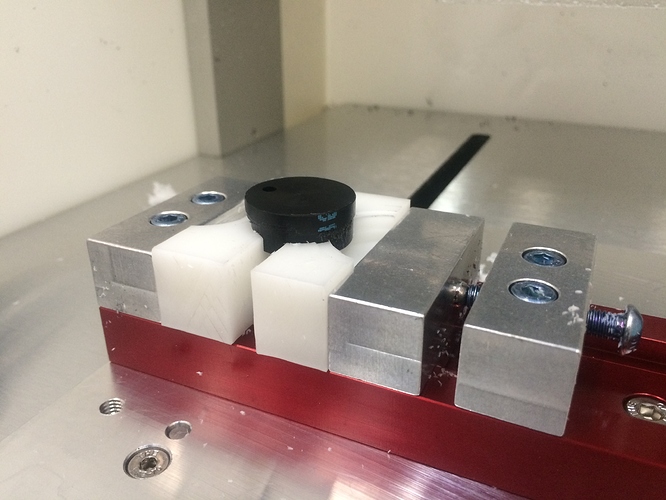 When I was clamping down the stock piece, the end jaws slipped a little. It was enough to machine one side off center but it wasn’t ruined. I tightened down the jaws, rotated the machinable jaws and machined the pocket again. After that, I placed my machined part upside down into the new pocket while clocking it with a pin and tightened it down. I machined the bottom side and got very nice results, for what I was fumbling to do. 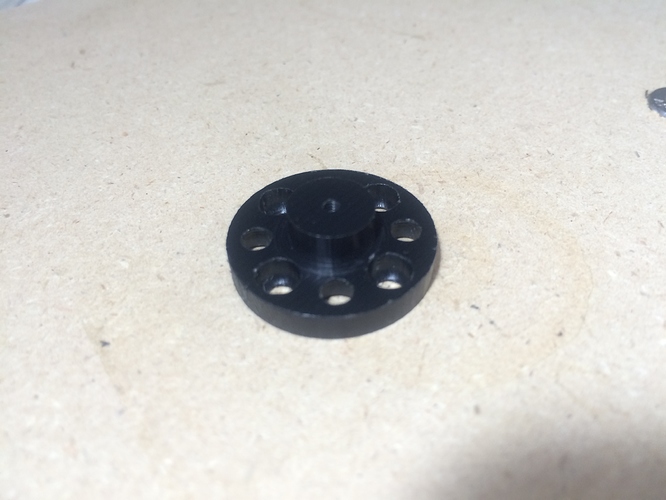 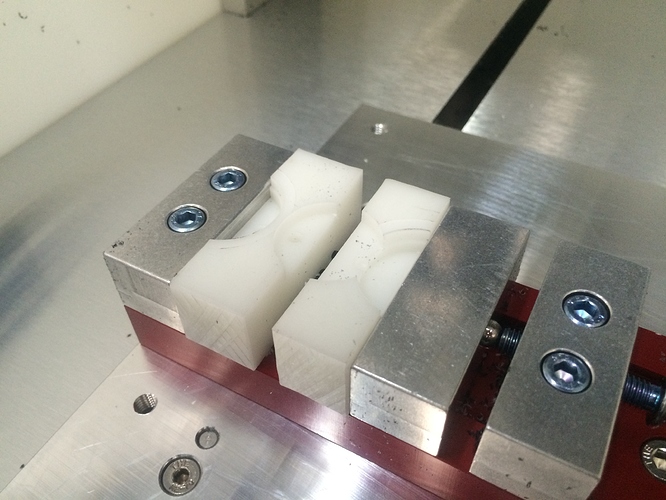 It’s a little rough on the surface finish but I haven’t had the time to dial in my speeds and feeds yet. This part has four countersinks per side set to a certain depth that is critical and it worked out pretty accurate.

Part 3:
I had to make a quick plate for another prototype and the challenge here was securing it down. From the first part, I had issues with the part coming loose so this time I had used the carpet tape on MDF and also used the mounting holes and the screws from the flipjig to hold down my part. I was also using AL for the first time and swiped someone else’s values for Speeds and Feeds. To say the least, the stepdown was so fine that it just made aluminum paste and took forever… I am going to run more test pieces when I get some more cutters in to find the most optimum settings. 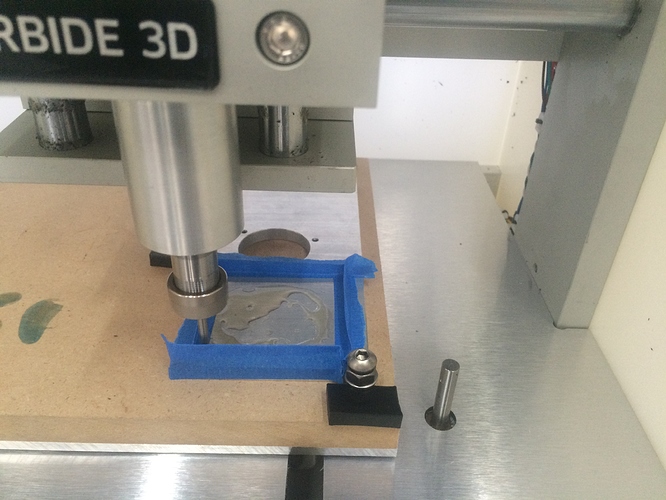 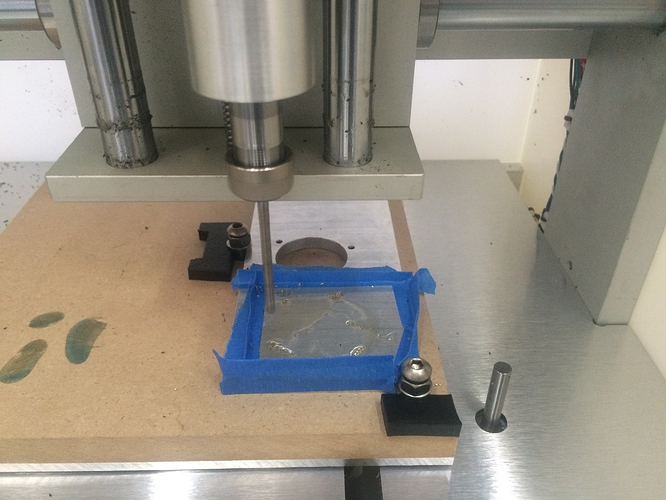 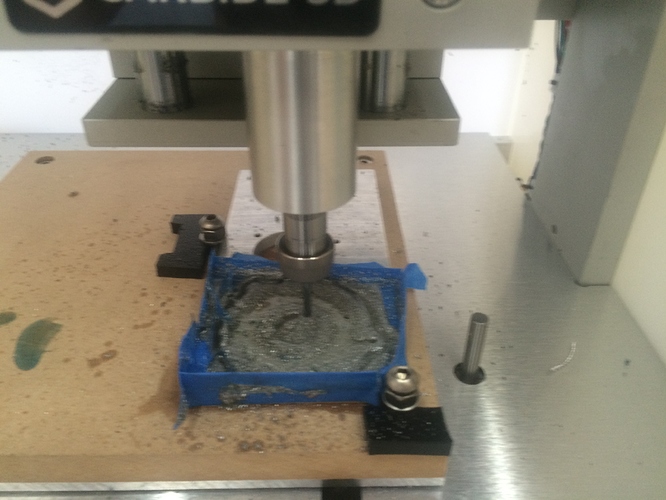 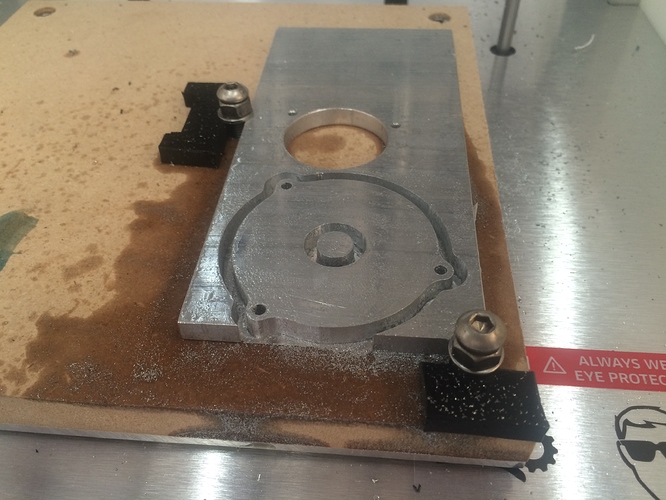 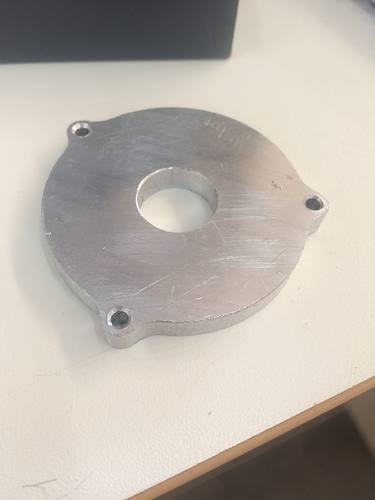 As you can see, I didn’t have any hot glue to make a nice coolant pool like Apollo does so I made some out of tape. It kinda worked but really didn’t. I used a center drill (spot drill) to make pilot holes and chase them with a drill. Since MC doesn’t do peck drills I altered the code to do them albeit the poor mans way without rapid movements so it took a lifetime as well. The MDF doesn’t like coolant so I’ll make a Delrin wasteboard soon. The part came out decent and with a little clean up worked like a charm.

Well, thats my quick and lengthy first post and all. I’ll have to edit to get the rest of the pictures up.

This machine is far better than the LMC machine I had back in 2004. Technology is pretty amazing these days! I can’t wait to hone in and get some really nice projects knocked out with this.

Always a good idea. Your CAM software has to support this. No need for G83 if your CAM generates all of the necessary parts (the Nomad doesn’t support it). If you need more ways to hold material in your Nomad, this is for you. The Threaded Table is approximately 1/2" thick and contains over 50 M6x1 threaded holes in it. The Threaded Table comes with the table, clamps and 5 M6 screws to attach it to the...

I have the former as do many. C3D recently came out with the later.

Fixturing in a sea-of-holes bed requires the right tools. A common fixturing (clamping) solution for sea-of-holes beds are step blocks and clamps. The High Tech Systems Nomad replacement bed uses an 10-32 (Imperial) threading, the C3D Nomad add-on bed uses an M6 (metric) threading. The C3D SO3 sea-of-holes is M6 as well. Surprisingly, these are compatible with at least one commercial step block clamping system: http://littlemachineshop.com/products/product_view.php?ProductID=2718&category= I…

Cut a spoiler board for each job.

I use BobCAD-CAM myself. I worked up a post processor for the Nomad. It wasn’t hard.

I recommend G-Wizard for excellent feeds and speeds. The Nomad has 0.07 HP. Be sure to select the derate for small spindle/router option.

Recommended End Mills How To

Choosing end mills requires choosing the appropriate characteristics (e.g. diameter, number of flutes, shape (flat, ball, bull nose ends), flute direction (up, down, compression cut) and so forth. Please jump to the putting it all together section if you want a simple summary. What follows are details of how and why to choose certain attributes of end mills. It takes some effort to learn the lingo but it is worth it so one can order end mills directly from a machining supplies vendor or distr…

I’ve used a technique where I machine a well into my spoiler. It keeps the lubricant from going all over the place.

This is a “safety feature” for n00bs. Yes, an expert mode would nice!

Yes, that would be nice.

MDF is a friable ("easily crumbled) material which generates small particles which are extremely hazardous to your health. Consider a dust head and/or negative pressure in the enclosure and a HEPA filter vacuum.

You can search the forums for several discussions on safe air and particle handling.

After installing MeshCAM and Carbide Motion

Be sure to pick up the latest CM… there have been some significant updates recently.

Thanks @WillAdams, I’ll check that out.

Man, I need to just ask you @mbellon for all my questions… haha.

I am finishing up work and will delve into those leads soon. Thanks!

\7. I wish the program would allow for me to see what line of code is running because I hit pause once and a second time to mistakenly quit.

If you click somewhere in the lower left hand corner (there’s no button, just… in the corner area) of the Carbide Motion window, a little hidden thing pops up which has the line of code, and some other stuff like tool probe length values and other stuff I don’t understand.

May I ask what your feedrate, rpm, stepdown and cutter is when cutting the piece of Aluminium? The finishing seems to be very nice on the picture. Thanks!