I am creating single stroke fonts from Inkscape into CC as SVG. A problem I am encountering is that some letters and numbers are missing strokes.Im saving as a regular SVG

Has anyone else seen these issues? 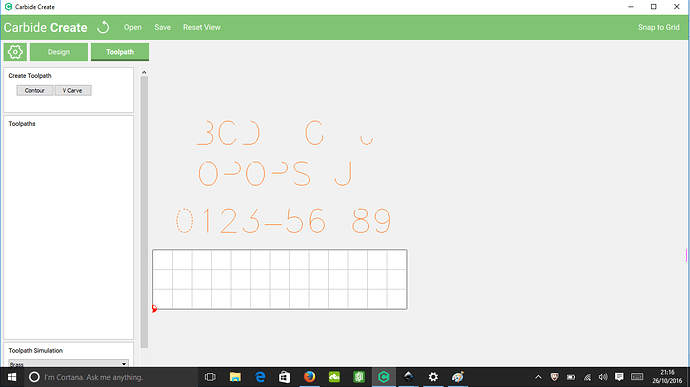 Make sure you are converting your text objects to paths. Select the text objects, then select Path>>Object to Path (or Shift+Ctrl+C)

This does not solve ir I’m afraid

Carbide Create doesn’t seem to have support for open-ended paths, which any of these letterforms which do not have counters would be.

If you want to use these fonts directly, I’d suggest doing it w/in Inkscape using Gcodetools, or by using MakerCAM.

The big reason to use single stroke fonts is efficient routing of letterforms — the problem is, this efficiency results in a boring, unmodulated, mono-weight/width font. If you can find the time for it, it’s better to use a normal typeface and a V-bit to instead V-engrave the text — you’ll get a much better and more expressive typesetting.

If you must use these fonts in Inkscape, then it’s simply a matter of expanding the strokes to paths (which must be ~10% larger than the size of the bit which you will be pocketing them w/) and then combining everything together: