Is the HDM spindle grounded?

I am still having lots of disconnects due to static. I’ve grounded EVERYTHING on my HDM…except the spindle itself. Do I need to ground the spindle? Shouldn’t it come grounded? Or do I need to attach some copper wire to it somehow and run a ground somewhere? Super frustrating.

It would not hurt anything to ground it.

Do you have any suggestions for how I could do it? I was thinking of attaching a section of copper wire from my dust boot (which is also connected to my dust collector with copper wire) to the spindle body…but not really sure how. Copper tape maybe?

Mine is grounded. Start with checking your physical ground at the plug. Also you may be having issues from your dust collection setup.

Mine is. I have a conductive probe and it lights up when it hits metal. Even thru the Saunders mod vises and toolling plates.

Here is a picture of the C3D spindle. There are screws at the top and bottom that you could take one out and attach the copper wire. There is no picture of the top of the spindle but at the bottom there are bolts. 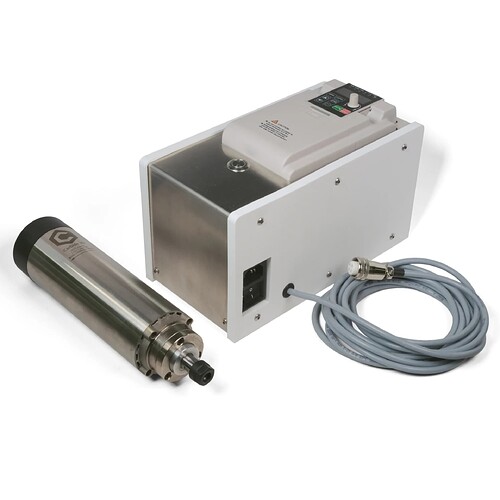 This spindle is different that the HDM spindle. I can’t speak to if that one is grounded or not.

I’d do a continuity test or email support to check but in general the metal spindle shell absolutely should be grounded, and grounded back to the VFD at the full fault current rating from the VFD for electrical safety.

The four pin connector on the C3D spindle also suggests 3 phases plus earth.

I concur with your reasoning. However, I have had cheap chinese spindles that nothing was connected to the ground pin in the connector. Of course, not saying that is the case with the C3D Spindle.

Early on I had occasional disconnects with my 110v HDM spindle. I confirmed the spindle is indeed grounded. Tracking backwards I found the grounded outlet the spindle was plugged into…was not grounded. The ground wire was just hanging in the junction box. Not a single issue since.

Ok so I have grounded the spindle, checked for continuity on all rails…everything looks good and is fully grounded. STILL getting disconnects when cutting plastic…with or without dust collector attached. I’m going nuts over here! One thing I will mention is that my laptop running the HDM is plugged into the same outlet…I don’t see how that could make a difference but I thought I recall someone mentioning plugging the laptop into a separate outlet? Why would that do anything though?

Please contact us at support@cabide3d.com and we’ll do our best to assist.

Any chance your USB communication cable is bundled in with other power wires? Try a test of it routed away from other cables, Might be just voodoo but it works for my SO4.

Yes, my USB com cable kind of touching a few other cables…I’ll try separating it. Thanks for the tip. I also just read that it is a big no-no to plug a VFD into a GFCI outlet…which is what I just did to try to test another theory. I’m running the machine now and it is not cutting in a nice smooth motion like it did previously…I’m thinking the GFCI outlet is also messing with communication.

Plastic and PVC sheet apparently pick up a lot of static energy, especially if it has a peel off surface.
I was dealing with this issue and tried using a damp rag to wipe down material first. I also wiped the surface with dryer sheets which seemed to help remove static.
When you move your arm over the surface if your hair reacts its going to cause problems.

Was looking at these ionizing bars but immediately stopped when I saw the price, but they could possibly be used like a wand to wave over surface to remove static energy.

Was considering a ground only wall plug with 4 wires run from underneath to the corners and attach them to the material edges with sheet metal screws or alligator clips.

Oh yea I tried dyer sheets, a little mini humidifier next to the material, tired wiping it occasionally with a damp rag…nothing worked. I think the issue is the spinning router creates static while cutting the plastic…so even if you remove the static with dryer sheets or whatever…it’s just going to build up static again while cutting.

It is also EXTREMELY dry and cold in my shop…so that doesn’t help either.

The ground wire idea is interesting…I may have to try that.

Do you have the Peachtree hose with the metal core for your dust extraction? Can ground the hose as well, will reduce static significantly.

I don’t have that one…but I may switch. I am using this https://www.rockler.com/dust-right-reg-2-1-2-anti-static-dust-hose anti static hose from Rockler.

However, I am still getting disconnects even without the hose or dust collector attached while running the machine.

Have you grounded the hose though? Unless it has a good path to ground the whole hose will charge up and then discharge in one big shot.

You’re correct that just the friction from the cutting of the plastic produces static charge on both the chips and the workpiece. The cutter shouldn’t become charged if your spindle is grounded but the workpiece and chips will until something discharges them.

Unfortunately you can’t ground an insulator, many plastics are so good at storing charge that we use them between metal foils to make capacitors.

What may be worth trying is one of the various clothing or industrial anti-static sprays to treat the surface of the workpiece. These leave a semi-conductive coating on the material and allow charge to leak away. Apparently one can also make a cheap homebrew version by mixing a little fabric softener into water and spraying that on.

Edit - It’s also worth noting that the absolute humidity in your workspace has a major impact on this, once your dewpoint drops below about 5 degrees C very little charge will leak away through the air, that’s why we get more static in winter, whether indoors or outdoors.

That looks like a good hose! I run sinewave APC’s on my 120v machines also.