Is the Nomad's aluminum composite base structural?

The base part with the grooves cut into it for the table to travel through. I don’t believe it is structural?

I ask b/c I’m thinking of widening the two grooves so I can use some different clamping options for my 8"x8" blanks. I use the blanks to cut out animal shapes (teethers) and I go through so many boards that I have already stripped a hole in my table, and with a new table on the way I don’t want it to happen again.

An idea I have to secure the board is to put a smaller bolt through the top, and secure it under the table with a nut. That way I won’t contact the threads at all.

Or perhaps there exists a low profile clamp that I can use, that would allow me to pinch the table at the sides and/or top and bottom.

The alternative bed that will available soon is a sea of holes. You could grab the material near the outside side on the bed - with a small size loss - and also hold it down. 7x7 is doable and maybe a bit larger.

You know, it suddenly occurs to me that it might be useful to ask Derek to make the replacement bed slightly larger - by the width of one row of holes, or bar, or whatever - along the front, right, and possibly left sides. That way you could put a bar or a cam or something outside of the 8" square limits, without sacrificing any of the Nomad’s already rather small work area.
There’s definitely room inside the machine - an inch or two at least - along the front and right sides (facing the Nomad), as well as a small space on the left before you hit the probe; at the back it’s a probably too tight to fit.

Do you think that’d work? I know he hasn’t started production yet…

Just to confirm your suspicion, no, the aluminum composite panel is not structural at all.

If you do ask Derek to make the table bigger, be aware that the probe is on the right in the new machine (the Pro) so if you make it much bigger, it’ll only fit one machine and not the other.

Beat me to it Robert! It cannot grow to the left. We’re already annoyingly close to the probe.

It could grow a bit perpendicular to that direction and a bit to the right. I think he’s already purchased materials for the first batch. Maybe for the second… but it will depend on the sales of the first batch.

@mbellon Are you going to announce where exactly these will be listed and such? because so far I’ve only seen comments that it’s coming soon to a web-store near you, but I’m not sure which one—perhaps I missed such an announcement?

So I modified the deck of my nomad to give me more room for the 4 mounting bolts. I was having issues using shorter bolts which resulted in me stripping a hole. Now I can use longer bolts and not have to deal with them bottoming out against the aluminum deck.

I think it looks pretty good. I’m going to clean up the lines a little but overall I’m happy 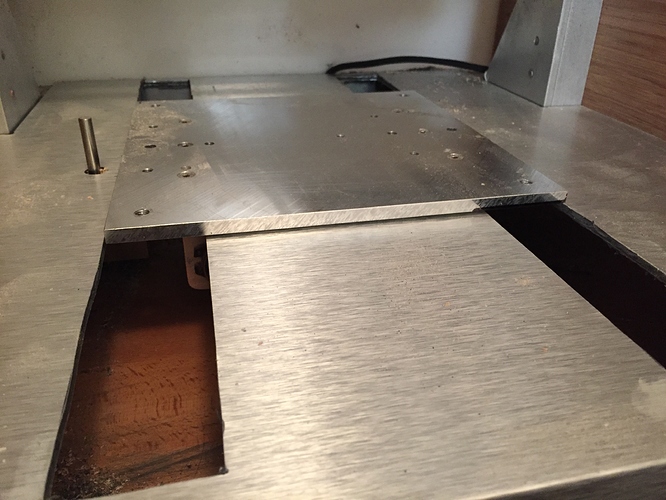 Looks pretty good! With those larger channels, I’ll bet you get a lot more dust going down. You probably have room to put in a sort of a downdraft table beneath the nomad, to collect dust. Kind of like what this guy made, but obviously with a MUCH lower profile. 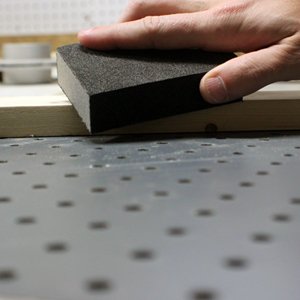 Now I think of it, though, you might be able to just widen the channel on the right a bit more, and strap a vacuum nozzle directly to the bed, feeding the hose under the machine and out one side.

I just got email from Derek at High Tech Systems @ http://www.hightechsystemsllc.com

The sea-of-holes bed and all accessories - including the new rocker clamps - will be available the first week in November.

For those that are concerned, Apollo verified that bed of the Nomad 883 Pro is identical to the Nomad 883 - anyone receiving the newer system can use the sea-of-holes bed and accessories.