Ok so I’m very confused on what to do next. I got the Jtech Laser hookup up to my XL and I can get it to power up but what’s next??? I’ve tried universel g code sender but its not doing anything. Can someone give me the dumb person version of what I’m suppose to do to start using this laser

What software are you using to generate the gcode for the laser? Are you trying to engrave/etch or makes cuts with the laser?

So far I made the code using the Inkscape plugin, what do I need to do next?

OK, I’m not familiar with that. I have a separate laser machine (a Darkly Labs Emblaser 1) and use Cut2D laser to make the gcode for vector projects or PicLaser for engraving and PicSender for sending the gcode from either program to the laser. PicSender can handle very large files smoothly. Did JTech not give some instructions for using their product?

OK, had a look at the instructions for the JTech Inkscape laser plug-in and it looks simple enough. One thing I noted on their overview page is that the program (or plug-in) may need to re-installed if there’s a problem. Hopefully someone else who’s familiar with the JTech unit will be able to give you more help.

Edit to add … Just noticed another thread about the JTech laser and GRBL1.1. Which version of that are you using?

Anyone using grbl v1.1 and jtech laser? If so what is your opinion and any advise you can offer? Thanks

I have the 3.8W laser from JTech mounted to my XXL. Take a look at this blog post. https://jtechphotonics.com/?p=6946
If you have already have v1.1 of the firmware then jump down to step 5.

Also, Carbide Motion gave me errors when I tried to use it with the laser. I now use cncjs as my grbl sender running on a raspberry pi 3. 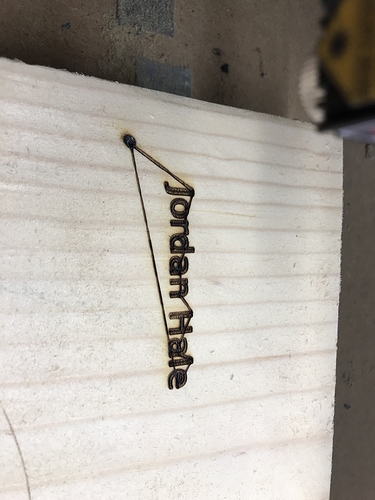 B4E704F3-38DC-4C2E-BCC3-0DD5F598E4B1.jpeg3024×4032 2.41 MB
Ok so after half the day I got everything running through Universal G Code Sender and get my G Code from Inkscape. The problem I’m having now is that the On off Command for the laser doesnt seem to do that. The laser is just on all the time, so if its doing letters its just cutting lines between everything. What is the issue? I see the Sender sending the codes for on and off…
drjordan (Dennis Jordan) October 22, 2017, 9:01pm #9

There is a switch on you control board that is marked CW - TTL, make sure it is in the TTL position. The CW position is constant wattage.

Ok I go that a bit later but I figured out that my start and stop command was M03 and M05… I changed it to M3 and M5 and now it’s woeking right!!! Only took me two days to figure all this out…lmao

My question is with glass/bottles. The laser is just burning through the other side, what do I need it to do to etch glass.

So far I have had the same experience with glass. I did read somewhere where some glass contains metals to help strengthen it and if there is too much metal in the glass it will not etch. I have recently purchased a couple of cheap picture frames from a dollar store to try but haven’t had time yet.

For what it’s worth here is the grbl documentation for laser usage: