Here she is. My XL, just built, has not cut anything but I’ve run the Hello World with a sharpie (My son wanted to color it in).

I mounted a new 3/4" waste board to the included waste board with 4x 1/4" pan head machine screws. I used a regular countersink drill bit to drop the screw heads down below the surface of the MDF. Used a washer and nut to secure each screw to the bottom of the included MDF.

I bought 50 threaded inserts on amazon and made a 5x10 grid. I had to experiment on some scrap MDF with different bits, depths, countersinks before I came up with something that worked well. I’m going to 3D print some clamps out of PETG tonight. 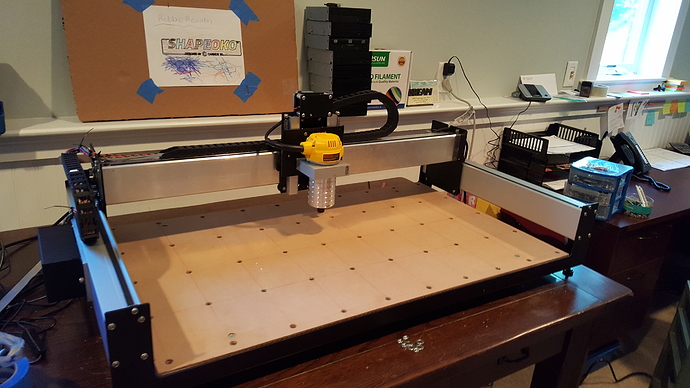 It took me about 2 days, 4 hours each day to build the machine. I really took my time and didn’t rush anything. I ran into a few problems but was able to solve ALMOST everything.

You may need to wake up the micro switches by manually pressing them several times. I had the same issue at first. Seems like the internal contacts need a little help.