Kanji stamps on the Nomad Pro 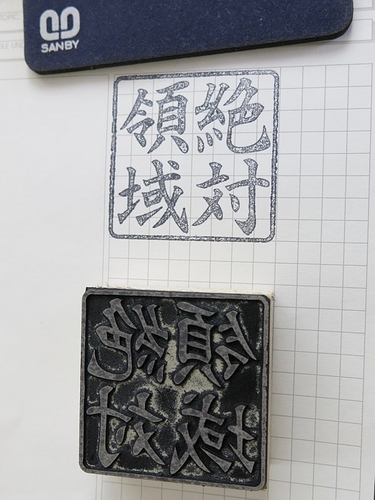 One of the things I most wanted to do with CNC was carve seals for some martial-arts instructor friends. In the past I’ve helped them order name seals from web sites in Japan, and written a script to layout square seals in Illustrator to send to American rubber-stamp dealers.

This 2-inch seal was designed in Illustrator with my script, imported to VCarve Desktop 8.5, mirrored, and v-carved with a 20-degree v-bit, using the #102 endmill to clear the open space. It took about half an hour to run, with a lot of wasted time retracting the bit to the default 12mm clearance height. (lesson learned!)

After deleting the original border from my script and recreating it in VCarve with a roundrect and the offset tool (because I didn’t like the thickness), I selected the inner border curve and the four kanji and set up a 1/16-inch v-carve toolpath with the v-bit, using the #102 for the clearing pass. Then I selected the outer border and told it to profile the outside edge to a depth of 1/8-inch.

This was a perfect job for the Nomad vise… 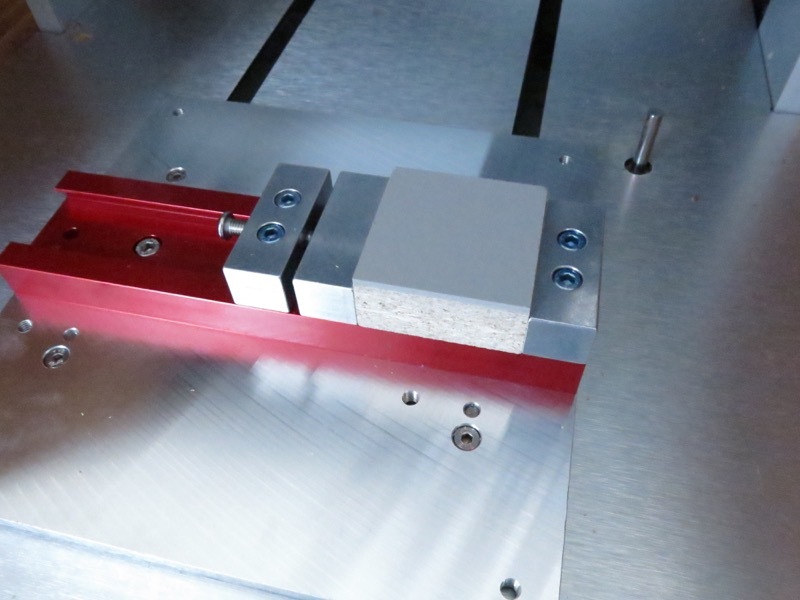 Here’s what it looked like after the clearance pass with the #102 bit: 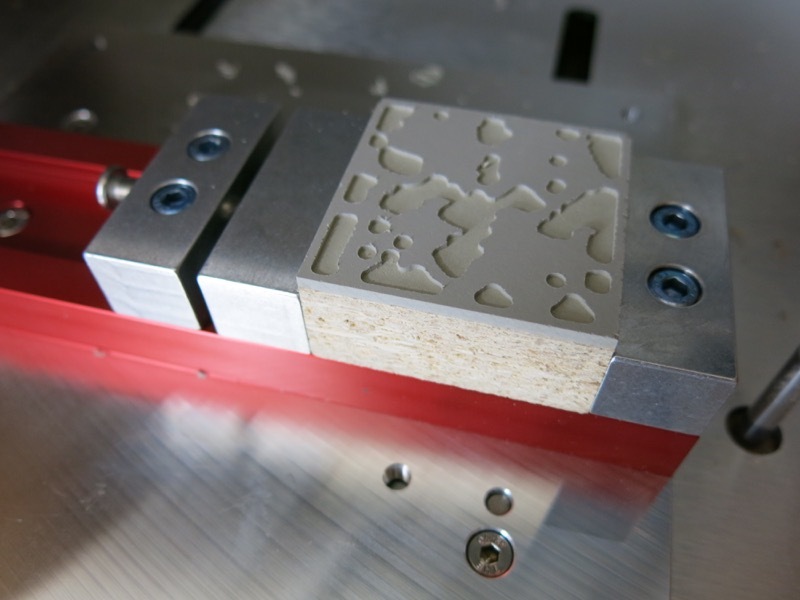 The finished seal, cleaned off with a stiff-bristled brush: 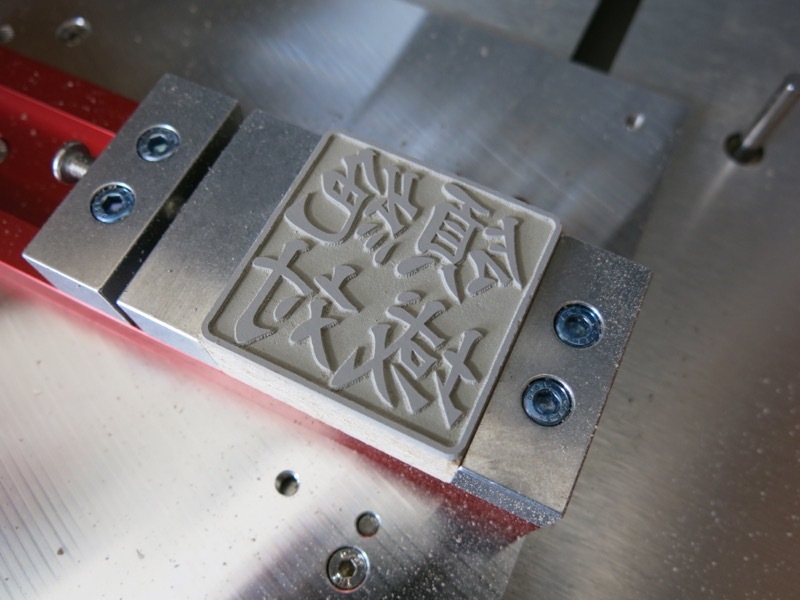 There are still some lino crumbs, but they don’t affect the output. I think when I make them for instructors, I’ll just run the pocketing toolpath a second time to clean them out.

The 2x2 mounted lino block is from Bangor Cork, only $5.40 for a pack of 10. The v-bit is an EnPoint 20-degree carbide engraving v-bit, $20 for a pack of 5 on Amazon. The font is Hakushu Kaisho Bold, bought from imagenavi a few years back (no longer available there).

By the way, for those who don’t read Japanese, the carving on the stamp (絶対領域) isn’t particularly profound… 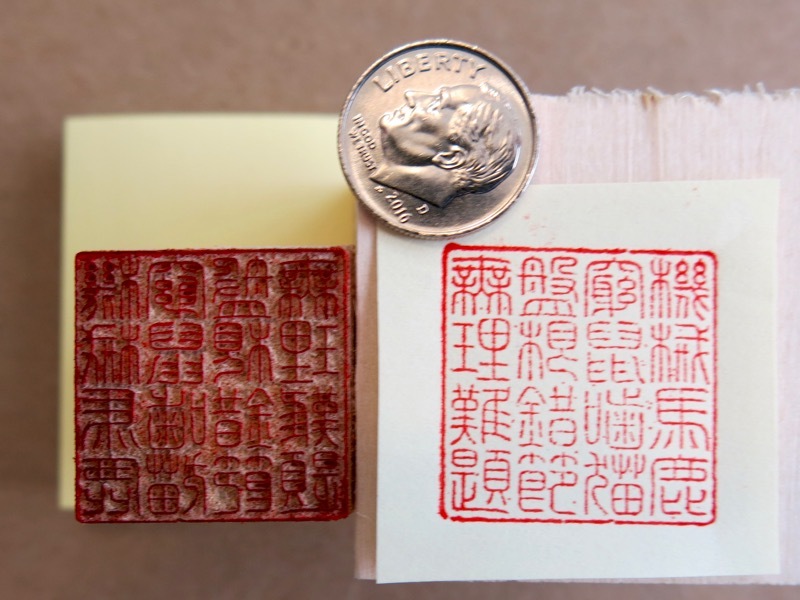 Stamp #2, carved from a 1-inch generic-hardwood square dowel. I wanted to see just how much detail I could get with the 20-degree bit, so I crammed 16 kanji into a 0.95-inch stamp, using a very traditional Tensho font. I used the plywood feeds/speeds from the Carbide3D chart (0.034" DoC, 7800 rpm, 50 ipm feed, 22 ipm plunge), and it was packed so tightly there was no room for a clearance path with a larger tool. It took a little over 20 minutes to cut, and I’m glad I reduced the retract height to a quarter-inch, because the toolpath contained a lot of “single-point plunges” to clear out the space between strokes (I actually thought CM had gone into an endless loop for a minute…).

I surfaced the end with a #102 bit before v-carving, so I think the fainter ink in the center is just user error in the inking and stamping.

VCarve Desktop took about 6 minutes to calculate the toolpath, which is 5 minutes longer than their default timeout.

(I picked four four-character expressions based largely on their complexity, but the one on the right, 機械馬鹿, means “person who gets a great kick out of tinkering with anything mechanical”)

Thanks for the detailed sharing! Those of us new to this really appreciate your work and the explanation/detail about it! BTW do you know of a website that translates Kanjis? Thanks in advance! WTS

For general-purpose word and kanji translation, use WWWJDIC; this includes links to Ben Bullock’s tools for identifying kanji, and also a list of four-character compounds/proverbs. If you can get a clear picture, the Google Translate iOS/Android app can handle standard fonts, although it can’t always tell the difference between columns of text and rows (for instance, to get it to correctly read my first stamp as “absolute territory”, I had to mask off each column in turn).

If you want to find appropriate kanji for some use, and don’t want to get laughed at on Hanzi Smatter, always ask someone who speaks the language and has no reason to pull a prank on you…

Thanks-I can easily see the wisdom in your last Sentence! I have successfully used Google to translate for limited conversation but not for Kanjis. I have a couple of kanjis my father was given by friends in the 50s that I would like to understand… I appreciate your help!
WTS