Started making signs with just names on them. Seemed like an easy place to start. Was on the final cut and the thing lost position. I’m so frustrated at this thing I can hardly stand it. Please, any advice is welcomed. I’m tired of scraping wood. Is it a possibility that carbide create is just a poor software and loses connection to the machine?

What do you mean by “lost position”, did it stop mid-job and if so did you get an error message in CM ? Could be a USB disconnect, and if it is it is likely a grounding issue (which then calls for hardware tweaks, CM cannot do anything about it)

No errors just took a different path on the finish cut

Oh. Then it is either something wrong with the Gcode itself (did you double check it in a visualiser ?) or a mechanical issue like skipping steps if some axis is loose. Any suspicious noise when the job goes wrong ?

Nope, everything looked good sounded good everything axis wise looked great! Been having this issue since day one. I’ll post the part, drawing, simulation and program this afternoon. 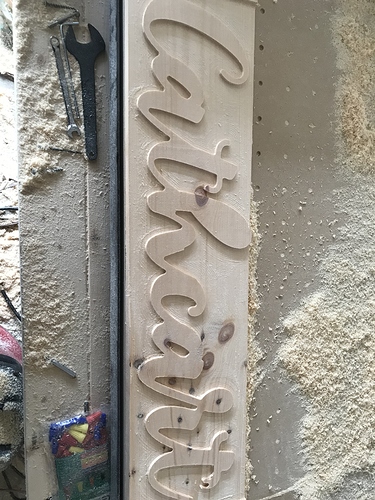 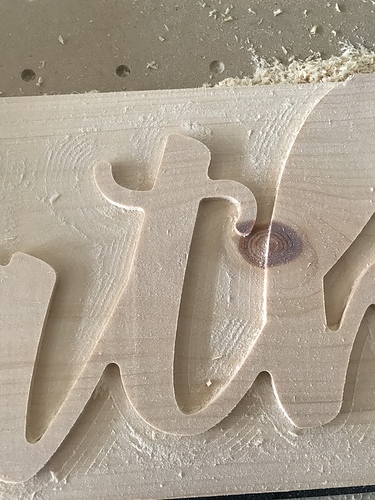 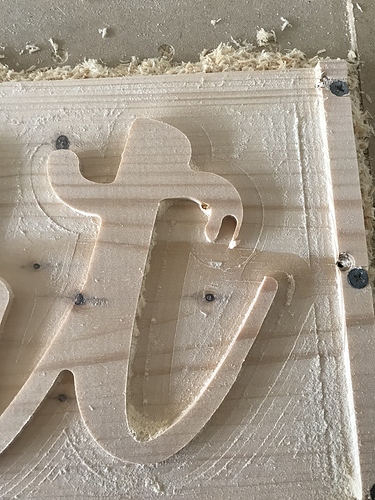 G-code is clean (I checked it using https://nraynaud.github.io/webgcode/), so must be a mechanical issue. A few thoughts:

you mean you used the feed override in CM and set it to 10% of what carbide create generated ?
It seems to work for you but generally you should adjust the feedrate/RPM combination to preserve the same factor as the original values that CC came up with

=> If I were you, I would try a run without modifying feedrate, setting the router at the min setting (Dewalt) or 2 (Makita = 12.000) BUT using a 0.05" depth per pass: if the problem disappears then it is definitely a case of too much force being put on the endmill/belts due to too high DOC.

I’m trying to figure out how to calculate all that. I’m still going off recommending feeds and speeds. And formula or anything?

I have made a few notes to myself on this topic here, but basically it boils down to

and you should try to preserve a given chipload (assuming it is a good value in the first place…), i.e. if you change the feedrate, or the endmill type (1 or 2 or 3 or 4 flutes), or the RPM, you should update the other parameter(s) accordingly following the formula above to have the same chipload value.

Since CC has the annoying habit of coming up with sub-10.000 RPM values (since it uses Nomad values, really), I have used this formula many times to adjust feed rate, and also used it when I happened to use an endmill with different nb of flutes.