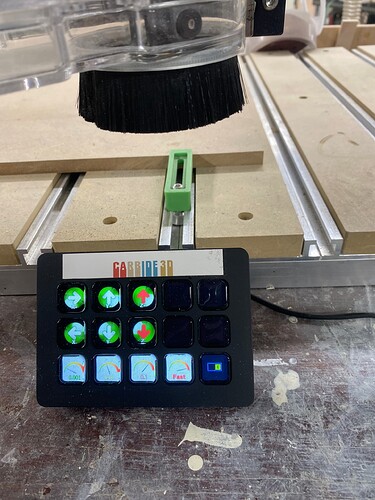 image1920×2560 413 KB
I am programming a jog controller for Carbide Motion. I have found keystrokes to control X,Y,Z and speed, but I am looking for the other controls such as spindle on, set zero, rapid position, probe, or menu list commands. I know this question has been asked in other forms, but maybe a feature request for keyboard commands for any on-screen control if they don’t exist?

There aren’t any other keyboard commands (and even the two nifty joystick button commands for speed increment slower/faster aren’t exposed as keyboard buttons unfortunately).

Back in the days of Carbide Motion 4, one enterprising soul took advantage of the API to set up a very nice pendant using a Stream Deck:

I got a stream deck after seeing David Johnson (DIY Engineering) using one. Sometimes I get overly obsessive about stuff… Anyway 3 weeks later and many false starts and I have a pendent with status for DRO for location, override, velocity, homing, quick location, zeroing, probe, file loading, run, pause, stop. Very early alpha version but working. One thing I didn’t implement was animated icons, maybe later. There’s no configuration or macros. It’s about 2500 lines of C# code directly in…

but that’s not an option w/ CM5

If you’re comfortable working a little lower level, the UI is written in c++, using the QT framework with the signals and slots. Using some reverse engineering, you can find the ProbeDialog::on_beginProbe_clicked() and PaneJog::on_rapidSE_clicked() slots. The slots let you interact with the UI event loop and mimic that the user had actually performed some action.

Thanks! I retired from IT so I’m ok with code, but I was looking for something a bit more practical so I can woodwork and not code…

I decided to use a macro recorder that can emulate mouse actions. I then used a companion app to assign the actions to hot keys and call them from the Elgato Stream Deck.

I can now access anything in the app that makes sense for a pendant control.

Home of the Text Expander PhraseExpress, the Mouse and Keyboard Sharing software ShareMouse and the Automation solution Macro Recorder