Hi guys, I feel it’s been a while since I posted anything useful so I wanted to expand on @Vince.Fab topics around machining aluminium along with peoples use of fusion 360 and adaptive tool paths. I appreciate many will be inspired by the shiny aluminium parts that have been floating around here as late, with many curious of how best to use fusion 360 for 2 sided and more complex milling operations…

With that in mind I have pulled out one of my old files that needs a number of different milling operations.

I thought those interested could all download the file, create your tool paths, re-share then explain your logic. It might prompt people to think of other ways to machine stuff…

The part in question has no use for most people but has some interesting elements.

Here is the file 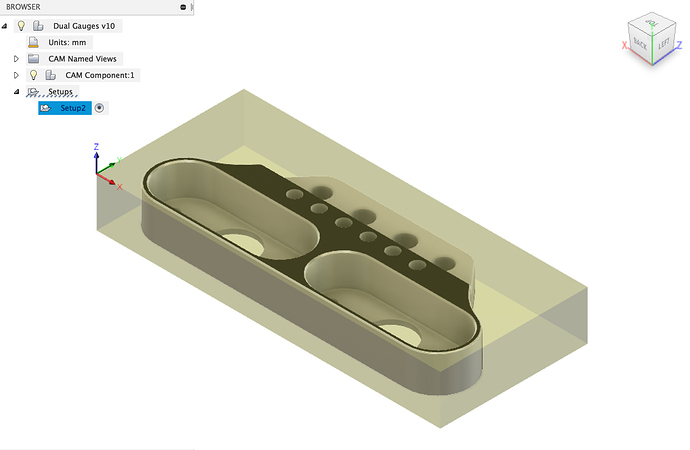 But seriously, thanks for sharing - here’s to shiny parts!!

This could be fun and interesting. Do you have a desired finish on certain faces? Is machine time an issue? We use our own tooling or use a standard endmill(s)?

I like this idea but I really like the idea of a part everyone can actually try to machine instead of just throw out toolpaths.

A fun challenge of sorts

Well the actual part is a dual gauge motorcycle speedo mount so finish should be as good as it can be. You can take as long or quick as you want.

You can use whatever tools you want as long as they can be used in the shapeoko.

The idea is is to get us all thinking about tool paths and ways to optimise them. I made and fitted this part well over 2 years ago now, I just figured it had an interesting design with a few interesting elements…

Here is a quick look at mine…

i had to manual change the file name to have fusion open.

Heres what i put together quick like a bunny. I changed the stock setup so 2 op with softjaw and face to final specs. Setup to be held in a vice with with a 0.200 step. Accidentally left out an initial facing, left out the chamfers as ive never used a chamfer mill. Need to have an reduced neck 0.125 cutter as well, can be handmade. Left 10 thou radial on the roughing that was cleaned up with the two contour ops.

The contour fillet section was a little weird, ide have to try some things in real life. There are many ways to accomplish this cut including sketching out constraints or Avoid/touch

Imo if we have a design that everyone can be interested in and try to machine we would get much more interaction and involvement.

Hey thats not a bad plan actually, any suggestions?

Here’s a tool diameter independent corner probe I was planning on making. (got the idea from @patofoto):
https://a360.co/2O8Lo3k

Once I get it made, I’ll hack out a CNCjs macro for using it.

5 Likes
Aluminum - I think the stepdown is a bit much right?
First aluminum fail, figuring out why
Nomad 3 BitZero
Feed and speed for Aluminum no flood or air
patofoto (Patricio Suarez) October 7, 2018, 11:40pm #11

Love it @neilferreri!!!. Looks great. Good project for someone who wants to build their own probe. I have some aluminum at hand. Maybe I will make one. Seems like the right design as it will not need the input of what endmill you are using. Just a thought. Would it not be more efficient to make the hole somewhat smaller. This will make probing faster as the travel time will be shorter. Let me know when you start testing your macro. Will build one and help test if you like.

Which curvature do you mean?

Can you write a macro for findi g the centre of a hole?

No, but I can write one to find the center of a hole.

Macros are for CNCjs:
Hole Center (tested).
3 axis diameter independent for probe plate of style I linked above (untested until I make one).
CNCjsHoleMacros.zip (1.7 KB)

First, thanks for yet another contribution to the community. Next, another of my ignorant questions, what will be the electronic component?

I’ll be cutting one soon for practice. You might want to submit this design to Mr Beaver for his toolpath exercise since it’s relatively small.

what will be the electronic component

Probe pin on controller to the aluminum corner probe block. I was going to drill and tap for an M3 and then use an alligator clip. That works well for my current, hole-less, one.
Ground on controller to endmill.

The hole center macro will work on any hole in a conductive surface. Could be really useful for referencing on a previously made part.
The other macro should work as an automatic 3-axis corner probe, with any endmill diameter (even tapered and V).

@patofoto I decided to go with the larger hole to accommodate larger diameter endmills, but if you resize the hole the macro should still work.

There are “User defined variables” at the top that can be adjusted per use case.

For those interested, the macros are decently commented to show my thought process.

I’ll be cutting one soon for practice.

If you accidentally cut two, let me know.

Ah sweet! Can you detail the macros actions?

Updated ZIP file above. I forgot to take into account the Z thickness.

Can you detail the macros actions?

Simple Hole Center Finder:
-start with end mill (probe) in hole, below surface
-on macro start, it will double-tap probe positive X direction & store location as X_RIGHT
-retract toward center
-probe negative X direction & store location as X_LEFT
-Difference of the two locations gives you a chord length
-Moves to midpoint of chord and uses a G10L20 to set X0
-Repeat steps with the Y
-X0Y0 will be at the center of the hole

Probe diameter does not matter because the center of your probe is the same distance inside the left & right sides of the hole when it touches. Either side of the hole is always equidistant from the center (that’s what makes it the center, I guess). It doesn’t matter what chord you take (where in the hole you start the probe) because the X centerline is the same for all chords parallel to the X-axis.

The 3-axis probe does the same thing, and then it adds:
-a variable that stores the hole diameter (calculated from probing)
-a Z retract (user defined) to clear surface
-a positive XY motion to a location to a distance (user defined) from hole
-a double tap Z probe with a G10L20 storage of Z0 (including offset due to probe thickness)
-a Z retract (so you can remove the probe) and move to X0Y0

Both macros are a click play and watch it happen.

By the way, I didn’t mean to hijack the thread. I just thought toolpaths for a 3-axis probe would be a simpler exercise for comparison.

Please consider that I don’t even have a cnc yet, but I’m familiar with machining, the cutting bits and programming in general.

About this macro, it comes to mind that due to the geometry of a router bit, several more “touches” inside that hole are required to assuredly determine the chord length across the diameter.

Of course, it is possible that the bit will be geometrically oriented correctly on the first touch, but not assured.

due to the geometry of a router bit

True. Just like any time we use an end mill as a probing tool, everything assumes that the tool is a cylinder. Ideally, you could chuck a precision machined rod.