Machine stalls on itself

Usually this is EMI — could you directly transcribe, or post a screen grab showing the messages you’re getting?

I didn’t get any pictures of it, pretty stupid of me.

Wish I would have, sorry

EMI as in my router cable interfering with the machine? I’m very new to CNC routing so I don’t know 110% of everything yet.

EMI as in electromagnetic interference caused by static or some other electrical disturbance.

Best thing to do is to test for this by running an “air job” w/ the router and vacuum off — if that completes, then you know the file is okay and the machine itself is working properly.

Please contact support@carbide3d.com w/ all the details and we’ll do our best to work through this, or see:

I’m very new to CNC routing so I don’t know 110% of everything yet.

You can be an expert in CNC routing and not know 110% of everything!

Welcome to the place you can learn an awful lot from, though!

Think every day is a school day here. I always read through the forum as there are a lot of little tricks and tips you pick up from others to help you on your journey.

Did an air job last night and everything went perfect. Almost positive it’s EMI at this point. Is there any good way to run the router cord somewhere that it’s no where near the motor cords? I was maybe thinking a tower over the machine and have a bungee-system with the cord. Any other ideas?

Thomas,
First, Will Adams’ answer is probably spot on.
I had the same issue on my XXL and confirmed it as Electro Magnetic Interference - EMI. The hose on my shopvac was creating static electricity as it sucked the milling bits through it. I initially had that hose hooked up to my dust boot. When the geometry was just right the hose, loaded with static electricity, would touch some part of the carriage and SHUTDOWN. (While a great Beach Boys song, not good in the CNC world.) Changed the hose and resolved that issue. Then, without thinking, used that shopvac to clear the accumulating chips while a job was in process. And got the carriage again. Stopped that practice. Now the hose to the dust boot is non-conductive and I use air pressure to clear the bed while the XXL is running.
I installed secondary grounds on the carriage and control box but do not want to even try testing it.
Good luck,
Rex

I run mine up to the ceiling through looped bungie cords along the dust hose. 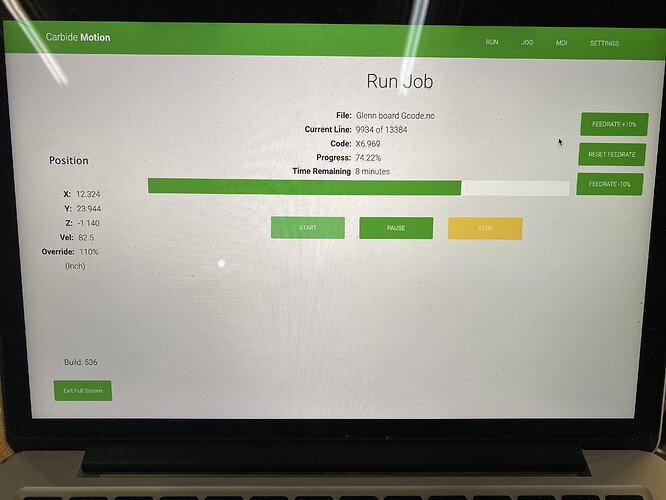 image4032×3024 2.55 MB
Stalled on me twice again with the router cord removed. Running the air test did just fine last night. Is there anything about my set up that might be messing with it? Carbide motion becomes unresponsive when it stalls out. Any other solutions out there? Never touched anything on the machine when it stalled, just does it on its own.
thomas_oehlke (Thomas Oehlke) March 12, 2021, 9:29pm #12

Were you running a shopvac during that job which got interrupted, and maybe vacuuming manually (you don’t use a dust shoe from what I can see in the pic) ?

A few common tips to mitigae disconnects are here, but I would start with checking the grounding of the machine, there is an excellent thread (and video) from @LiamN here:

Nice looking shop.i like to look in open garages.

I’m running a carbide router right now that’s not grounded. If I upgraded to a Makita with a 3-prong, that’d ground my z carriage as well, right???

I don’t believe that Makitas are available in a version w/ a 3-prong (grounded) cord, since like most hand tools they are double-insulated.

I don’t have a vacuum at all connected to it. I just want to find a way to ground the machine without a vacuum or dust collector for now. Dust collector is another purchase down the road but as of now, what is the best way to prevent disconnects due to static?

Run a wire from the router body to ground.

Think that will take care of everything? Even the machine stalling?

If the stalling is caused by an EMI disconnect, it should. If not, it’s one of the more effective solutions, see:

or write in to support@carbide3d.com